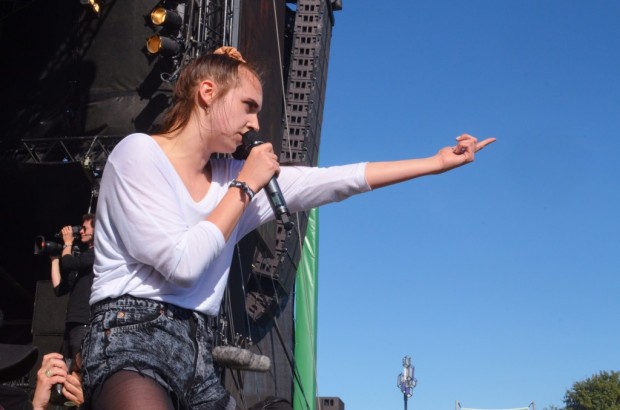 NOTHING BUT HOPE AND PASSION visited the NORTHSIDE FESTIVAL 2014, the biggest Danish festival in the peninsula of Jutland. The Danes are preparing for Roskilde Festival, which will be on in exactly two weeks. Though not comparable to Roskilde, the line-up turns always up with big international artists and bands. However, at this edition, the great performers were indeed Danish bands…which made Danes quite disappointed as they are used to see most of them live throughout the year anyway and they look for the international famous names. But for internationals, as we are, the Danish bands made it worth coming. Disappointment was probably more between the male audience. A Danish tabloid magazines titled: ‘Northside, where the hell are the boys?’ as the performers were mainly defined as belonging to ‘girls music’. LANA DEL REY, A$AP ROCKY, ROBYN were meant to attract Danish teenagers, whom actually occupied all day the front lines, under the sun, til they could touch the hands of their idols. But we swear, we’ve seen boys cry. Following our report from day 1, here are more impressions from Saturday and Sunday.

Third time in a year I saw MØ on stage, the second at NORTHSIDE. It’s always a pleasure. The first time she did not jump, stage diving is prohibited. But I believe she got this habit now and also this time, she could not stop. She jumped twice, addressing the audience were to direct her and eventually she walked through the fans without stop singing. She performed the songs of her debut No Mythologies To Follow and a cover from SPIRCE GIRLS. No surprise since you can tell from her new single and video how she’s attached to Mel C. Her festival season just started, and in two weeks she’ll perform at Roskilde Festival. I must say, I don’t want to miss this, sure it will be as energetic and great and it use to be.

Zaakir blinked at me. I am not lying. And I am not pandering when I say they delivered a great performance. The old school hip hop crew gave the audience what they wanted: great fun, chilled time and a nice revival of the old days. The sun was shining high and the public could not enjoy better the reggae hip-hopish sounds. They could see so many young faces were in the crowd in front of them (‘In 2000, when I had a six-pack and you were not still born’ said chabby Akir), but between them, many considered JURASSIC 5 a legendary band.

During his first song he ran around the stage few times, from left to the right, while a crowd of girls in the front lines were getting their phones ready to shoot him. Then like a magician, he took a bra off his sleeve, I believe in accordance with the lyrics of the song he was rapping. Truly happy. He sounded very happy to be there, and many times he mentioned he would have sang a song more, because we were so cool. I did not actually paid attention to the time, and whether he played actually more than he was supposed to, or was just fooling us all around. I was mainly focusing on saving my life from the mosh and pits he instigated quite a lot of times. But in all of this I quite noticed, he forgot to rap.

I stood next to the first line to take pictures with the rest of the photographers team, close to girls who did not believe what was happening. I am not talking about a teenage band, but some old fellows that did not release a new album since 2009. But the Danish generation of 24-30 years old grew up with their songs and amazing indie rock albums and could not believe that they would play live soon. But they also made a big announcement. A new album coming up and their old bassist, Johan Wohlert was there to play with them. The audience went just crazy, tears came up from many girls a boys assisting to a magical performance, whom they waited for a long time. 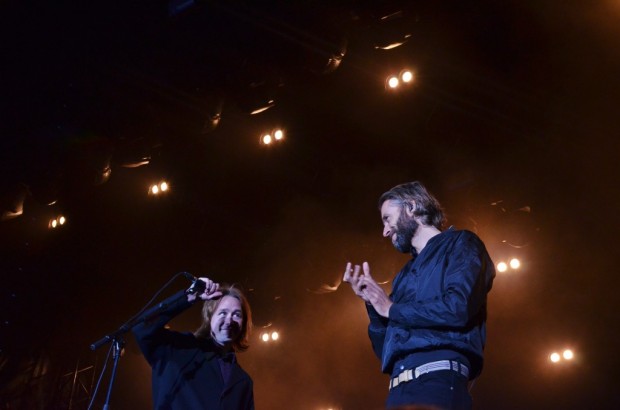 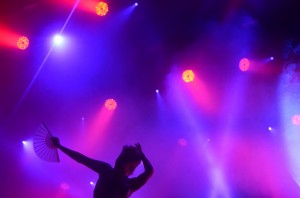 Nobody knew what to expect: they had only released 6 songs together, lately: would it be the shortest performance of the whole festival? But instead they played for an hour and a half: first RÖYKSOPP with its electronic sounds warmed up the audience, to then give full space on stage to ROBYN. The eclectic Swedish singer performed her most famous hits, though incorporating a sort of a jazzy and slow paced sound instead of a dancy beat. Those who wanted her to replicate Call your girlfriend dance have been a bit disappointed. After an hour, the two artists re-united starting with None of Dem and then playing all the songs of their new collaborative EP, while ROBYN was moving sensually on stage playing with a fan. The object though, was not an actual person.

I arrived late for their performance. But I biked through the city ’til the festival site, hearing live Out Of The Black. It was amazing and although two kilometers away I could not but feel the energy of this young band. I believe I’ve never biked so fast. Reaching the stage I could get to the last part of their impressive performance. Incredible execution and energy for such a young band whom create music perfection just with vocals, a bass and a drum.

They closed NORTHSIDE FESTIVAL 2011 and at that time I have been quite disappointed by their perfomance. I was not expecting it but it happened again. And in this occasion, the fact they mentioned Denmark as being a second home seemed to me quite of an attempt to still appeal to the audience. The music part was well executed but the voice of lead singer Harry McVeigh made a lot of effort to keep up with his own songs, both for the newest and old hits. 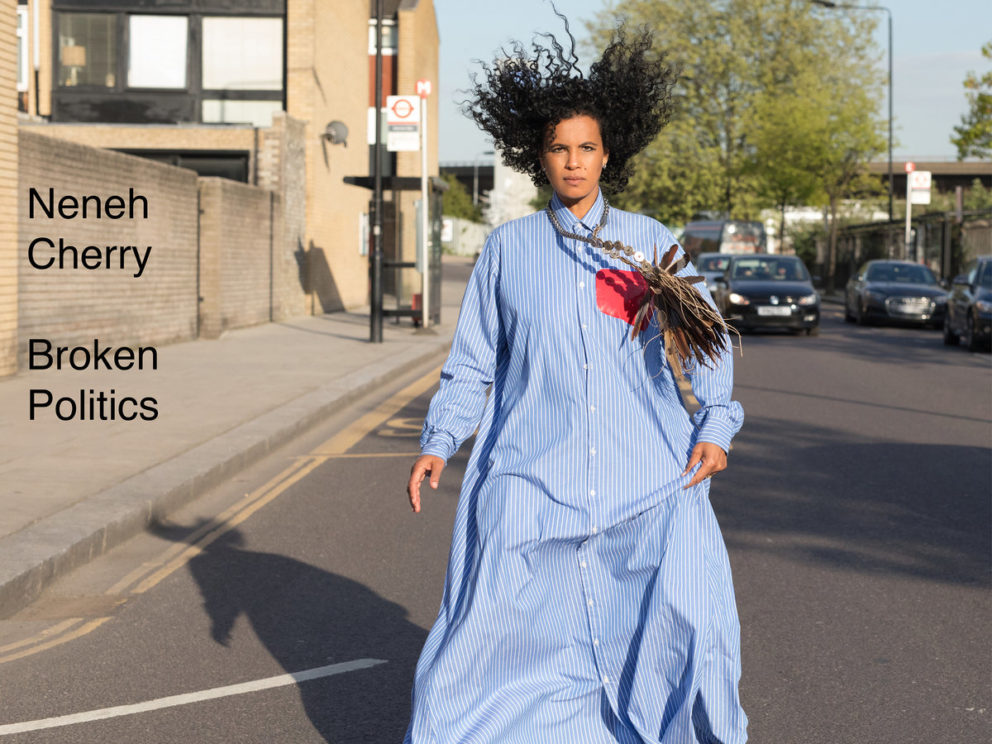 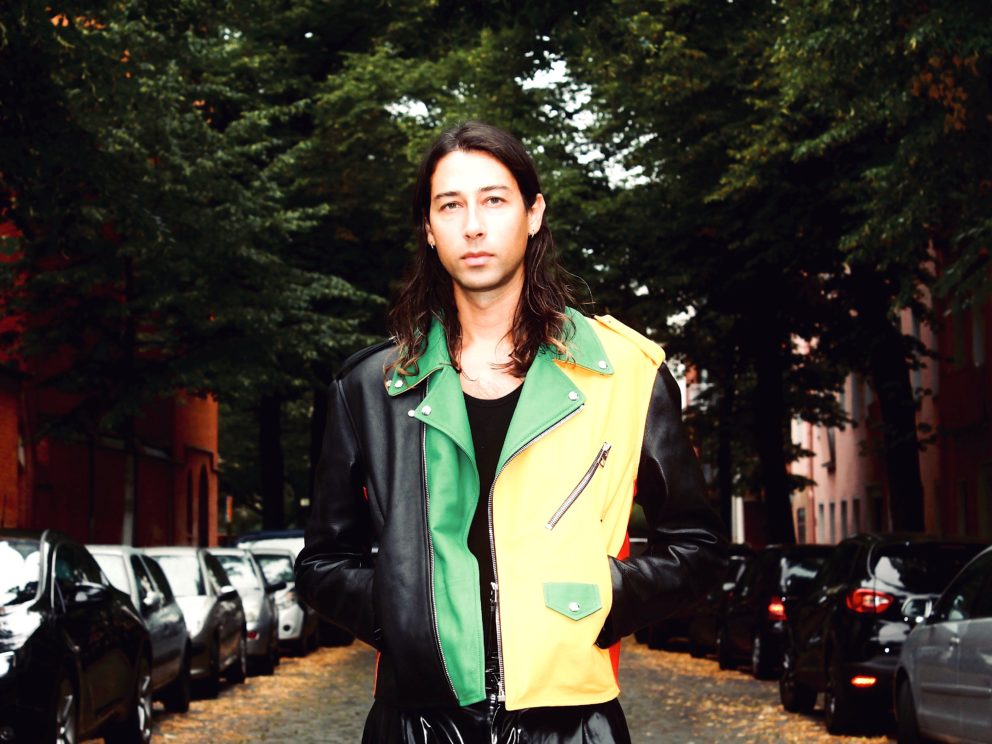 Embracing Time, Loss And A New Sense Of Freedom: A Thoughtful Reflection By Kindness

In recent years, it would have been easy for Kindness to push themselves to the fore. With as many talents in their pockets as Adam Bainbridge and a long list of musical activities, high profile collaborations and various spectra covered such as writing, producing, djing or having their own radio programme, the limelight was right there. However, Kindness chose to let their work speak for itself mostly from a position in the half-shade . And it did. Rather soft-spoken in general, but always determined, profound and open-minded.