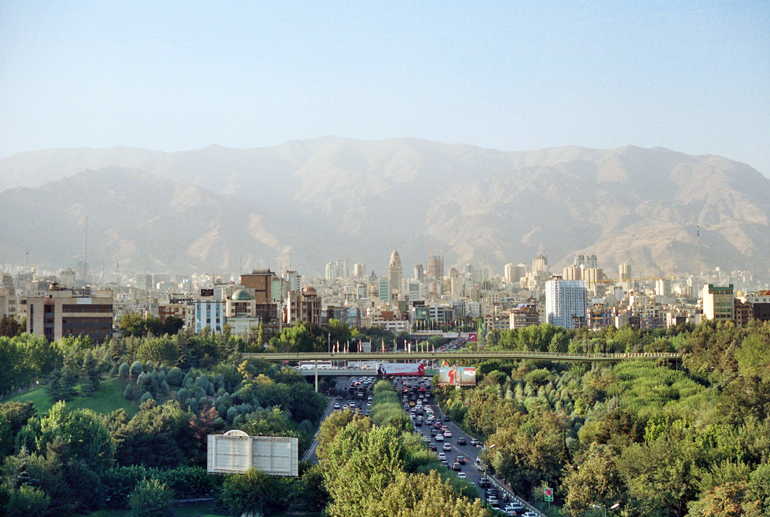 Tehran – Iran in general – is everything you wouldn’t expect. The common media point of view on Iran is to consider it a dangerous islamic place where you shouldn’t go. Indeed, when you’re over there, you can only admit that there aren’t that many tourists. You thought Iranian would be an ethnocentric people? They’re – by far – the most mindful people I’ve met travelling the world. Couchsurfing there is really easy as people are coming to engage you in the streets, you don’t even have to always make the first steps to meet new people despite the fact that you’re a stranger.

You thought Tehran would be an under-developed city within the middle-east? The infrastructures are crazy, with a modern and fast subway, and hyper fast GSM internet in most places.

Iranians reading this introduction would laugh at how crazy it is to have to introduce Iran by saying this. But coming from a country merely seen as a medieval piece of land producing cheese, fine wine, and baguettes from an US perspective, I can only feel what it’s like to be secluded from the world and not being understood. But those time might be coming to an end, and we’re going to explain you why Tehran could become one of the world’s most important crossroad when it comes to culture, creativity, and entrepreneurship. 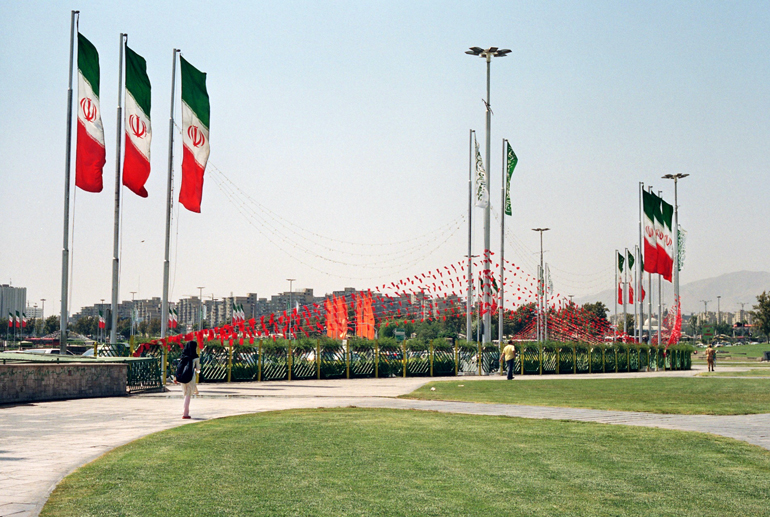 A progressive city within a complex and vast country

First, let’s understand the state of Tehran in a much wider Iran. Iran is a diversified country, with very different biomes (from the rainy coasts of the Caspian sea to the burning deserts, through several enormous mountains). And so are Iranians, therefore we’re going here to talk about Iranians from Tehran, who can be very different from other iranians. Ispahan, the second most important city in Iran is also the ancient capital of Persia. People from Tehran are generally more progressive and more open-minded than Iranians from elsewhere. Renting places in Tehran is relatively expensive, something close to what you would be paying in Berlin for the same size, but consider that the average wage is 4 times less important than in European standards.

The economic sanctions also make certain products being way more expensive than in our western countries. One of the most important thing to take into account is that Iran is disconnected from the western world mainly because western banks are forbidden to go there. Your credit card won’t work there, and so are any possibilities to export and import many activities.

Because there are no monetary links, it’s just not possible to sell your music abroad for musicians.

On the other hand, the next iphone is available in Iran the same day as everyone else in the world: companies aren’t allowed to go there, but fake stores in malls sell authentic products and have some sorts of agreements with western companies. The price of the same car model in Iran is in average three times more expensive than in western countries. And you know what? It might be the country on earth outside France where you can see the most Peugeot and Renaud.

That’s something important for me. 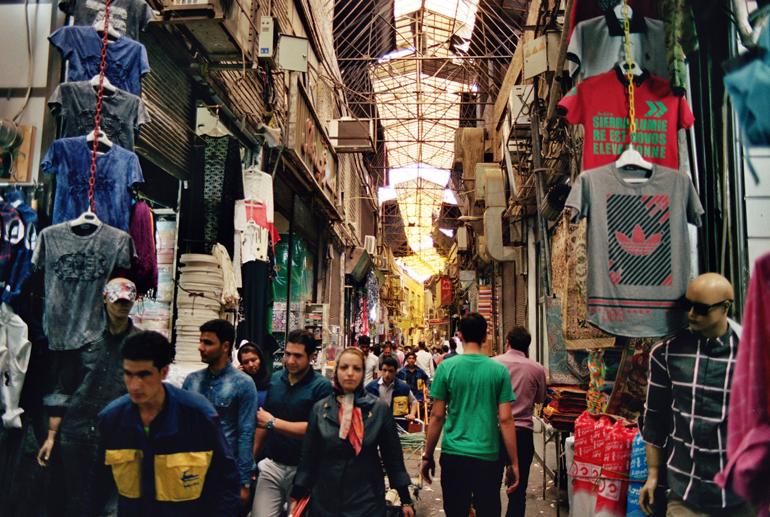 Then there is the regime. When you’re an outsider and you’re looking for cultural elements of Iran, there’s a crucial switching year. In 1979 the regime of the Shia fell down in favour of the islamic revolution. If you look for musical movements within Iran on the internet, you can easily find tons of psychedelic rock compilation from the sixties and seventies, but close to nothing after 1979. Without going in too much details, many elements that make a cultural life burgeoning also disappeared with the new regime. Dance is for example forbidden regarding Iran’s laws, as well as having strong regulations on clothing (for both male and women) and female artistry life. So many of the cultural movements of the last 35 years in Iran were underground, and we have to admit that with our few weeks in Tehran we’re still underqualified to develop that subject. But despite this enormous time gap when you dig Iranian music on the internet, you can also find many recent productions. 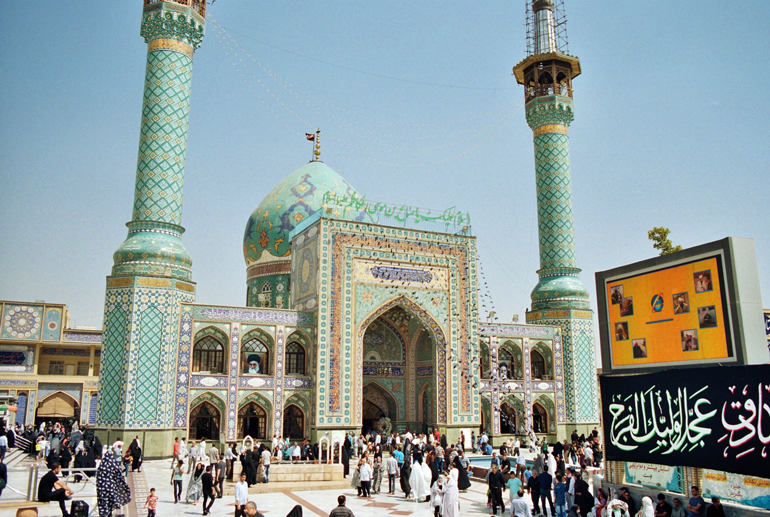 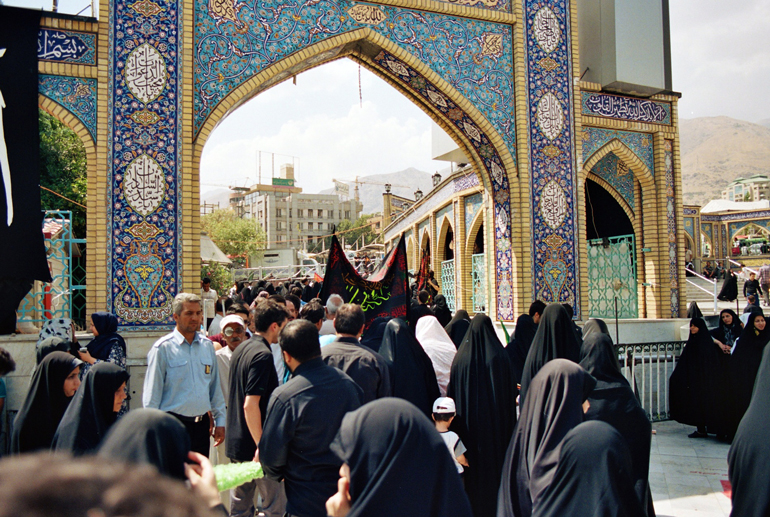 A treasure place for electronic music

I met ATA EBTEKAR, one of Iran’s most brilliant electronic composer. He has been growing up between Germany and Iran, and have been a college art teacher in the US for another period of his life. He is a former Warp Records artist, and his most recent projects include collaborating with The Iranian Orchestra for New Music to create experimental music inspired by the quarter-tone spirit of the Persian music.

About the state of Tehran, he told me:

I actually came back 9 years ago, and tried to do this same thing: be active and release music. But there were no platforms, there was a different government. There wasn’t any experimental music scene – whereas nowadays you can hear about an experimental scene here. Playing my music here went really smooth actually. My music isn’t really easy to approach and I was expecting the crowds to throw tomatoes at me. But the reception was amazing. It was not only people coming from an electronic music background, and I had standing ovations and stuff like that. I was astonished.

Indeed, since Rohani came into power in 2013, the progressive movement within Iran’s political forces had the chance to reform Iran. It has the goal of opening the country to the world. Rohani has been emphasizing a startup environment and is way more tolerant on what’s happening within the art scene. Repression still exist, especially if you’re rapping or doing any kind of subversive art. But nowadays it’s very possible for an Iranian to launch his own music label and release electronic music for example. You still have to make your works examined by the ministry, but many art fields do not suffer much from the regime. 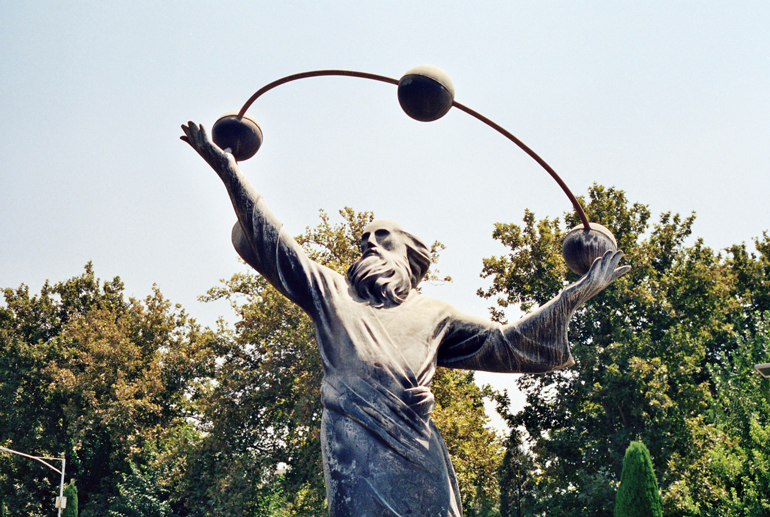 ATA EBTEKAR isn’t alone in what we could clumsily called the renewal of Tehran art scene from a foreign perspective. To be more precise, it’s the contemporary art scene that is really burgeoning. You might find more experimental electronic musician in Tehran than in many western capitals, and curators from within the scene try hard to make it surface the outside world. Shout outs to our friends of The Lake Radio as well for their fine curation. Fine arts are also a big thing in Tehran, with hundreds of art places, especially in the north of Tehran – the richest part of the city, close to the mountains (you can even ski on these at winter).

Another important element to understand why Tehran is going to become such a shining world cultural place is to analyse his demographic data. Iran is a really young country, nearly two third of the population is less than 30 years old. Tehran has a crazy good rate of students getting advanced and superior diplomas in many different fields. This youth is a very curious one, open-minded and clearly tech-savy. They know how to use VPNs and access forbidden websites, from Facebook to Tinder. 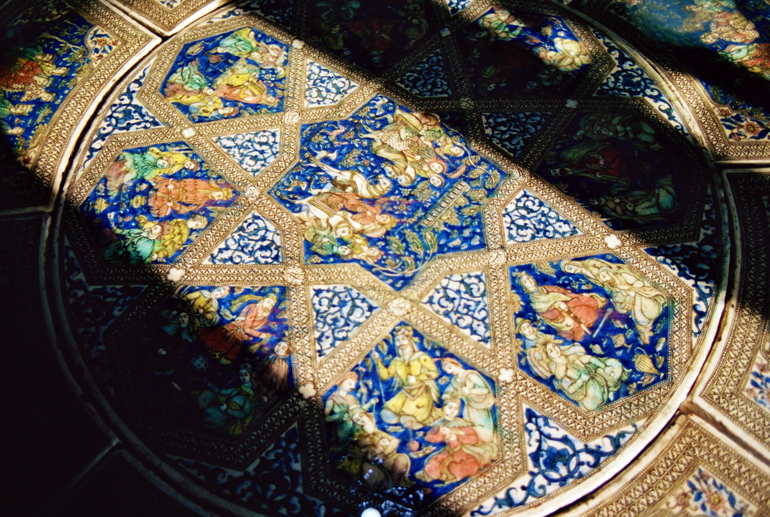 Persian arts are something quite unique. We’re very unqualified to talk much about it, but you could still sum it as something very maximalist and intellectualised. As a french, I felt quite a natural connection as how french culture was trying to express itself. What is really striking about the Persian culture, especially in the music scene, is how much they’re influenced by cries. Traditional music I was able to witness within auditoriums were lots about crying and mourning, in an astonishingly beautiful way. We can’t really say more about Persian culture, if not that it’s millenaries old and super complex. As a modern example of that appetite for melancholy, PINK FLOYD is really popular amongst the population. Going into a district music and poetry reunion and being the only westerner there, I was greeted by a beautiful cover of Numb.

Here is one of my recording of these events.

Tehran is definetely on your to-go list, and you wouldn’t want to see the beautiful hatching that is going to take play. We concluded that discussion with Ata like that:

For me it has everything to become one of the world’s leading creative city in the coming years. And I say that while having visited cities such as Buenos Aires, Lima, Berlin or London this year.

Yeah I agree. We have the rich history of Persia and people often neglect that. We have a strong literature, poetry, architecture and music. Why not taking it to the next level?

We had no choice if not to curate some of what we were listening during our time there. Some are local artists we might meet in our next travels to Tehran. It’s only the first time that you hear about Tehran in NOTHING BUT HOPE AND PASSION. 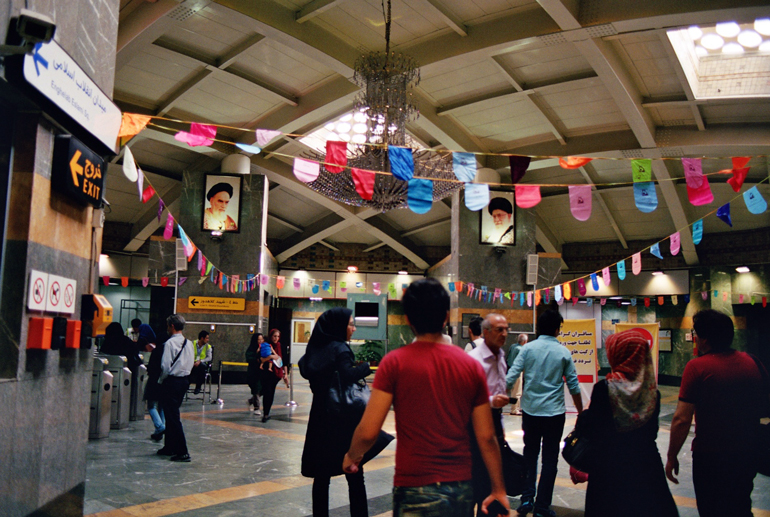 We highly recomend you to listen to one of ATA EBTEKAR‘s last project under his nickname Sote (one he used in the two thousands to release music through Warp Records), titled architectonic. Call it braindance, IDM, or whatever you like, it’s highly probable you won’t like. But we do, and we’re amazed by that level of sound-design craftmanship.

Dariush Dolat-Shahi is another iranian classical/electronic maestro. His album Electronic Music, Tar and Sehtar is one of iranian electronic music foundation stone, released in 1985. The interest from iranian composers from electronic music is really ancient, as it is known that the last Shah who crumbled during the 1979 islamist revolution was really keen on avant-garde. The whole album is quite easily accessible for an avant-garde piece, and definetely worth listenning.

Tegh is a young ambient prodige from Tehran suburbs. We nearly met but our schedule was too tight. One of my best souvenirs in Tehran is walking in the streets at night during hours, listening to his music.

Let’s finish with something more accessible, with Gougoosh, the most famous persian diva (see her as the iranian Nina Simone, in some ways). Her trajectory is quite fascinating as she is a singer from before the revolution but stayed in Iran for 20 years despite being forbidden to perform (women singers are forbidden in Iran). 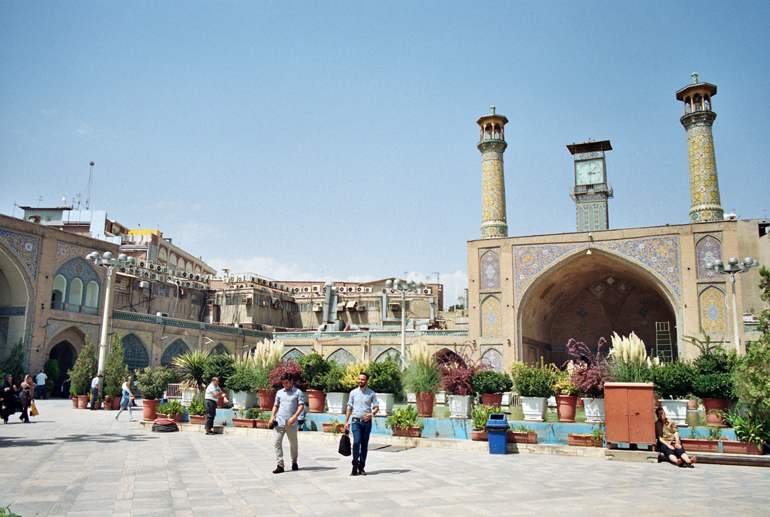 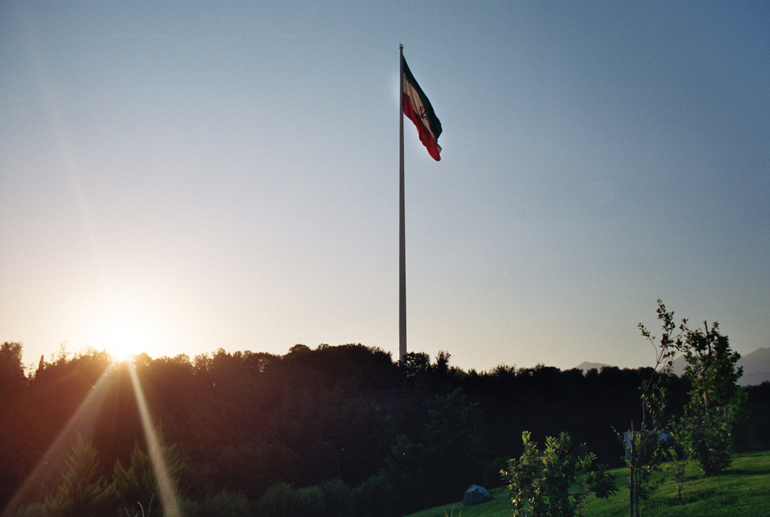 All pictures from this report are from Bastien Perroy.