Manchester vs. Santiago: The youth, the clubs and the countercultures 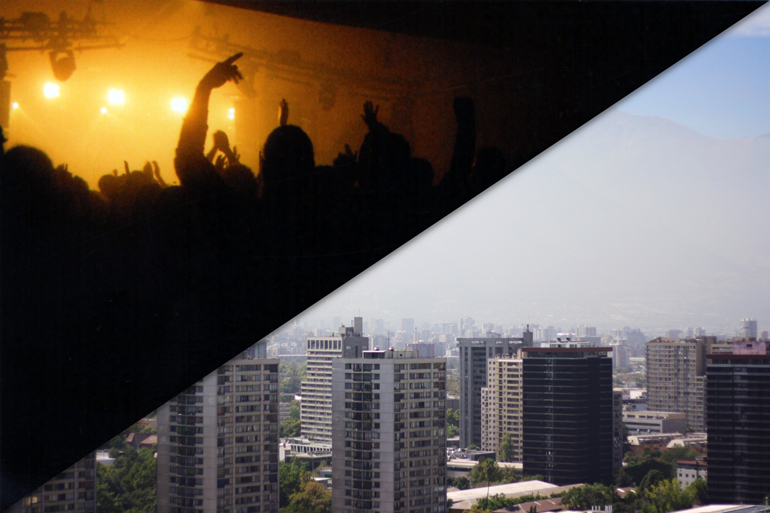 My own pictures of Manchester’s Warehouse Project (up-left) and a view on the city of Santiago du Chile (bottom-right).

When you travel during a certain amount of time, you always end up asking yourself what’s the link between all this. You start making assumptions and having opinions on everything, even if you see the reality of the places you’ve been through a prism. A shoddy prism, and many times discourteous to local cultures that’s for sure. But It only depends on you to try having a less-false and less-fantasized vision on things. It won’t ever be perfect, and sometimes fantasizing things can be great to make things look better – in that sense it only matters that we are satisfied by seeing colourful stories in our minds. Nonetheless, trying it hard to approach things with a less exotic sight can also be satisfying and rewarding in many senses.

It’s a jolly speech but don’t worry, I have a hard time to apply these things to myself – we all have. Now that it is said, let’s try to link two very different cities to see how they constructed their youth, their relationship to drugs and countercultures and how it shaped the way they live. Santiago and Manchester – let’s say the gran gran Manchester, including Sheffield and Leeds – are two interesting areas because their current situation has been built from a similar temporal structure. Both cities had a shifting point in the early eighties, when their youth were reborn with a protesting spirit. It’s where our story begin.

The soundtrack of this period is constituted by La Voz De Los 80’s from LOS PRISONIEROS in our Chilean side and Kino from CABARET VOLTAIRE in our British side. Both represent their years, both represent the struggle against the powers in place. When CABARET VOLTAIRE says ‘Everything. Devoured. I learn to hold my, will power.’ in James Brown, it can refers to the rude liberal shift with Thatcher arriving to office. Sheffield – and Manchester – were the two main industrial hearts of the UK. Both were ravaged, though Manchester embraced the need for renewal quicker than Sheffield. It’s from these places and from this time that ones of the most influential industrial and punk musical movements were born.

And It’s something you still sense when you go to Sheffield. I had the chance to meet LO SHEA, the current main electronic curator of the city. He told me how important was Cabaret Voltaire for this generation:

‘All this industrial sound was started by them, and it reflected the geography and the landscapes of the culture here. That bleak harshness and the steel works, you can find it in their music.’

On its side, Manchester went deep into the Madchester phenomena, the bright years of Factory Records and the famous Hacienda. Counter-culture in its most perfect representation.

Chile on its side was in the middle of the Pinochet years. The early 80’s saw popular bands taking over the voice for contestation. LOS PRISONIEROS, one of the Chilean rock legend, was one of them. They’re a very interesting figure, as frontleader Jorge Gonzalez will also be one of the first person to bring electronic music to Chilean pop music later on. His Cumbia Triste inspired the current electronic generation of Santiago. In general, the politics of Chile has always been influenced by its musical movements. As far back as fifty years ago, songwriters like Victor Jara were ambassadors for the leftish revolution of Allende, just before Pinochet. In this sense, both England and Chile are two places that work in a same way when it comes to relating music and politics. And within that, Manchester was a musical place for contest as much as Santiago was, in a slightly different context.

Jumping up until now, it’s interesting to see how it’s related with how each youth behave nowadays. Let’s face it: the mancunian youth is the one of Europe most degenerate one, having the highest rate of mothers before twenty, the highest drug consumption rate, and they’re also heavy when it comes to bringe drinking. I’ve seen it by myself, with parties in warehouses like Leeds Canal Mills with as much as 2/3rd of the 2000 people capacity clearly on MDMA. And if you want over proofs than physical impressions, you can also read the 2015 European Drug Report made by the European Monitoring Centre for Drugs and Drug Addiction. It pretty much says the same thing.

All that to say that the spirit of liberty and contestation in a conservatism-oriented Britain is something you can still sense in Manchester, in the way people behave and react to things. The rave culture has totally vanished over there – you won’t find many illegal parties – but inside warehouses it feels something similar. We lack the adventure and in some regards it can be considered over-sanitized – Manchester’s Warehouse Project is a good example of that – but truly people that go into these raves don’t go there to get laid or to show their cool clothes to everyone.

These people come to raves to take a hell too-much ecstasy and enjoy good music, basically like 8 years old children playing in sandboxes.

Even the douchebag next to you in lectures at university will go to some of these party. It’s there one of the most interesting fact to note: you don’t have to be cultivated to enjoy good music, and that’s something unique to Britain that makes it for their relative western musical domination over the past 50 years.

A serie of pictures I made with disposable cameras during my various warehouses adventures in Manchester, Leeds and Sheffield in late 2015. Because we were a french group of friends we were having molten camembert and french ‘charcuteries’ after the raves (last picture) but before having to drive two hours to get back home at Newcastle.

When you go to latin America, you instantly feel a different philosophy to music. Their way to approach it is much more focused on the idea of communication. Their narrative arc isn’t much about climax, it’s about groove. In musical terms, it has repercussions on how their soundscape is more aerial, how their rythm are more dancy. In the way they live it, let’s say that it’s just more caliente. Everyone is dancing, and the crowds enjoy open-air concerts where you’ve got room to dance. Of course there’s also something about drugs, in particular marijuana that is being smoke pure over there; but drugs are consumed in a way less frenetic way than in Britain.

Santiago in particular, because of its openness to western influences and because countercultures have been so big, is a very gay-friendly place. A lot of the club culture is about assuming who you’re and pushing forward freedom against the rules. The same way Manchester did in the eighties and nineties. I had the chance to see ALEJANDRO PAZ go literraly amok on its Vayanse song in the Loreto, one of Santiago’s most popular downtown club. Everyone was jumping while ALEJANDRO threw his guts up in its microphone. His music is about politics, it’s about using the punk codes to show that you can use minimal and cheap instruments to share the idea that the people can have the power. When I met the man, he told me that ‘Chile is a violent country, and many times this violence is hidden. Our economy, with some african countries and Bolivia, is amongst the most inegalitarian in the world‘.

Counter-cultures as a response to crisis

It feels like it’s often from the harsh environments in the harsh times that interesting culture emerges. Because it is used to transmit a message, because it’s authentic, it’s less about consumption and more as a communicative medium. It is both glorified and sacralized, and it tells stories about places and people. It becomes something that you can use as a way to bring revendication, as a way to create an identity for your community. Taking a step-back, I will conclude my story with this idea: isn’t it what’s lacking to us, to Europe, right now ? We are in harsh times, but no counterculture has emerged out of the recent years. We lack ways to identify ourselves as Europeans. We need to invent new ways to create the cultural ciment that will create a true popular European Union. Culture isn’t a luxury that should be the first thing to be cut when period of crisis, It’s in fact the most important thing to catalyse. But because we’re nothing but hope and passion, we prefer seeing the coming years as an optimistic period of reinvention for Europe and its identity.