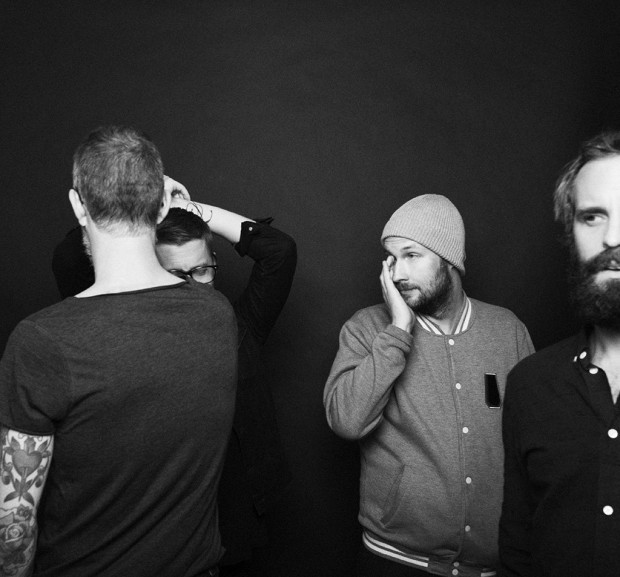 TIGER LOU are back! And if you know us from NOTHING BUT HOPE AND PASSION you can imagine how nice it is to finally read these words. And it makes us even happier to premiere Homecoming #2, the first musical sign of life by the Swedish band in six long years. The new song arrives ten years after the praised debut LP Is My Head Still On? and six years after the group’s third and final longplayer A Partial Print. Back in 2009 the musicians around songwriter Rasmus Kellerman went on an indefinite hiatus to focus on other projects; whether it was new music of simply raising a family.

Still, the guys remained in contact and last year TIGER LOU started playing together and decided – after two praised comeback shows in their home country – to return to the studio and produce brand new music. Although it looks like we still have to wait a bit longer for a new full-length longplayer we’re quite happy about that one song anyway. In the wake of the new song we also asked band leader Rasmus Kellerman a few questions on the new material and the forthcoming plans of the four-piece as well.

Tell us a bit about the story of ‘Homecoming #2’.
A lot of the new songs I’ve been writing, and recording for the upcoming album, are about a character returning to his or her home town. Short stories about what happened before the move, during the time away, and upon the return. Some people might interpret it as an analogy of my own life, using the life of this character as a metaphor for TIGER LOU. Some people might not be millions miles off. Or perhaps it’s about a friend of mine. A friend of a friend.

‘Tell my friends I’m coming home’ … in our interview with you one year ago it already seemed a bit like you and the rest of the band finally came to the realization that you need each other, that you needed all the detours of the past years to realize that. Is the new track your statement of saying ‘I’m arrived. This is where I want to be?’
In a lot of ways, sure. But spending time apart, trying out new and exciting things, was awesome. I really gave it my all, trying to make different music, with different people, in different ways and with different atmospheres. But nothing ever felt as good. Nothing ever sounded as good. Nothing came close, man. We played a show at a friends party summer of last year and before that we hadn’t played together for four years. Four years! But when we met and rehearsed pretty much all the songs sounded magical from the get-go. We’re so attuned to each other, after having played a million shows. So we said ‘Why the fuck haven’t we played for four years?’ And here we are.

What can we expect from the first TIGER LOU album in almost seven years? Any details? Did it become a ‘happy’ album or can we expect the familiar darkness as well?
I think Homecoming #2 is a very happy song, mood-wise and word-wise. There are more songs like that, but there is a darkness in me that never gives up. Melancholy in every pore I guess. My theory is that in the year 1990, when I was 10 years old, my siblings introduced me to DEPECHE MODE‘s Violator, THE CURE‘s Disintegration and Twin Peaks started airing on tv. Those things shaped me into the bitter sweet cat that I am. I would sum up the new album like this: Nothing has ever sounded more like TIGER LOU. It’s the essence of my musicality.

This might just mark the start of a new era for you. What can we expect from you in the future?
We’re taking things slow. Me and my wife have two kids, and I work full time. Mathias has a kid, and him, Erik and Pontus are all working full time. So our music is now a passion project. Whenever there’s free time at hand, something will happen. We’ve been recording songs for almost a year, and so far the album isn’t ready. We’ll play some shows during next year, release a new single or two. It’s not important how and when things happen anymore. As long as they do. Carving out time in our busy lives, to forget about our everyday chores, writing, recording and performing music for the sheer joy of doing it. And having that music, ending up in other people’s lives. That’s all that matters now. For TIGER LOU.