Introducing: Cancer – ‘We Stumble Around In The Dark’ 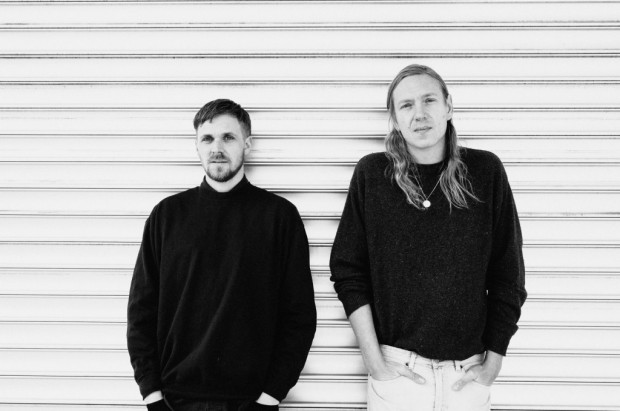 Danish duo CANCER is made up of Nikolaj Manuel Vonsild and Kristian Finne Kristensen. You’ll probably recognize Nikolaj – he’s the frontman of electro-pop group WHEN SAINTS GO MACHINE, and his beautiful vocals have made their way onto this new project of his. Kristian’s also got his own solo project and works under the name CHORUS GRANT. The two met during their bachelor degree and have been making music together since, resulting in their first album Ragazzi earlier this year. Their sound provokes thought and delights the senses; it’s raw, melodic and almost painfully delicate. The two Danes will be gracing the German capital next Thursday as part of the JA JA JA event, hosted by NBHAP. We met with Kristian to talk about their formation, their influences and the reason behind the choice of their moniker.

Hey you two. So we know Nikolaj you’re from WHEN SAINTS GO MACHINE and Kristian you’re in CHORUS GRANT but how did you two meet? How did this new project between you come about?
Our friendship and the project started while we were studying our bachelor degrees and we started hanging out just to play some music and it felt really liberating making something new together, so we thought we’d keep it up by forming a band.

How does the project differ – creatively and practically – from your usual projects?
We’re quite different as people and in our backgrounds so we feed of each other’s inspirations and abilities and it becomes something we haven’t done before in either constellation, which is really fulfilling. Basically we’re trying to do something other than what we’re used to. The whole concept of being two ‘band leaders’ and writers is creatively and practically different from our other works. It’s exciting starting creative work on something new and uplifting to see that idea blossom from the care and attention that we both give it while working on it together or apart. Metaphorically spoken, we stumble around in the dark looking for the perfect common denominator in each song.

What are your musical influences?
On a broad scale its eighties and nineties ballads, soft rock, a tiny bit of funk. We don’t always share the same taste in music- but then there’s some stuff that we’re both into- things we listen to when we’re together just hanging out. We both grew up in the nineties and the sound and a vibe to music from that era we both like. We generally just love music and listen to everything that’s out there.

What’s the creative process like between you both?
We have a pretty good understanding of each other’s musicality and trust each other’s strengths artistically. We don’t have any rules about who does what on our tracks. It’s a very natural process and something that happens in the writing process when we sit face to face.

I read that you called yourself CANCER to be able to talk about things that are sometimes painful or difficult. My family lost a member to cancer last year, and it got me thinking about how the Western World deals with death. In some ways, especially due to the Internet, our lives are more open than ever, but in other ways, we’re not talking about things that are important. Where do you think things are heading for the current generation?
That’s a though question and we wouldn’t pretend to know where things are heading for our generation at all. We feel for your personal loss and also think that once you’ve lost someone that close to you, you enter a new perspective hopefully you will arrive at a place of some kind of peace or balance. In a general sense we try to embrace sadness, sorrow as much as successes and joy.

Let’s talk about the emerging music scene in Scandinavia – what do you think they’re bringing to the table that distinguishes from the US or UK market?
It’s an exciting time for us as musicians because we’re doing something that we enjoy. There are lots of good bands around in Denmark and in Scandinavia but we don’t feel like we’re part of a Scandinavian or Nordic ‘scene’ as such – not musically anyway. I don’t know if there’s a specific thing that distinguishes Scandinavian music on ‘foreign’ markets. We like to think that we’re just a band and not something particularly Scandinavian or Danish.

What can we expect at the Berlin Fluxbau event? What’s your set up?
We’re a four-piece band when playing live with drums, bass, samples, effects, guitar and vocals. We hope to find a connection between us on stage and the audience and look forward to playing for the first time in Berlin and we’re excited to play.

If your music were a film, what film would it be?
Uh – don’t know…a cross over between Inland Empire and When Harry Met Sally perhaps?

How would you describe your sound to a deaf person?
Being tickled with one hand and pinched by the other.