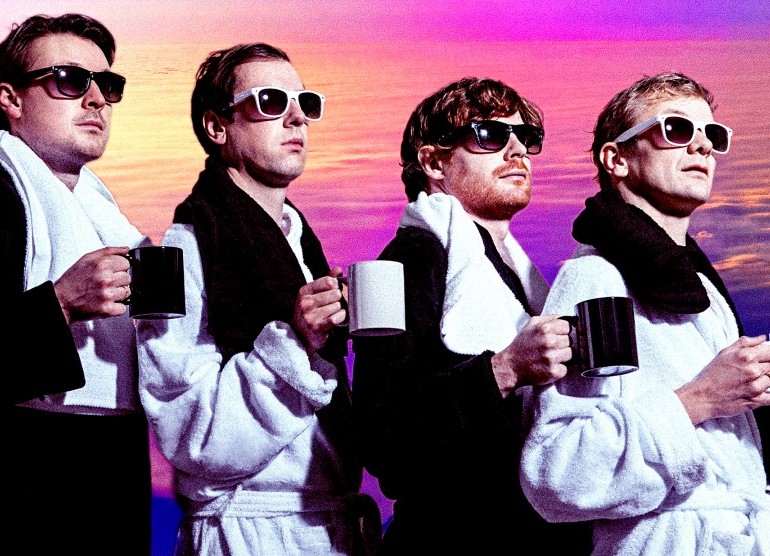 It’s fair to say that  DJANGO DJANGO have dragged us all onto the dancefloor at some point in their career so far. Actually, we rushed there voluntarily. The energy and enthusiasm of their recordings is more than doubled when it comes to their live shows. Being on tour with their second album Born Under Saturn, the British band sat down with us before their return to the stage in Berlin. Squeezed onto a couch in the back room at a local radio station, NOTHING BUT HOPE AND PASSION met bassist Jimmy Dixon and keyboarder Tommy Grace for a chat about tour life, their much-loved Aussie colleagues TAME IMPALA and the perils of recording in big studios.

Coming straight from Munich where traditions play a pretty big role, do you have any traditions in your lives?

Tommy Grace: I think I’m quite traditional in general. I like things being done in a certain way and things being in their place. Dave is the opposite of me. He’s quite volatile.

JD: His stuff is just everywhere. Within twenty minutes of being on the tour bus, it looks like a teenager’s bedroom. There are socks everywhere and cups with moldy tea bags in them.

TG: It’s like when a cat moves into a new territory and just pisses everywhere.

What do you do against this kind of bad behaviour?

JD: We try and push him into one area of the bus and lock the door quickly. Luckily, someone is there to tidy up after us on the bus.

TG: We’ve been touring for a while and we’re very happy we’ve got a good crew around us. As long as you have that, everything’s much easier and definitely less stressful. It wasn’t that long ago that we were driving ourselves around. It’s much more difficult to do that and play a show in the evening.

JD: I used to like it,  but then again I wasn’t the one driving so I spent most time giggling in the van having fun.

TG: You were sticking your fingers in our ears! I must say I really like driving at night, though. I think it’s the best. It’s great to listen to some music and to drive through cities seeing all these lights. Listening to KRAFTWERK is so good in this moment.

This reminds me of the TAME IMPALA‘s Bedtime Mix that was on BBC Radio 1 recently. KRAFTWERK was on their playlist too.

TG: Yes! We’ve been playing lot’s of shows where we shared the same stage with TAME IMPALA at festivals. They’re a really good band and Kevin Parker’s got some really interesting stuff to say which I quite like. He recently talked about being at a stage in his career where he’s finally able to write and play the kind of music he’d actually buy in a shop himself. I thought it was a nice way of thinking about this aspect of music.

Have you ever thought about your music in this particular way too?

TG: Maybe we’ll think about it in this way from now on. Sometimes, you can get a bit confused when it really should be as simple as what Kevin Parker said. You should just be trying to satisfy yourself and try not to be distracted. By the way, I’ve got this great photo of TAME IMPALA and their crew sitting at a long, white table backstage at a festival we were playing. Kevin Parker sits right there in the middle and it was just like The Last Supper!

JD: He’s obviously so engaged with what he’s doing with his music which is great. Even live on stage he’s very much involved in the little details. He’s an incredibly talented guy. It’s been really good seeing him playing with Tame Impala over the summer.

Before you kicked off your tour, you spent some time in the studio shaping your new album Born Under Saturn. In how far did the approach of recording in a bigger studio help the album?

TG: It’s true, we started working on the new songs in a big studio so it was new for us in a way. We were a real group and there were four of us in the studio from the start. That was different from our first album where it was only Dave and Vincent. We spent like two or three weeks working with a producer, but when we listened to our ideas back home afterwards it just didn’t seem right.

JD: It just didn’t sound like us and also a bit too polished. You could tell that we’d been recording in a big studio. Everything was too perfect, I guess. The nice thing about the first record is that there are little malfunctions and the roughness of it in general. It gives an album a special dynamic. When you listen to 60s records, you can hear why there’s a certain instrument in the room whereas when you’re in a big studio, everything is so perfect all the time. You don’t necessarily get a sense of where an instrument is. 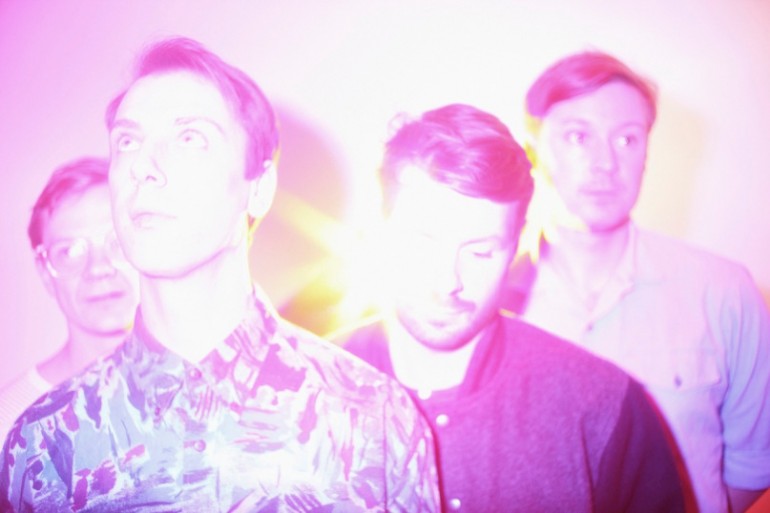 What did you do about it, eventually?

JD: When we were back home, we realized that there wasn’t really a soul in what we had recorded, even though it sounded perfect. That’s when we decided to take the recordings back to our own little studio in London where Dave kind of pulled them apart. Going through the recording process of this album, we were worried that we didn’t know the rules and we were doing things in the wrong way.

TG: I think it’s important that you have faith in your own amateurism. You should never just trust the professionals. The result might not be better, but maybe more appropriate to yourself.

JD: It’s almost like when you’re a kid and you buy yourself a set of water colours. You start painting until you realize what you’re doing is awful so you get some poster paint instead.

TG: As soon as you got the fancy materials and paper, you become really self-aware and don’t want to fuck up. Eventually, you draw something that is not really you. Whereas if you get some cheap paper, you feel more free and do something much better.

So you’re already planning on piling up cheap paper when you return home from tour?

JD: I think so. At the moment, we’re all very keen to start writing new material as soon as we can and we want to move on.

TG: It would be good to get back in the studio as quickly as possible. When we made the last album, we had more than enough songs and had to tell ourselves to stop at some point. Now, we would happy to pick up where we left off.

What does it take for you to as individuals to be in the recording spirit again after so many months on the road?

TG: In order to do this, you need to get off the tour mentality. When I come back from a tour, it always takes me a while to settle back into the domestic environment.

JD: For a while, we thought we would have a lot of song ideas before we went into the studio after two and a half years of touring with the first album. When we actually sat down and listened to all of them, we realized, we had nothing so we had to start from scratch. It took a good few weeks for us to get used to each other’s decision making too.

TG: At the end of making this new album, we were all just brutally honest with each other. You learn not to take things personally.

‘In order for the songs to become better, you have to relax, let go and just embrace the hive mind.’

Has songwriting become something so collaborative for you that it only happens together as a group?

TG: Well, coming from an art background and making artwork in a studio on my own is nice, but it’s much better to work together in a group like this one. It’s a more enjoyable and positive process this way…when it’s working well of course!

JD: I find it very difficult to sit at home by myself and write. Once you get a breakthrough it’s fine, but this way I’m much more critical because it’s my idea. When you work in a group of people looking at an idea, you feel a little less pressure, I guess.

TG: When I’m working with the rest of the band, I’m always asking myself if this is appropriate for Django Django. Whereas when I’m working on my own, I just play what I have and there are no moments like that. People probably wouldn’t listen to all this weird personal stuff that I do. That’s just fine…

JD: I feel like we’re in a counselling session! (laughs)

TG: I just want to say that if you want to make pop music, you can’t be too self-indulgent.