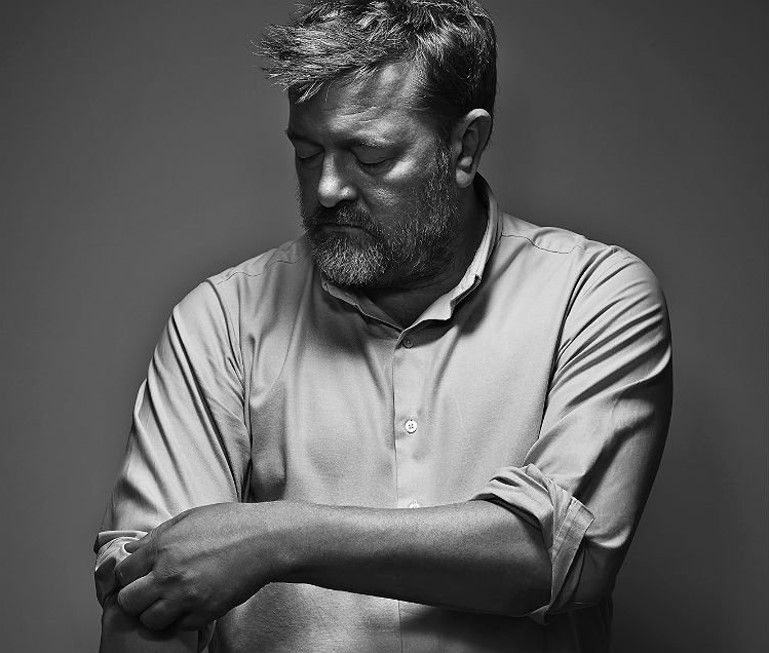 Whisky! The choice somehow was an obvious one when GUY GARVEY offered me a drink of my choice out of his wardrobe stash. ‘I somehow always imagined myself drinking Whisky with you when we meet’ I explain my choice while the big bearded Mancunian answers with friendly smile: ‘Yeah, I get that a lot’. It’s two hours before GARVEY‘s first ever solo performance at Berlin’s Postbahnhof. The original debut gig in Brussels had to be cancelled due to a terrorist threat. After twenty years of composing and performing music with ELBOW the musician just released Courting The Squall, his first ever solo album.

This also brings a few changes in the touring habits since his band usually performs in big arenas in his home country. ‘I really missed this smaller sized touring experience,’ he explains as we sit down. ‘You know, a big group in a small bus, on the road during the winter time.’ He laughs, takes a sip of his glass and adds: ‘You cuddle up and it’s cozy.’ The comparison might be a bid odd but if you meet GUY GARVEY in person he really is a sweet and humble bear, disguised as a gentleman; a polite talk partner that is happy to hear your thoughts on certain things. Although only being 41-years old he got something of an elder statesman when it comes to British music. Coming up during the same time as COLDPLAY his band might have never gotten as big as their fellow countrymen but ELBOW managed to be loved by fans and critics in the same amount while slowly building up a loyal fan base all over the world. Still, he has nothing bad to say about COLDPLAY and stated that they were really supportive to his main band from very early on. ‘Chris Martin used to say that they supported us’, he explains, ‘but I might not really be sure about that’. He adds with a smile ‘Maybe they were just being kind.’ Chris Martin once said that Grace und Pressure off ELBOW‘s 2003 LP Cast Of Thousands later inspired COLDPLAY‘s infamous Fix You. Both groups still share the same lawyer anyway.

Both bands couldn’t be further way from each other although they love to perform big anthems in front of a huge crowd. ELBOW never aimed for a big pop hit, they’ve always been a bit odd, edgy and – let’s say – sleazier. GUY GARVEY is the Anti Chris-Martin, a wise lyricist and polite gentleman who stayed in his hometown and never aimed for Hollywood stardom. He’s the sort of British lad you could easily meet in a Pub around the corner which brings us right back to the Whisky topic from earlier. GARVEY makes an exception for me since he’s not drinking that much anymore these days. Turning 40 last year marked a change in the life of the songwriter as the longtime relationship with his girlfriend ended. ELBOW‘s The Take Off And Landing Of Everything from 2014 reflects a bit on this but Courting The Squall gets a bit further. Still, GARVEY remains an optimist after all. Asking how he feels about his solo debut show he answers: ‘It’s a healthy amount of nervous’ with the usual smile.

How different does this whole solo thing feel compared to ELBOW?

Guy Garvey: It’s been 20 years since I played a show with completely new material. In the past there’s always been one familiar track in the setlist when I played with ELBOW but this time there isn’t. It feels like a fresh start. Still, I got the same crew my band uses, the same brass section.

Any specific criteria how you picked the band members for this adventure?

GG: The guitarist is my best friend, Peter Jobson from I AM KLOOT. The bass player is Nathan Sudders who’s also a good friend. I know him for a few years and he’s also dating a girl I know for twenty years, so there’s this connection. There were no second thoughts when it came to the brass section. I love these girls, they are like sisters. And Alex who plays the drums is just a fucking brilliant drummer I was lucky to get hold of. They are great people who are really good at what they’re doing. So yeah, I picked the setting, I picked the studio and I picked the personal

What’s the history of those songs? Are they of more recent nature or did you try to approach them to your band for years?

GG: They just came in the studio more recently. For example, the vocals and melodies to Juggernaut happened two days before we were due to master the album. I wasn’t happy with the lyrics and the melody of the first version and I rewrote them all right before that deadline. And now it’s actually my favourite of the album. It just happens as it happens, I guess. Some of the images I use are years old. When it says in that track ‘Proper hopper in the hurry home gloom / As the tail lights spidered through…’ that’s a cafe window in the winter and ‘Propper Hopper’ refers to the painter Edward Hopper who always did these night scenes where he looked through certain windows. And I was looking for something that rhymes with ‘propper’ when I was trying to describe that cafe in Manchester. Perfect fit. On the other hand I had that phrase ‘the tail lights spidered through’ in my head for ten to fifteen years. 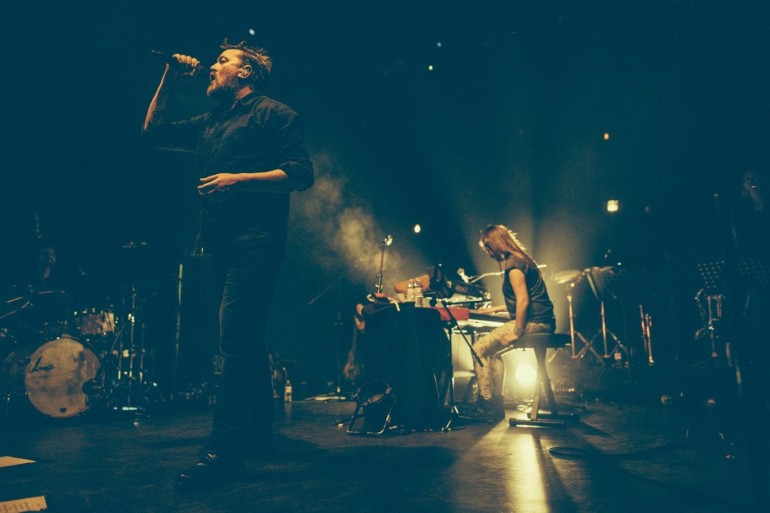 Courting The Squall gives the slightly odd ‘bar singer’ character in GUY GARVEY the long overdue limelight as it delivers dark and haunting little pop gems. Although it’s not an upbeat record it was important for the protagonist to have really a really strong groove as the foundation for every track. Vitamin C by Krautrockers CAN inspired the jazzy Belly Of The Whale, for example. GARVEY praises the ‘Mad Men vibe’ (the TV series) of the track and his ‘almost KRUDER & DORFMEISTER-like drums’ as he puts it. He had a clear vision of where to go with this album although it was less forced that you might think. Just take the story of the reference to the GEORGE MICHAEL-Careless Whisper-saxophone solo in Belly Of The Whale which he explains to me in the following words:

‘The song is about my home and after my long term relationship ended I was left in this huge house. And Careless Whisper is such a saaaaad song… ‘I never gonna dance again’… Come on, man. It’s ridiculous. The track is making fun of that period of moaning. I didn’t have something to happen in this section while we were recording and I just shouted down the talk back microphone: ‘Do Careless Whisper!’ It ended up being so hilarious that we just kept it that way.’

The album clearly is about having a good time but it also showcases once again what a clever and intelligent songwriter the man from Manchester is. He’s a member of the British Academy of Songwriters, Composers and Authors (BASCA), winner of the Mercury Prize and even wrote a song for the London Olympics back in 2012. The stakes are high for him with every release, it seems. Still, he doesn’t feel a lot of pressure as he explains: ‘You know when you let yourself down and you can feel when it’s not good enough. 25 years into doing this has taught me what I like about it and what my favourite parts are.’

Now that you’re playing in front of huge crowds does it change your way of songwriting? Do you automatically think in ‘anthems’ or have the masses in your mind?

GG: I tell you what it is: when you see 30.000 people singing your songs and you were watching them it’s massive. I remember seeing U2 play for the first time. By now I know these guys ’cause we toured with them but I haven’t talked with them back then. I wasn’t a big fan back although I owned a few records but a friend of mine had a ticket over so I joined him. And then I saw the crowd singing In The Name Of Love and I was in tears. It was a unification of the whole audience. Once you’ve seen that it becomes addictive.

Guy Garvey: ‘Elbow return to the studio in January 2016’

Yeah, but it could result in those forced mass appeal like COLDPLAY’s new album which way overdid this whole ‘Ohohoho’ thing…

GG: I agree, still I can understand why Chris Martin wants to put all those positive anthems together besides having financial benefits from it. It’s a role a few bands have to fill and COLDPLAY are really good at it and they are also very kind people. They’ve always been very good to us, you know.

You’re also a radio DJ at BBC Music 6, having a regular show there. Does that job keep you vital when it comes to new music?

GG: Yeah, definitely. A lot of things get recommended by my audience as well. I remember saying on my radio show ‘I really like a couple of Elvis Costello songs but I don’t know where to start when I want to know more about him’, so my listeners sent in suggestions and stories to Elvis’ songs and now I am suck on his music. And it’s the same with Afrobeat. I don’t know that much about it but now I somehow became a strong force for the genre and Afrobeat labels send me their releases. I play all sorts of genres and because I’m spoon-fed it keeps me fresh.

We should hire you as our NOTHING BUT HOPE AND PASSION mascot since you really represent those two elements with enthusiasm, it seems…

GG: (laughs) Thanks for the offer. It’s true, music is something that I rely on heavily. There’s always a reason why I’m singing these songs. Passion is important to keep parts of you breathing – it’s essential. I come to realize that there are parts of the job, like being in the studio with people I love, that I really love. We’re getting to the studio with ELBOW in January 2016 and I seriously can’t wait for it. This solo album has been nothing but fun from start to finish. And that’s what this solo performance is also about.

Can you imagine doing this for another – let’s say – 25 years?

GG: I mean, this is all I know – making music and broadcasting. I’ll make radio as long as anybody wants me to do it and I’ll always help musicians to get their career started. It’s a great life to have although the whole industry has changed. The fact that I can still live from it is amazing to me.