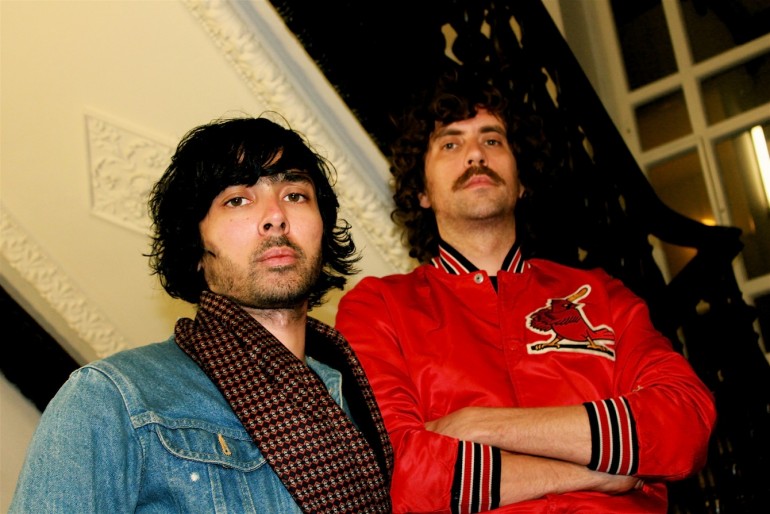 From the outside, it might look like a regular get-together around tea-time. The warm welcome the three men share when they greet each other is immediately followed by a few light jokes. They sink into the leather sofas, the croissants and biscuits on the table in front of them are left untouched. It’s not what they came for. They are here to talk. As French electro-duo JUSTICE, Xavier de Rosnay and Gaspard Augé have filled all possible kinds of dancefloors with their two previous albums worldwide. All while German Techno-DJ and producer Alex Ridha repeatedly draws large crowds as BOYS NOIZE around the globe, too.

Woman, JUSTICE‘s third album, is only a few more sleeps away and they are in town for a special DJ gig. BOYS NOIZE just returned from a tour in North America when they all happily meet in Berlin. Having known each other for almost a decade now, the reunion is accompanied with lot’s of mutual respect. For NOTHING BUT HOPE AND PASSION, the three gentlemen collectively reflect on their long friendship, their work and the beautiful feeling of buying new equipment before making an album.

They all remember very well how they first started sharing ideas and so it doesn’t take very long for a bit of sweet nostalgia to fill the room. Back in the day, the two acts each did remixes of each other’s songs and shared a mutual vibe from the very beginning. A connection that hasn’t lost its power over many years as it seems.

Looking back, with what kind of intention did you work on each other’s tracks?

Xavier: We don’t really make club music so it was a chance for us get played by DJs in clubs. We are not in contact with that kind of scene.There are so many rules about it that we don’t understand in terms of how you build a DJ friendly sound, for example.

Alex: I remember when I did the first remix for you guys, I didn’t like the first version and came up with a more simple idea that I sent to you. Your response was ‘Make it more crazy! Make it more crazy!’. So I think you know a little bit about club music.

Xavier: Well, maybe we can feel what it is all about when we listen to a track, but we still don’t quite know how to make it and turn a song into something that works in clubs. A good club track for us is something with a lot of things happening in there that we can also hear on the computer. It has happened, though, that we heard a track, dismissed it and when we heard someone playing it in a club later, we understood what it was all about and why it works. Back then, we asked Alex to make our song work in clubs. And he did. Afterwards, we owed him a remix. We did something that was completely useless in clubs. Well, it worked, but not on the same level to be honest.

You both emerged around the same time with your debut albums (2007). How would you describe this time in electronic music for you personally?

Alex: For both of us, the music we were doing back then wasn’t really what was going on in the clubs, to be honest. Especially in Berlin, the minimal hype was huge. I always felt a little bit like an outsider with my music in the beginning. When I moved to Berlin, there were techno and punk vibes and everything sounded a bit more rough. There was also electro-clash going on which brought together indie and techno, but it died so quickly as a lot of things do. We kind of met each other through music because what you were making definitely wasn’t played in the clubs either at that time. When I heard your songs for the first time, I played them everywhere and told every record store to check out your label and stuff.

Xavier: They must have listened to you!

Alex: Your music had more of a indie-punk vibe to it and it definitely sounded different to anything else out there. 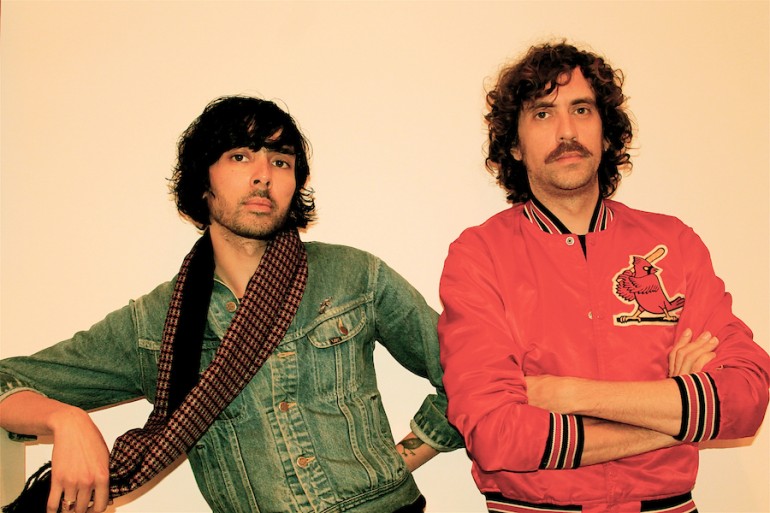 ‘There is someone with a similar vibe or idea’

Apart from remixing each other’s songs. What is your musical bond like these days?

Xavier: We met in Paris three or four months ago when we were finishing the new album because Alex happened to be in town. So he came to our studio and helped us on a track. Nobody knows about this yet, actually.

Alex: Well, I didn’t do very much…

Xavier: It is a track called Heavy Metal. We were working on it while Alex was in Paris and we felt that it wasn’t exactly how we wanted it to be. When we played it to him, he also felt that the song wasn’t quite right yet. It was just like when two rhythmic elements intertwine and respond to each other. Alex put on his white gown and gloves and started tuning everything in our studio. It was great because when you just work on your own, it is easy to lose track of what you are doing. Often, the solution is not very far, but you don’t look into the right direction. Alex did a bit of precision work on the track while we were drinking and eating.

Alex: I did a show in Paris and had some time off so I went to see them while they were in the studio.

Xavier: He didn’t know it was a trap, though! (laughs)

Alex: What happens sometimes is that you don’t know a person that well, but through the music there is some kind of connection. I enjoy that a lot. Somewhere on the other end of the world, there is someone with a similar vibe or idea and then you actually meet each other and it works out.

Xavier: We may only see each other for a short time, but the context can make it quite intense. When you make music together it is a bit like going on holidays together. You only really get to know each other then. This is when you see what people are made of.

The music business can be quite shallow at times. How often does it happen that you build genuine friendships with other artists, for example?

Alex: That’s the beautiful thing about what we are doing as musicians. We get to travel and we make new friends in a lot of places. Obviously, it’s different from the kind of friendship you have with the people where you live. I guess what we have is a musical friendship as well as a personal one. We probably get to spend the most fun part of the day together…the night!

Xavier: It’s cool if you have friends who are musicians, too, who you can be honest with. You don’t have to lie when talking about each other’s music. We only have a few really good friends like that in the music business. Then there are also the people that are fun to hang out with, but you don’t have a long history with each other. It’s not really the music itself that you make, but the intention behind it that makes it difficult to connect with people sometimes. They can be very friendly, but you still can’t connect with them well.

Gaspard: I guess it’s all about integrity.

We have met some really nice people we didn’t keep in touch with because they lost a bit of their integrity on the way.

Xavier: The intention behind what you are doing is important. Of course, you want to talk about your work with other musicians. When your drive isn’t the same as someone else’s it gets difficult.

It’s all about the French touch

Earlier, Alex told me that he really wants to know if you bought any new equipment before making your new album Woman. Did you?

Xavier (to Alex): I can’t believe you are asking us technical questions. You are way more technical than we are!

Alex: When I buy a new instrument, I get so inspired that I always make a bunch of tracks with it. What about you?

Xavier: It’s the same for us. For Woman, we bought like four or five different keyboards and thought that this would be what we wanted to use to make the whole record. There was a harpsichord that we used a lot. We bought it just because it looks beautiful. It’s red and metal and the top is transparent. It looks very retro and futuristic at the same time. We found it in Los Angeles. While touring in 2012, we started looking for equipment like that for our studio. We bought a couple of synthesizers. One of them is like the most expensive synthesizer you can buy. The CS-80 (Yamaha). But we also got one of the cheapest ones called Alpha Juno (Roland). In the end, we only used the CS-80 for five seconds on the whole album and the Alpha Juno is on almost all of the tracks! That’s how it goes sometimes!

Alex: For me as an outsider, there is something like a French sound from the 60s and 70s that I hear in your music. The French synthesizer sound from the 70s sounds different from the one in Germany around the same time. You can just tell. I always get drawn to this French touch that can be found in your songs.

Xavier: It’s true. There was a time where everybody made ‘filter disco’ and it was easy to tell who was French and who wasn’t.

What really appeals to you when it comes to electronic sounds at the moment and what quality do you miss?

Alex: I think there is a lot of good great stuff coming out at the moment. Weirdly, there is a trend of going lo-fi at the moment and there is this reaction to the more commercial sound. They make it sound like it’s on tape or pressed on vinyl. It’s very raw and I love that. For me, it’s not so much about what they’re trying to add to the music emotionally, but it’s more about the sonic world. It only gets annoying when too many people are trying to make the same thing.

Xavier: The thing we have a problem with is music with synths that sounds like Eurodance. I can’t believe it’s still so big!

Alex: Yes, when music forces you to be happy. It’s so weird when it’s all so bright and happy, but it’s missing the depth and soul. Instead, you get the super happy feeling.

Xavier: You always feel a bit ashamed to be in that room full of people who all feel it and you don’t want to give into this feeling.

Woman, the new album by JUSTICE arrives on November 18 via Warner Music. The latest BOYS NOIZE LP Mayday was released back in May. Read our interview feature with him right here.