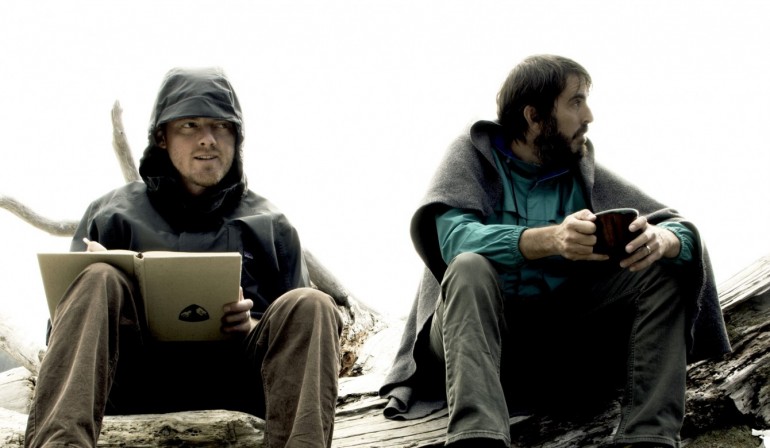 This choice was an obvious one. When we thought about a certain topic to confront post-rock/ambient two-piece INVENTIONS we were thinking pretty quick in cinemascope. The enigmatic and powerful soundscapes of Matthew Robert Cooper (ELUVIUM) and Mark T. Smith (EXPLOSIONS IN THE SKY) are just destined to be combined with big pictures and highly emotional storylines. Besides that, especially Mr. Smith and his main band produced a few really recommendable movie scores in the past years.

The two friends just released their second studio album Maze Of Woods earlier this year which arrived less than a year after their self-titled debut full-length. Productive and crafted – INVENTIONS really remain a fascinating project. And, of course, they also love great movies and movie scores. That’s why NOTHING BUT HOPE AND PASSION confronted the two gentlemen with a few legendary musical moments in movie history and asked for their favourites as well. Find the result right here.

Here’s your music in the trailer for Hellion (2014). Is it weird seeing how others interpret and use your music?

Matthew R. Cooper: I personally love seeing how people choose to interpret our music. It wasn’t a super strange event for me this time around, as I actually created an edit for them to use for this particular trailer. I’ve just always been a fan of film and music put together, and so it is generally pretty fun for me to see how the song goes to live on in another manner or attitude than perhaps it was previously intended or considered when writing it. I don’t know Kat personally, but she seems like a pretty awesome and talented person and I think that makes it exceptionally easy to send music over in support of someone else doing something they love, and watching it become a whole other thing.

Mark T. Smith: It is weird, or to put it in another way, fascinating. I think so many of our songs are tonally ambiguous, and I think different imagery can push the listener/viewer to actually see/hear the song/imagery differently, so I love seeing which ways people go. I have known the director of Hellion, Kat Candler, for a good number of years. EXPLOSIONS did our first two soundtracks for her films (one full-length and one short, circa 2000 or 2001, I think). But I loved that she initially had no idea I was in the band that did the music that went into this trailer for her movie. She only found out later, and it seemed to trip her out. I think we were both pretty thrilled about it. The editing in this trailer is pretty spot-on.

2. The Opening Scene of ‘A Clockwork Orange’

This scene always strikes me as the perfect soundtack moment in a film: the really weird, harsh electronics drip menace and mentally prepare you for what you’re about to see. What do you think of it?

MRC: Such a brilliant pairing of sound and vision. I’m a fan of both the film and the music. I’ve always loved Purcell’s Funeral for the Queen Mary, especially,… and Wendy (née Walter) Carlos’ adaptations are just phenomenal. Though a huge fan of Kubrick, I don’t really know much about how the choices of music in his films came into play, but clearly his films excel far beyond many at the combination.

Do you have any favourite soundtrack moments in films?

MRC: I think the Martinez Solaris score is fantastic, Michael Andrew’s Donnie Darko score is probably my favorite ever. As for specific moments…I probably have too many to be able to pull from… it’s sort of endless really. I could go on forever. Here are a few things I could find to link to.

MTS: Tree of Life is the best movie. This is the first thing that came to my mind. This scene is just… horror. But somehow also more than that. Anyway it is unforgettable, and the music heightens the feelings so much. It’s the harvesting scene from Under the Skin. I also think the score for the sniper scene in Full Metal Jacket is incredible.

And, like many people, my favorite combo of composer and director is Angelo Badalamenti and David Lynch. So many astonishingly rich scenes. This one isn’t even a Badalamenti piece, or even score, haha, but it’s one of my favorite musical scenes in any movie (the Llorando piece from Mulholland Drive):

MRC: Yeah, Badalamenti and Lynch. I could watch fir trees sway in the wind with his music forever.

3. Metropolis – a re-score by GIORGIO MORODER

I find it interesting that Fritz Lang‘s Metropolis (1927) has been rescored so many times; normally people consider something so old and prestigious to be too sacred to reinterpret. What do you think of Moroder’s electronic rework and the idea of using new technology and artistic methods to reinterpret old cultural artifacts? Is there any film you’d love the chance to rescore?

MRC: A few years ago I was asked to choose an old film to rework live for Ballroom Marfa. I chose The Blood of A Poet. I thought it had a good balance of the sweet, the brutal, and the strange to work with. It is interesting that Metropolis seems to always be chosen for this concept, but I think the imagery just lends itself very well to the process. I’m unfamiliar with Moroder’s version.

MTS: That’s a little tricky because most of the good movies have good scores. In EXPLOSIONS IN THE SKY, we’ve always talked about doing a score for No Country for Old Men. The movie’s basically perfect as is, with essentially no music, but it always drew us in as something to contemplate. For INVENTIONS, I don’t know! I would love for us to re-do some underrated sci-fi like Gattaca or Never Let Me Go, or something playful and nostalgic like John Duigan’s movie Flirting.

You mentioned PANDA BEAR as someone you mutually listen to. He put a lot of effort into the visuals for his latest album (Panda Bear Meets The Grim Reaper). What do you think of the video for Boys Latin? It’s a weird mix of abstract visuals and narrative.

MTS: Yeah we are big fans of all he does, and this video is no exception. I love the style, it comes across as trippy but also meaningful. The open-endedness is pretty transfixing, I love how you can kind of sense the characters’ awe and wonder and horror, all at once, and then finding semblance and support in another person.

Finally, your own, really beautiful, video for Springworlds. Could you give us some insight on how this came together and what you wanted to do with it?

MTS: Dan W. Jacobs, the artist that did this video, was recommended to us by Simon Raymonde from Bella Union. All we knew was that we knew we wanted to do something animated and we immediately fell for his style. There was very little directing by us–we just picked out some particular stylistic moments in his past work that felt suited to the song, and asked him to make a story inspired by the song. Dan mostly took it from there, with feedback here and there from us.

Do you think that your music being largely instrumental gives you more freedom with regards to the visuals?

MTS: Yes, I think so. Our music is simply composed of impressions and feelings and tones and internal mysteries, so you can go any which way. That comes with its own challenges of course. There is no subject matter to start from. It’s not like a song is inspired by and has lyrics about war or romance or a childhood event. All you have to go on is the song title and the tone and movement of the music, so it’s up to the artist to translate that into images, and in this case I think Dan really found the feelings of surrender and naturalness and disintegration that we feel from the song.