Interview: J Mascis – ‘It’s weird to have music be so… virtual’ 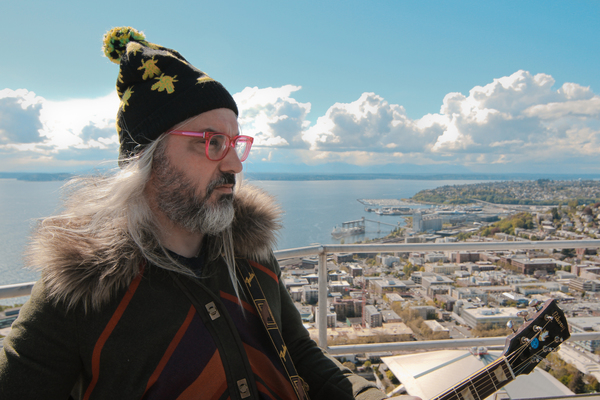 The frontman for DINOSAUR JR, J MASCIS, is a notoriously tough interview.  Tall, brooding, with long, stark white hair that falls practically to his waist, you’re grateful for the glasses he wears in order to have a bit of a barrier from the stare.  Intense and reserved, I end up running into MASCIS prior to the interview at a café across the street.  His gregarious Berliner wife invited me to join them for lunch, and MASCIS’ expression when he heard her invite me did not indicate a warm welcome.  Not one to turn down free food, especially next to an indie anti-hero of my youth, I got to hear about their visits back to Berlin (frequent), where they met (New York) and the son wondering whether I was named after a German children’s television channel (I was not.) Read on for some awkward silences, the spiritual emptiness of digital recordings, and why J MASCIS does not want a regular day job.

[motioning to my recorder] That’s a dedicated device.

Well, I always double up, recording on two devices, but I have had better luck with something that does just one thing, whereas I’ve lost recordings on my phone.
It’s always good to have two. Yeah, I’m always surprised when people just have the iPhone.

Listening to the new album, Tied to a Star, I wanted to talk to you about the first track.
[we begin to play the track ‘Me Again’]
Yeah, people ask and I’m like, ‘What song is that?’

But you set the order, right?
I don’t remember the songs, exactly.

What about the whole album?
[deadpans] No. [laughter]

Do you feel like what you are writing about has changed, as you get older?
I supposed it must. It’s hard for me to say what… I don’t know, it could change day to day.  I just kind of write the song and finish it and don’t think about what it was. Maybe, some time later, something- it will become apparent- some theme, but I don’t really pay attention when it’s happening.

So you don’t set out with a pre-set theme?
Yeah, I just have a kind of an idea, a kind of tone.

What about just switching from being in a band, DINOSAUR JR to other projects, J MASCIS AND THE FOG and then solo? Was there anything better you liked about the process of doing it by yourself versus with a group?
Yeah, usually the Dino process is somewhat painful somehow. We were just, like, trying out. Initially we are trying to wait until the song sinks into the drummer’s head. Takes him a long time – is this thing still working? [picks up phone to see if it’s still recording, this may be a diversionary tactic, I fall for it]

It keeps going until you stop it. Thanks for looking out.  So you guys reunited in 2005 to do a tour, right?
First we did a TV show and one show, and from there we kept going ‘Okay we could do a few shows’ until we were recording an album. And it was like ‘Oh okay we probably want to have some more shows so we should have a new album.’ And it’s just been kind of going like that.

What do you think of all the other bands from the nineties that are reuniting and doing tours? Do you think there is any particular reason for it?
To make money, probably.

Tell me about being on the show ‘Portlandia’ with Fred Armisen. I mean, it’s kind of self-mocking.
Yeah, I was just… it was pretty funny. They had the sketch already before they knew I was going to be on it. A lot of that stuff is just sort of improvised.  But I was just on Seth Meyer’s [Late Night with Seth Meyers] show for a week, playing with Fred, he’s like the bandleader.

That’s what I read about.
But now he’s taken summer off to do Portlandia stuff. I wonder what happens to the band when he’s gone. 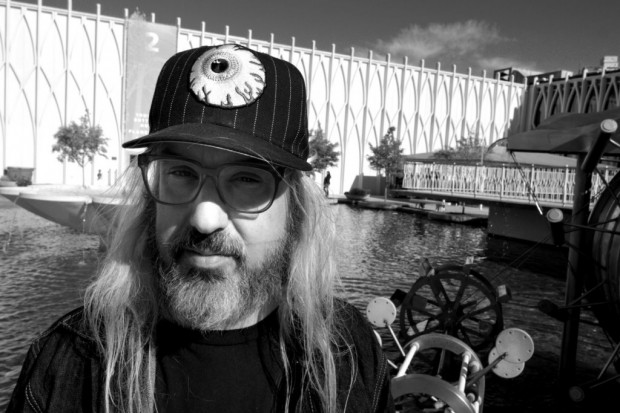 How was that, working on a live show?
It’s all right. It was kind of weird doing it every day. It felt like having a weird job. Like, ‘I have a job, have to get up.’ I didn’t like that feeling, especially. [chuckles] I don’t like TV.

So you’ve seen the music industry change drastically? What are some of the best things and what are some of the worst things about it?
It’s good to see a lot of major labels kind of just disappear and all the stupid people that used to work there who didn’t like music… that’s kind of enjoyable. It’s weird because it seemed like in the sixties and seventies a lot of people who worked at record labels were really music kind of people and then by that time, the nineties, there was some music people and then just weird people who just worked there… it was kind of bizarre in away. Like the guys who would sign you were music people and cool but a lot of people who worked there were just … weird.

You think it’s kind of purified it? Distilled it?
Maybe, yeah.

Is there anything you particularly like about the change, like the digital revolution making it easier to collaborate or easier to put things out there?
Yeah I guess it’s cool that it’s easier to collaborate. It has its ups and downs too, a lot of things just sounds worse, ultimately. It’s kind of depressing how everyone is listening to stuff on phones, like music doesn’t really- can’t really affect you the same way. It’s kind of not as important to people, I guess. One reason it’s not as big of a deal because you can also just spend hours on the Internet doing whatever, wasting lots of time, I think some of that time people used to listen to more music.

You mean, in terms of dedicating their attention to it, as far you used to listen to music and didn’t do anything else, whereas now you put on as sort of background noise?
There’s just so many more distractions when you have a computer you can do anything, watch YouTube, whatever, you know? That’s just weird how you can just listen to ANY song. Like I’m driving in the car, I think of a song and I can just listen to it on YouTube, coming through my speakers in the car, it’s kind of bizarre, that you can just… I don’t know. So, yeah, I can understand NEIL YOUNG freaking out and making his ‘Pono player’ or whatever it is that’s better quality. I notice that with some albums I’ve listened to a million times, like BLACK SABBATH Sabotage. I got a new album of it and I put it on.  I played it, and I was like “What is this? This isn’t…” It wasn’t the same experience. I could tell they must have made it from a CD or a digital copy or something because my whole body knew the album, and it wasn’t affecting my body the same way. It wasn’t the same experience and it was really weird.

Does it flatten the sound or does it just completely rob it of its soul?
I think it’s just a lot less of the sound, you know? I’m not sure exactly what’s happening. My body knew the album, and it didn’t know the record anymore. It was a bizarre feeling. And I had the same thing, I bought this DISCHARGE singles compilation, I think the same label actually that put them both out, that re-released them.

BLACK SABBATH was just here two weeks ago.
I was there.

I was there too. I’m curious, what did you think of the show?
I thought it was awesome, I had never seen them before and I was really impressed with Tony Iommi, I had never really thought of him that much you know? But now he’s risen to the top one of the best guitarist I’ve seen.

I was a little worried, Ozzy can still definitely move around, I was a bit concerned but he definitely still seems to have it.
I saw THE ROLLING STONES two days later.

Was it in the same place?
No, same concept, but a different venue. But they- you’ve got to worry about some of them.  I saw the guitarist drop to his knees while playing and I was like ‘Hope he can get up again.’

What is he strangest thing you’ve gotten from a fan?
A collage of myself.

All of you?
Yeah, just different pictures… that was disturbing.

Why?
Uh, because it was? The note said ‘This is what I wanted to show you.’ It was creepy.

Have you ever had a fan draw some completely out there inference from one of your songs?
Probably, but I can’t remember.

What was breaking up DINOSAUR JR like? [at this point his wife, son, brother in law and PR rep barrel through the room we are in, his son tries to get his dad’s phone to play video games, unsuccessfully]
It was all right at the time, it just seemed like it was time to try something else.

What do ‘hope’ and ‘passion’ mean to you?
I guess it’s kind of the same thing to me, hope and passion. I mean if there’s hope, I guess you could have passion. But it’s just… [trails off]

Do you think they are mutually exclusive? Like you have to have one to have the other?
Yeah, I would say. ‘Cause it’s how we get through the day.

It was funny talking to Gregg [Dulli, of THE AFGHAN WHIGS] last night, we were talking about changes in the music industry, he said ‘any kind of resistance to that, you’re just asking to be put in a box and thrown to the bottom of the ocean.’ Meaning if you can’t adapt to things…
I know, people are bitching about stuff, it’s just like what can you do, it’s just how it is, what are you going to do about it?  I’m just happy people are still making records, you know they’re getting a bit more popular and CDs kind of going away, that doesn’t bother me. Because that’s the way I relate to music mostly, through albums. It’s weird to have music be so… virtual.

J MASCIS solo album ‘Tied to a Star’ will be released August 29 on Subpop.
—