21st Century Uproar: Why the World needs the Sleaford Mods 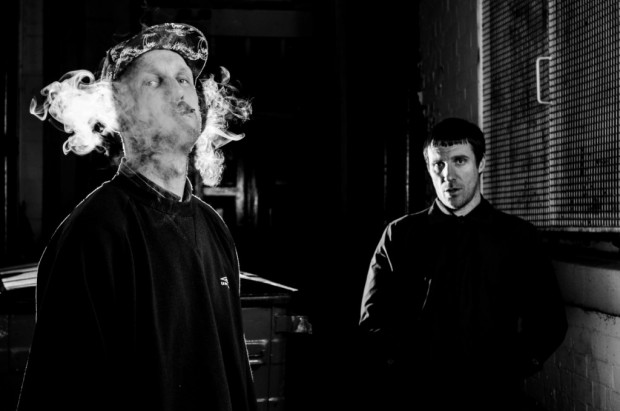 Earlier today the BBC announced the 2015 shortlist of its acclaimed ‘BBC Music Sound Of…’-series with young electropop newcomers YEARS & YEARS on top of it. Well, nothing against these young gentlemen, we don’t know them personal. But, seriously… another hipster-shirt wearing synthesizer-driven sort-of indie-pop band with radio appeal? All these SAM SMITHs, BASTILLEs and however they are named – they might be good performers, solid songwriters and all that stuff. But it is slick and spineless pop music that is currently ruling the market. Tension in our Western society is sensible everywhere at the moment, just take the ‘Charlie Hebdo’ horror from earlier that week – the question remains: when will music culture follow that tension, start the uproar and frees itself from the chains of its own comfort zone?

Every movement starts with a first move, the right sound at the right time. We wouldn’t go that far to classify SLEAFORD MODS as the sound of a potential uprising. But the reception of the praised British duo in the past months shows an undeniable demand for a little controversy. People need an outlet – and Jason Williamson works just fine as a personification of that. He’s not a slick looking 20 year-old Topshop-styled newbie, he’s in his early 40s, and doesn’t look and sound like a pop star. He’s the new face of Britain’s working class and the music of him and his friend Andrew Fearn is the sound of it. The decline of Britain’s traditional working class art is clearly sensible in the past years. NOEL GALLAGHER recently complained about no one following the footsteps of OASIS (something NOTHING BUT HOPE AND PASSION already did a few months earlier). The charts are packed with well educated middle-class pop stars who sing about either love or cryptic nonsense.

Williamson might be everything but his words couldn’t be farer away from being cryptic… ‘I work my dreams off for two bits of ravioli. And a warm bottle of Smirnoff, under a manager that doesn’t have a fuckin’ clue’ he sings in Fizzy. The sound of SLEAFORD MODS is defined by anger, frustration and a general despise of the current situation. Williamson, the band’s lyricist, isn’t all about hate though. ‘I like tons of stuff’ he confesses when NOTHING BUT HOPE AND PASSION got the chance to ask him a few questions. He’s quite relaxed when it comes to all the praising from fans and music critics. ‘It makes you a target for fuckers who want to trip you up’ he explains. Still, as he confesses, being named the saviours of British music is a ‘nice compliment though. Very few bands get that.’

One thing that might help explaining the buzz around you is a far too big demand for artists who just don’t give a fuck, whose lyrics are honest, real and dirty. Would you agree on this?
Jason Williamson: People want good stuff but will settle for half cooked stuff if needs be simply because life takes over. The general population don’t covert creativity in a total sense simply because the rent needs paying and much time is taken up doing that.

Indeed, I get the sense that even the once so glorious ‘indie’ lost itself far too often in self-referential irrelevance.
JW: Yea, of course. Implosion is usually the last chapter.

Are their specific artists that helped to shape your attitude and worked as a role model for you?
JW: For me it was mainly mod, hip hop and UK Punk Rock. Andrew has a more varied underground influence and far more educated in those areas. I didn’t even know who Kim Gordon was until last year.

You as a punk fan – Is the movement really dead and defeated?
JW: No. Indifference to control will never die. 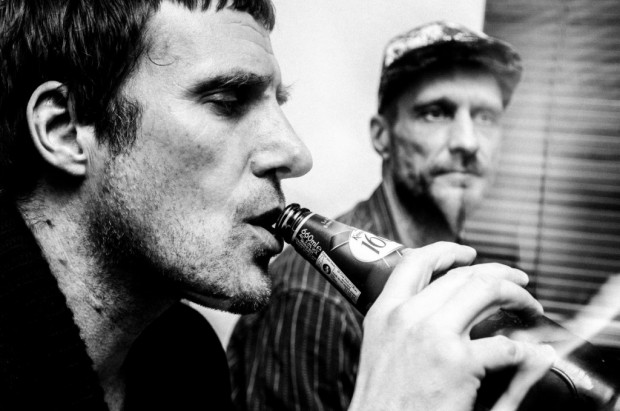 Confidence meets credibility. The sound of SLEAFORD MODS is a reduced form of lo-fi punk. A bit as if Mark E. Smith and the rest of THE FALL recorded the debut album of the STREETS. The duo’s methods are simple. ‘Andrew does the basic track, I do the lyrics,’ Williamson explains. ‘We then get together and form the idea. Sometimes his tracks don’t need fiddling with,’ he continues. Williamson’s lyrics are less based on a traditional verse-chorus-verse-chorus-pop scheme but feel more like a stream of consciousness. It’s just thoughts popping out, thoughts we all have, and thoughts we are often afraid to speak out loud. One of the key themes remains the dislike of having a boring day job. ‘It’s a never ending story,’ Williamson explains. It’s kind of funny that last year’s album Divide And Exit finally got the band a certain amount of popularity after plenty of independent self-releases in the past. They didn’t change their sound; it was just the right time.

It’s kind of interesting, having a breakthrough as an artist in your early 40s… Are your age and wisdom helpful when it comes to facing the whole industry and expectations? Would you acted the same way when you were in your early 20s?
JW: No way. We got lucky. If I was twenty doing this I’d be a cunt. Saying that, getting used to the media is something I personally have noticed. Interviews in the mainstream can be a little ‘edited’ you come out as something you are in actual life but not as bad as the article portrays if you know what I mean.

Speaking of the media: You’re tweeting a lot and got a rapidly increasing following. On the other side you’re criticizing media propaganda. How much ‘media consumption’ is healthy?
JW: I’m addicted to the internet and I find myself constantly putting stuff up, it’s a problem. The propaganda I detest is the ‘image’ record companies put on shite bands. The lies from Westminster etc. My consistent ramblings are nothing compared.

‘If I was Twenty doing this I’d be a cunt’

But one question remains – where is the uprising? I mean, Western civilization is at a critical point and the decline of capitalism and governance is inevitable; our rights as people are constantly cut by the system. Why isn’t the majority already on the streets?
JW: I think capitalism has evolved to such an extent that its mass is completely aligned with change, change in social habits and tastes and change in approaches to counter culture movements, it stays one step ahead. What it allows at the same time however is it’s victims to become more of an abundance, to become many and we are seeing whole countries ravished by it. Eventually there will be no more countries to work on, to exact refined feeding onto and perhaps then it’ll break or have come up with more ways to condemn us. There are many ways to answer this question and for me it’s a life quest to keep adding to those possibilities.

There you have it. It’s a bout the spirit and attitude. It might sound like a cliché but SLEAFORD MODS are real and authentic. Way more authentic than all those Instagram-filtered so-called ‘individuals’ these days. Contemporary pop music might be as diversified and exciting as never before but there’s a shallow feeling that’s always attached to most things these days, especially since it gets harder and harder to ignore the problems our society is currently facing. How long will the voices stay silent? It just needs the right sound and the right band and a little luck.

Williamson and Fearn are right here at the right moment and hopefully just the start of something bigger. They might not like to hear that but in the end we think they are too detached from the world of contemporary pop music to get even bothered by it. They are passionate, without any doubt, but what are their hopes for the future? ‘We’re hopeful to get through it not coming out like cunts,’ the singer says with a smile. And exactly this is why the world of music needs a band like SLEAFORD MODS at the moment. In the end… what’s a movement if you don’t move?