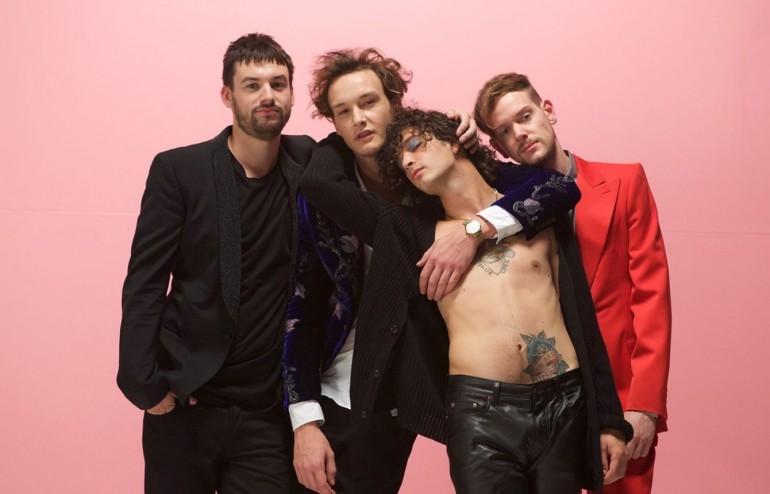 Let’s get right into it. THE 1975 are still controversial. Yet three years after their self titled debut album, the bands newest record (out this Friday, 26th) I like it when sleep, for you are so beautiful yet so unaware of it , drops – and boy, have people been waiting for this album. It’s called I love it when you sleep, for you are so beautiful yet to unaware of it and that itself is so typical for a band that constantly balances between overestimation and unpredictability.

Although the guys have been around for ages, 2013 marked their breakthrough year, thanks to a hit-packed self-titled debut. And it went as it always does after the world discovers that there’s a hot new band in town – endless touring, playing venue after venue, festival after festival but no new songs. That is ’till 2015. With the premiere of their single Love Me and the absolute crazy music that went with it – THE 1975 were back. And as it seems bigger than ever. After chatting with the band right at the start of their limelight success, we had to have another chitchat with them the second time around. And so we did – with charismatic frontman Matt Healy.

Right off the bat, we just had to know what propelled such a lengthy album name. Was is a sense of megalomania or what could the band simply not decide on how to shorten it? ‘It was just a lyrics knocking around. I wanted to make a bold decision – and that’s what it was. The title kind of is what defined the record, it’s overly romantic but also a bit emo. I think we are honouring our emo roots in that sense.’

So what exactly has changed then, springs to mind. The first record containing many songs that were written by Healy in his tender teenage years don’t exactly reflect the bands newer take on life.

‘Lyrically, there is a wisdom in myself, that replaces this hopeful naivety in the first record.’

Healy continues to explain his thesis: ‘Comparatively it’s a completely different record. We were very concerned in the cultivation of the kind of world we’d created with THE 1975 and felt like we wanted our fans to feel like they were “in on the joke” (in regards to all the subtexts within the lyrics).’

One of the more obvious changed the band has made has to be the huge contrast in colour. ‘We needed a colour scheme that as just as concise as black and white was, so the result is what you see now.’ Starting from the now pink emblazoned THE 1975 neon sign to the crazy colourful music videos Love Me and Ugh!, the band has seemly left behind the slick monochrome movement and just really gotten out there – guns blazing.

Matt Healy: ‘The day I start saying I’m this sexy rock star is the day I’d start being a wanker.’

That the band share a close bond with their fans has become apparent over the years. The way the crowd reacts when they understand the more sarcastic lyrics hidden under the melody, is a fact the quartet really appreciates. In our previous interview with THE 1975 (back in 2013) the guys already told us that they believed to really represent this generation of music addicts and it’s definitely a statement the band is still hanging on to and have taking this into the LP. ‘It’s part of our ethos, it’s part of our fundamental and stylistic vocabulary we stick to. It’s kind of our thing, it’s what I think makes us original. There were of course the elements of MAZZY STAR or SCRITTI POLITTI in the record but generational attitude and culture that surrounds the consumption of music is very part of that. They consume lot’s of different music and we create lot’s of different music.’

As much as any band would like it, THE 1975 haven’t solely been this successful or talked about due to their music alone. This is where we had to address the whole front man thing. Matt Healy: center stage, with this sort of cool arrogance, a lot of sex appeal and a presence as a lead singer that’s gotten lost over the last few decades. So we wanted to know how it feels to be this ‘stand out guy’.

‘I don’t think of it quite like that. It’s more about self expression. I don’t think about being the sexy front man. Again, I play a bit of a character with it. I think it’s kinda of weird when I hear stuff like this. The day I start saying I’m this sexy rock star is the day I’d start being a bit of a wanker.’

Most likely it’s this whole character playing that has had people rather confused with the bands’ music is supposed to be and what the band wants to represent. Once labeled by NME as the ‘Worst Band of the Planet’, they are now the magazines celebrated cover band. ‘Well that’s the way the world works. People are allowed to change their minds – I think if you go around holding grudges you’ll never evolve. I made a career on changing my mind. So if I turned around and told the press they can’t do it, I’d be a walking contradiction.’

This seems fair enough. Still, we were a little curious if their answer to our final question, what the words hope and passion meant to them as a band, would be the same as it was three years prior.

‘Both are close to our hearts, especially in regards to this record. The album comes from a place of passion and truth. The one thing we’ve realized if we can keep making records that we are proud of as this record then that would be my aspiration, my hope.’

One thing remains for sure: THE 1975 are here to stay and their new LP is a testament of their strength. They might continue to be the world’s most underrated pop band but with performances at Saturdy Night Live, Millions of social media followers and even Taylor Swift as your fangirl this could be a worse job.