Michelberger Music: Behind the scenes of Berlin’s most exciting new festival 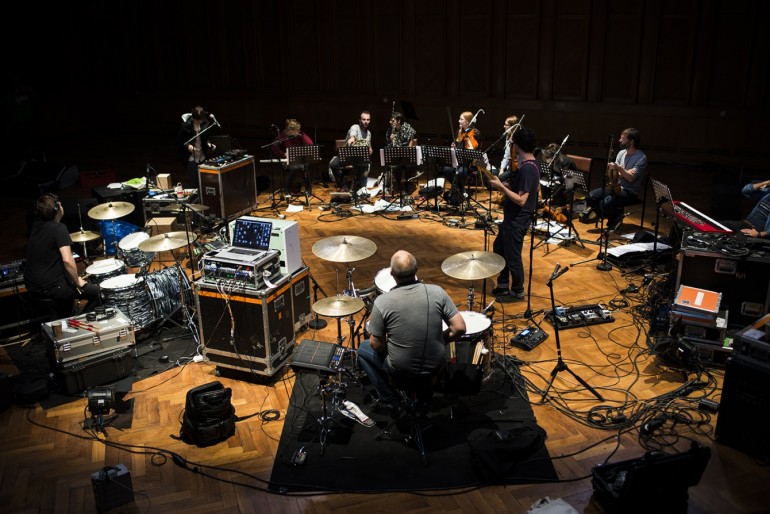 The strings are rehearsing …

‘Knock, Knock? Hello?’ Actually, we don’t really have to knock, the doors are halfway open. Electronic bits and bleeps fill the air, behind the piano a highly concentrated Alexander Ridha (aka BOYS NOIZE) is working on various beats simultaneously, it seems. Right next to him, Aaron Dessner follows the grooving rhythms in a concentrated way. He smiles, waves his hand and allows us to enter the cosy ‘Saal 4’ to follow whatever Ridha is currently working on. It’s one of the scenes that might define best what visitors can expect from the first ever Michelberger Music festival, happening on October the 1st and 2nd, 2016. The concept is as simple as it is unique in Berlin’s restless event scene. Because let’s face it: Berliners itself aren’t that impressed anymore when it comes to such big happenings; everything seems to have been done before in some form but this one is new. The idea put in simple words?

Lock over 100 crafted musicians in a giant rehearsal space/ studio, let them do whatever they want and present the result to 5000 people in the end. 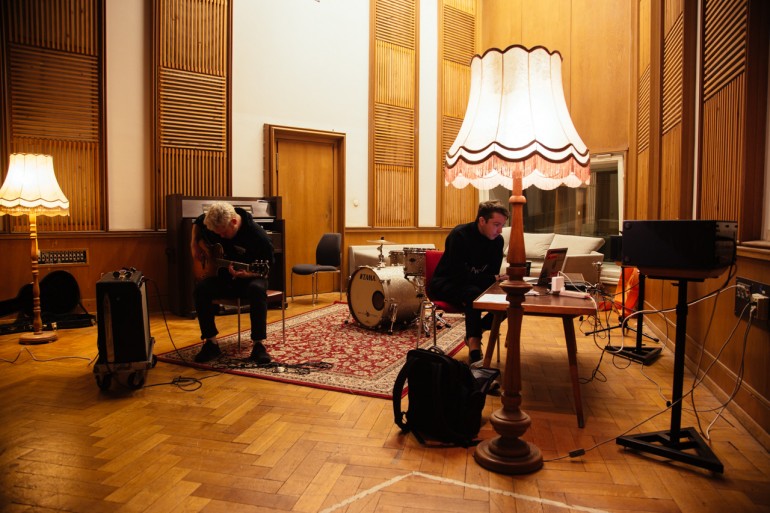 Just a few doors away from Aaron his brother Bryce is jamming with other musicians in the big concert hall of the Funkhaus Berlin. The two musical masterminds of THE NATIONAL are the driving force behind the event. Following the successful Eaux Claires Festival in Wisconsin – which they created together with BON IVER‘s Justin Vernon – the acclaimed musicians thought: Why not taking the idea even further? Since many musicians already collaborated during the festival why not making an entire event out of this?

Berlin seemed to be the perfect place for that adventure and their longtime friends Tom and Nadine who are running the famous Michelberger Hotel in Kreuzberg were the perfect supporters for that idea. Both visited the Dessners at the Funkhaus Berlin last year while they were recording the score for The Revenant and by doing that they ultimately fell in love with the venue, one of the few remaining critically underused ones in the German capital. Build in 1951 and mainly used for the broadcasting programs of the German Democratic Republic it was left empty for a long time following the fall of the Berlin Wall. Only in recent years it was rediscovered, partly renovated and used for recordings and live concerts again, despite being a bit away from Berlin’s hip districts in Kreuzberg and Mitte. 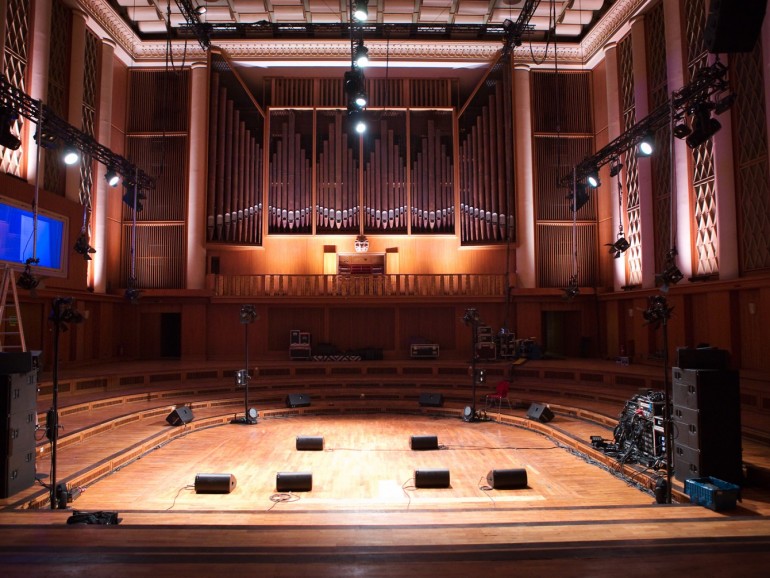 The hall awaits you

You can still sense a lot of that old GDR-spirit within those legendary rooms. The floor, the walls, the staircases, the old ‘Smoking prohibited’ signs, that delicate brown colour that represents those past days of German history pretty well – there’s something old-fashioned in it, but also something highly ceremonial. As we wander around between the recording sessions of the S T A R G A Z E Ensemble by André de Ridder and the big concert hall we’re passed by Yoann Lemoine, better known as WOODKID. He’s on his way to another room where he’s practising together with a group of dancers. It’s a busy but creative atmosphere that is sensible in every corner. Wild choir chants are coming out of a dark room while another room is drowning in furious almost drum-and-bass-like beats. We don’t have an idea what’s going on and that’s the whole part about it, right?

Let the music set up the rules

In the microcosm of Michelberger Music everybody is treated equal. It’s a non-benefit production where none of the musicians get paid. There is no commercial partnership. Hell, there isn’t even a guestlist or accreditation possibility for us ‘spoiled’ journalists. The ticket prices cover up the production cost and that’s all. Beyond that point everybody is equal. Visitors get access to selected studios and the big main stage (which is the former parking deck of the venue). They can freely move around and so can the musicians. Exchange about the music is highly welcome and who knows: maybe you’ll end up with a glass of wine next to POLIÇA singer Channy Leaneagh at the bar afterwards. A not entirely impossible scenario. 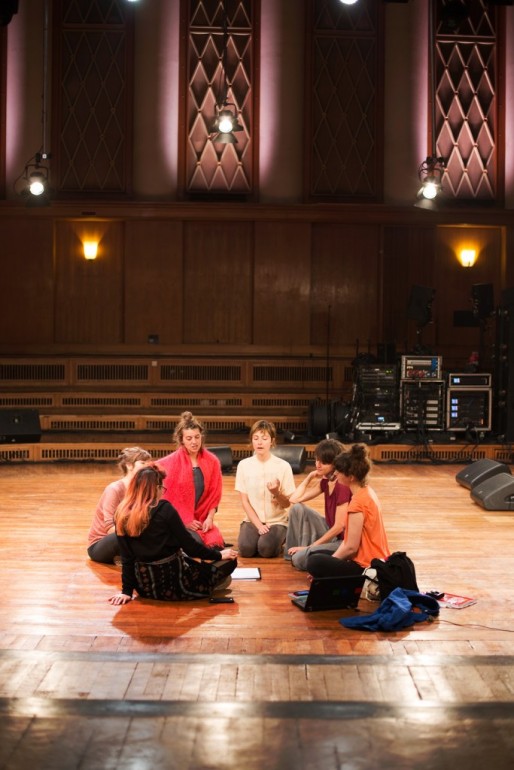 The Women’s Choir is warming up 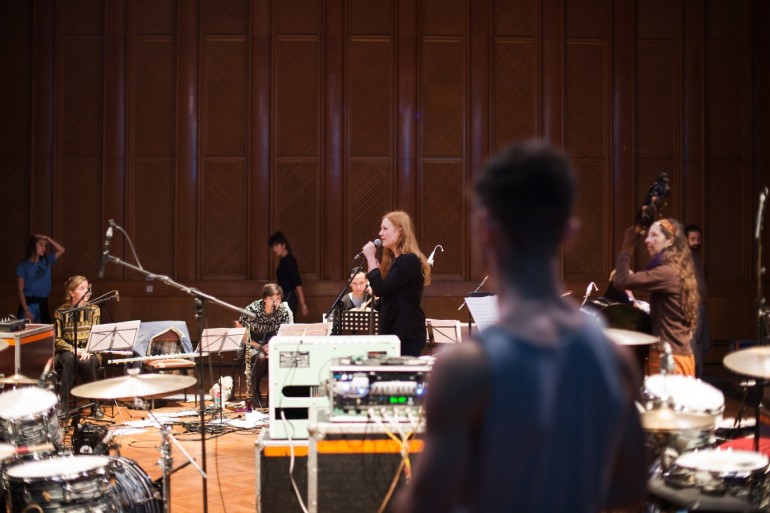 The concept is smart. Some people might get attracted by the big names but they carry the lesser known ones. The result remains highly unpredictable. In other words: Don’t expect DAMIEN RICE to perform the The Blower’s Daughter. Expect nothing specific but great and adventurous music, created by open minds and acclaimed artists.

Michelberger Music celebrates a respectful atmosphere between those different and diversified people.

In a festival environment that is often driven by big names, big hits, risk-avoiding line-ups and predictability (Yes, we’re looking at your direction, Lollapalooza!) the Michelberger Music idea really stands out. It celebrates the essence of music and bridges gaps between genres, artist popularity and even between audience and artists as well. 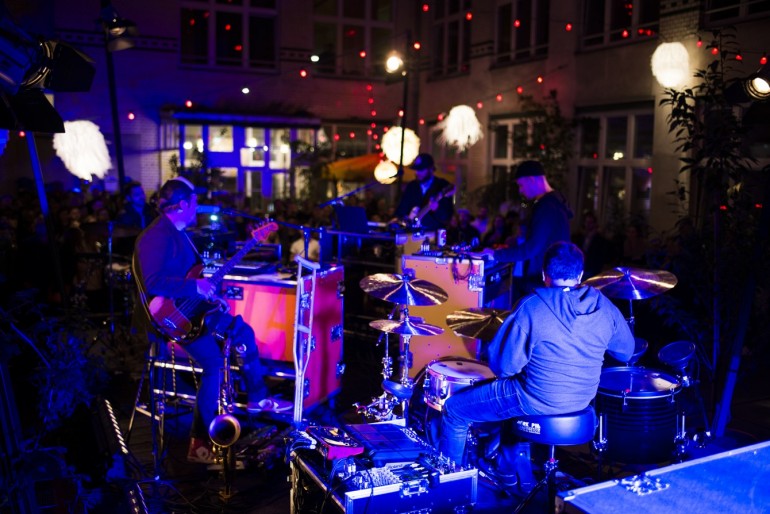 Flash forward to Wednesday night at the Michelberger Hotel. Justin Vernon and his band have arrived for an exclusive BON IVER performance in the courtyard of the building which is pretty much closed during this week as most of the artists are sleeping here. A lot of the musicians from the Funkhaus are attending the show as well. Vernon and his band perform almost the entire and pretty good new album 22, A Million – a massive alternative folk monster, drenched in autotune, synthesizers and saxophone. Small mistakes made by the band are faced with laughter between those four folks.

In some way, the brave nature of 22, A Million also fits perfectly with the Michelberger Music concept: Tearing down expectations and old structures; building up something new.

That’s basically what BON IVER did with their third album. ‘That’s it for tonight’, states Vernon after one hour, ‘We’re gonna save something for the weekend at the Funkhaus.’ Bryce Dessner is passing by with two glasses of red wine, all sorts of people from different creative origins are discussing the concert as well as the approaching festival. It’s just a glimpse of the entire potential that might unfold itself over the next weekend. We surely can’t wait for it. 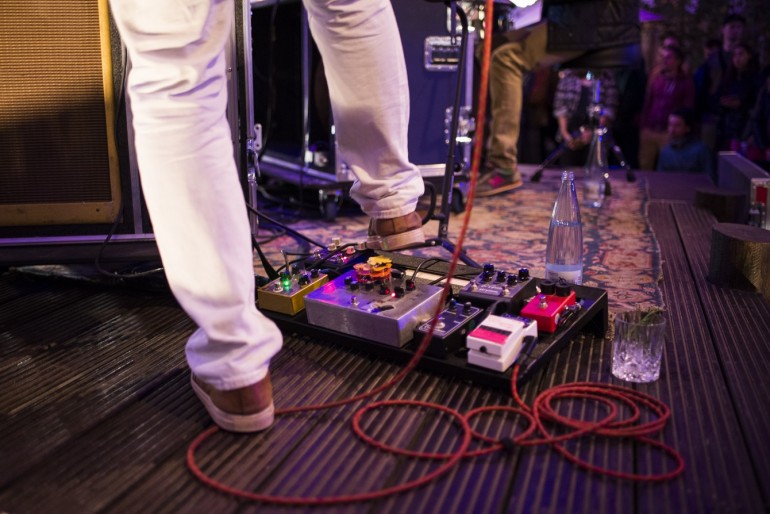 Michelberger Music will be held on October 1 and 2 at the Funkhaus Berlin. Festival tickets for both days as well as single tickets can be purchased right here.

All Photos, if not credited otherwise, by Michelberger Hotel