Introducing Mykket Morton: How The German Indie Rockers Take Control On Their New EP ‘Upside Down’

Right at the heart of Kassel, by the train station, is where you’ll find the FRANZulrich, the venue and art space that’s been providing the city’s creative kids with a place to make artistic noise and mess since 2019. And at the heart of the FRANZulrich, both spiritually and often physically, you’ll find the band Mykket Morton. The venue’s founders have spent a good part of the last couple of years holed up in its studio, putting together their new EP Upside Down, a fresh stylistic adventure for the band, taking their sound into new territory, a mix of stomping, strutting rock music and bubbling, eerie electronica.

Mykket Morton have been around for a few years now, moving between different forms. The band started off life as a collaboration between Julian Blumnauer and Claudio Hohmann, who got together for a more stripped back, acoustic project back in 2015, and wrote the songs that would eventually make up the band’s 2016 debut record New World. When the time came to take that record on the road and play some shows, they added a couple of live members, and the whole thing began to transform – by 2019 and their second EP, Traveller, the band were a four-piece, with the additions of Philipp Jünemann and Marc Seefried, and their sound was begging to morph too – by the time they made Upside Down, they were almost a new band. “When we started working on Traveller in 2018 we were in a whole different place”, says drummer Seefried. “It was the first record we were going to write together, and we were excited just to explore the musical and personal dynamics between the four of us, which was awesome. But looking back I feel like you can hear that we were still in the process of getting to know each other, and I think you can hear that as a certain politeness and understatement in the songwriting and in the sound of Traveller. As some of the songs on Traveller had evolved from rough sketches from the New World days, we were not yet able to shake off a certain image of what we thought Mykket Morton had to be”.

By Upside Down, the four musicians had found a way of working together, and were able to build the sound they were looking for: “I would say that creating Upside Down kickstarted our development as a band for several reasons. ‘New World’ was more hermetic in the sense that it was written in more of a singer-songwriter state of mind, and thus primarily featured acoustic vibes and the vocals, while the rhythm section was a bit more in the background. But even though ‘New World’ placed vocals and guitars much more prominently in the mix than ‘Upside Down’ does – both in the arrangements and the mix – you can hear how much Julian and Claudio have evolved with their instruments and with their voices. And by that I don’t necessarily mean pure technical skill, but more importantly attitude: ‘New World’ sounds introverted and shy, and feels like they were ‘playing it safe’ so to speak.”

“Upside Down on the other hand has much more confidence and I think that is why it comes across tougher, more rhythm-driven and with a rock attitude maybe, but mostly you can hear it in the vocal performances. You can really sense that there is deep personal emotion involved, which pushed both Julian and Claudio to leave their comfort zone and gives their performance authenticity”.

The making of Upside Down started in late 2019, and midway through the process, COVID introduced itself to the world, which limited what the band could do in terms of freedom and budget. So they ended up recording it themselves, in their own studio at the FRANZulrich. “We wanted to record in an established studio with an established sound engineer and have the songs mixed by an experienced producer, but as COVID kicked in, our budget was vaporized. As we were still impressed by the great job that Joe [Joaquin], a mixing engineer from Berlin, had done on ‘Traveller’, we needed a moment to consider if we really wanted to go D.I.Y. with ‘Upside Down’, even though Julian had just graduated as a sound engineer from the HOFA-Institute. But we finally made up our minds and it turned out to be the best decision we could have made”. 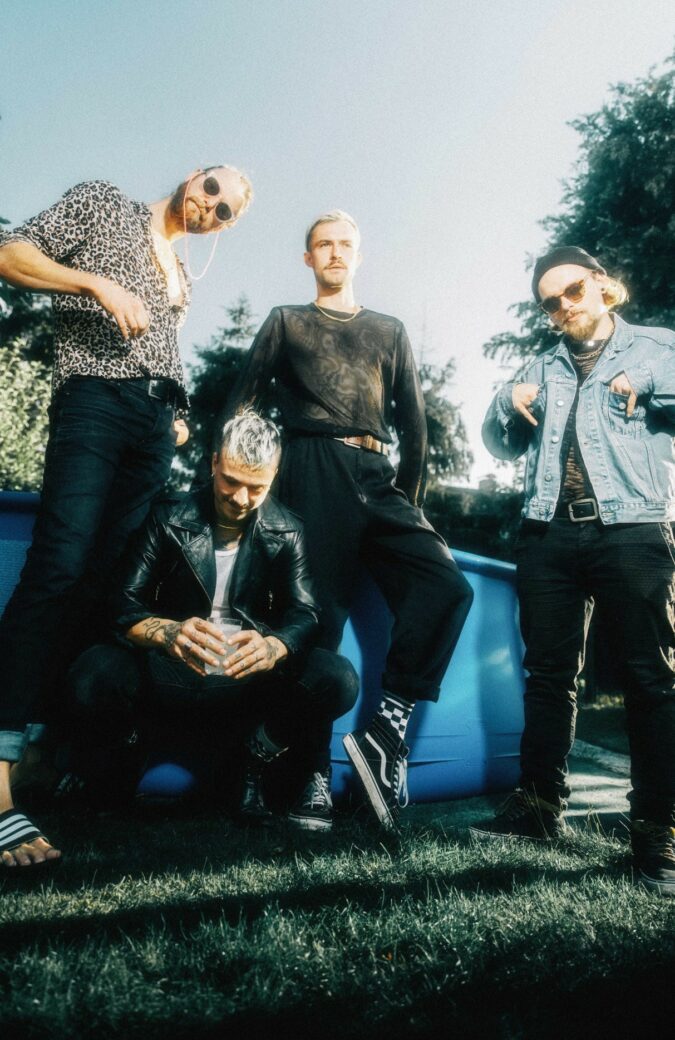 In the years leading up to Upside Down, and the during the recording process, the ground the band stands on has shifted a lot. And that is reflected in the record’s sound. New World and Traveller leaned more towards a softer, gentler sound – in contrast, on Upside Down the band have discovered a swagger and a toughness that gives strutting, rock’n’roll songs like Better Off and Show Me their personality. The music on the EP is also darker – the title track and Cover Me capture a wave of nervous anxiety and tension, and blow it up into something immersive and overwhelming. “Creating ‘Upside Down’, we didn’t have a plan regarding the musical direction we wanted to take” says Seefried. “It really was all about the idea of not being afraid of new musical ways, but to really go all in with these new ideas if they serve the message of the song. I like it when bands show a whole spectrum of musical influences. Especially when watching live shows, I think it is awesome if bands take you on a journey through different musical worlds, and not bore you with the same old sounds over the course of an hour or so. If we were able to achieve that, I would be really happy”.

The record’s mood came easily to the band: “I cannot really speak for all of us, but I think ambivalence, being torn between conflicting emotions or between what your head and your gut feel are definitely major themes. Those feelings where thoughts spiral in your head for what feels like an eternity without ever coming to a conclusion. Those moments when you just want clarity, and you blurt out something as if you have never been more certain about anything, then and the next second you are convinced of the total opposite and you start to feel like you are losing your mind”.

They made the album at the FRANZulrich, and the venue itself serves a couple of aspects of the band’s philosophy, both the idea of contributing to a cultural infrastructure outside of the supercites, and that making good art requires a space of your own to be free and creative in. The building came into their lives over the last couple of years: “The FRANZulrich was initially born out of the desire to have a space where we could be creative 24/7. I think most artists dream of a space like that. Julian’s father Claus was looking for a place to build a workshop for himself, so we went out searching for real estate together and after some time we found this completely rundown property that had great potential, but that was too big for just the five of us. That’s when we had the idea to partner up with others who had similar visions, and started to build this place that now has two practice rooms, a recording studio, a workshop, an office, and most importantly the event room, which can accommodate 120 people. We did not know what to expect when we were building the FRANZulrich, but within a very short amount of time, long before we were close to finishing it, it became very clear that there was such a great need for cultural events away from the big cities, and we really made it our agenda to make Kassel a cultural hotspot. We were able to squeeze in a few test events just before the pandemic, and were even able to make international contacts and get artists from the U.S. and the U.K. to play at the FRANZulrich, which was insane, and really motivated us to build this thing further as soon as the situation allows it again.”

“As a musician, I like the idea of not only being in a band and hoping for the best, but instead really taking fate into your own hands and becoming a vital part of the culture, by not only using existing cultural infrastructure but by building it yourself. This whole idea that culture is a collaborative effort became very rewarding to us, and as we also benefited a lot from Kassel’s creative network already, as far as collaborations with filmmakers, event technicians and of course other musicians are concerned, we hope that the FRANZulrich can become a place where we can give back to the community and where creatives can gather and mingle and new cultural projects are born”.

The entire process of making Upside Down, from a stylistic shift to a pandemic, saw a lot of change come into the world of Mykket Morton. It also gave them a songwriting philosophy to take forward with them. “Our mantra evolved into the standpoint that we would never make any musical decision out of a negative impulse, like being afraid of how sounds or musical choices could be perceived, but instead by the determination that if it suits the song and if we like it we will do it”, says Seefried. “Don’t force a song into a shape or a sound that reproduces a certain image you might have of your band, but instead, really let go of all presumptions and make it the only goal of your songwriting to get the musical and emotional idea across as clearly and as unfiltered as possible, without having your head or your ego getting in the way – ‘Just listen and let the song tell you what it wants to be‘”.

Upside Down is out now on Margherita Music.