The German multi-instrumentalist and producer Stefan Streck, aka The Micronaut, teamed up with the Olympia fencer Anne Sauer to combine their passions. Fencing is only one track of the forthcoming record Olympia. Like the title hints the LP is inspired by Olympic Sports each of the tracks being named after a different discipline.“Olympia means more than sports, it’s about camaraderie and solidarity, which is the most important these days,” the musician says about the record. Olympia is due July 3rd and Fencing foreshadows the experience showing the elaborate production style of the artist. The dynamic track intensifies with each note, not unlike the tension and emotionality inherent to the sport.

The Micronaut‘s mellow guitar is accompanied by vocals by singer and spouse Saskia Streck. Especially the video to the single highlights the dynamic energy of music and fencing. Featuring a performance of Anne Sauer, who usually graces the german national fencing team, it becomes a special experience.

Anne: The topic Olympia is incredibly interesting. How did you get the idea of working with fencing out of all things?

S: I wanted to call the album Olympia, that much was clear and so I named each track after an Olympic discipline. My wife sings Fencing and wrote the lyrics to it. The two of us like to play ping pong and the way she looks when she plays makes me laugh. She looks like she is fencing, that is how we got the title.

Stefan: How are you coping with the Olympic Games being pushed back? Is the extra year of training useful or is it hard for you to stay at the level you are at?

A: The qualification for the Olympic games stretches over almost one year anyways so I think it is rather bad to have it pushed back even further because of corona. We had already traveled to the location of the final match but then it was postponed. That was too bad especially because the opportunities to train are lacking at the moment and that affects the fitness of all the fencers.

Anne: The concerts must be super exhausting. How do you keep yourself in shape for that?

S: As long as I am in the mood for it, every show feels like training. After a gig, I sometimes think I just ran 10 kilometers – that is what it feels like. Like everybody else corona forced me to take a break and I have to work hard to stay fit. I might just leave my car at home more often and run to the studio.

Stefan: Do you have any rituals you do before fights?

A: I do have a sort of ritual but it is not as extreme as for example, Nadal before every move. Before each fight I clap both of my hands onto my legs, arms, chest, and face to ground myself and to keep in mind that everything I need to win is in its place. 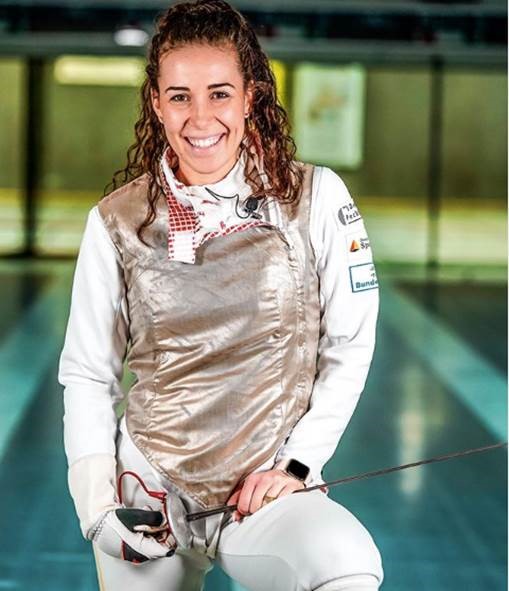 Anne: Have you ever fenced? If Yes, how was that for you? If no, what kind of fencer do you think you would be; a tactician, the offensive or the defensive?

S: I know for sure that I would lack speed. Maybe I would fence the way I play ping pong. I’d try to find out my opponent’s weaknesses to win the match without taking big risks – so probably the defensive type.

Stefan: Have you ever gotten injured while fencing?

A: Yes, 2012 I had to get surgery on my index finger. They had to attach a hook to my bone to keep the ripped tendon of my finger in place. For one year I could not pick up a floret. That was hard.

Anne: Do you have a favorite sport?

S: Handball has always been my favorite sport. I played for fifteen years until I moved. I did not look for a new team then. But a couple of years ago I used to go to playground with a friend and his little daughter. That is where we found a ping pong table. So my friend and I started playing ping pong while she was in the sandbox. After a while we got better and better. Eventually we bought proper bats and today we are part of a team.

Stefan: What is the most common prejudice that you hear about fencing?

A: Most people are very interested and curious when I speak about my profession but, of course, I have been compared to the Three Musketeers and Zorro. But I guess a stereotype would be that fencing is an elitist and noble sort of sport. Of course, it is sort of aesthetic, still it is everything but elitist – it is open to everyone.

Stefan: Which one of the three musketeers is your favorite?

A: Of course, D’Artagnan. He is the only one who dives headfirst into adventure but remains loyal and stands up for the people around him.

Anne: What are commonalities between music and fencing?

S: To me it is mainly the adrenalin; being excited and nervous before starting. Secondly, the drive to learn and to reach another level is also something that both disciplines unite. The first few steps are easy to climb but then comes the phase when making progress becomes hard. And of course, they are both passions of mine.

Olympia will be out 3rd of July via Ki Records.