Tour Diary: Giant Rooks on surviving as a young band on the road 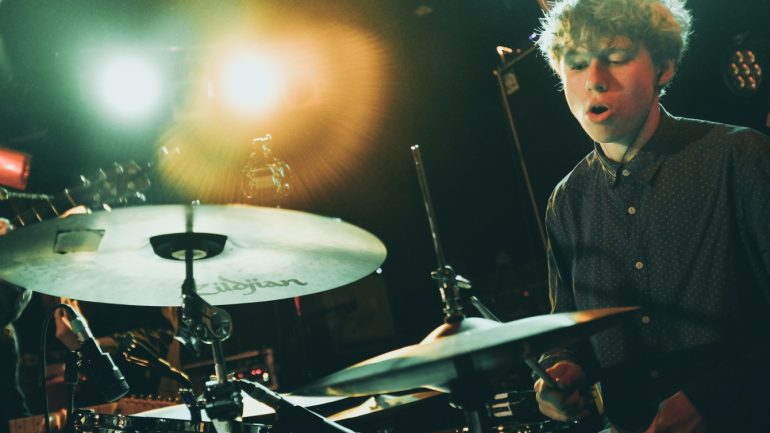 Munich: Exhausting and vigorous! But it has always been a pleasure to have a blast on stage!

The first thing GIANT ROOKS felt stepping off the stage at de Gudde Wëllen was emptiness. The band had just completed the first ever headline show of their career, kicking off their New Estate tour in front of a sell-out crowd at Luxembourg venue de Gudde Wëllen. ‘I was very self-observant and had to get into it to begin with. I’ve been pondering quite a lot’, reports guitarist Finn Schwieters, and singer Frederik Rabe immediately adds ‘Yeah, way too much. It’s never been like that at our support shows.’ – ‘I really hope that goes away quickly. You always want to outdo yourself’, concludes Finn.

The five musicians from Hamm in North Rhine-Westphalia have clearly been building up to this point since they’ve appeared on the radar in 2014. Playing a number of shows in their hometown of Hamm and in the city of Münster before they were picked up by a booking agency, the band subsequently started appearing on tour posters throughout Germany, Austria and Switzerland as they supported national and international bands like KRAFTKLUB, VON WEGEN LISBETH and THE TEMPER TRAP and played numerous festivals. ‘We got along well with all bands that we supported’, Frederik recounts. The bands they supported for longer tours, on the other hand, have all become good friends of the band. ‘There’s an implicit understanding of each other because you’re in for the same thing’, explains Finn.

‘You don’t talk about financial problems and the likes, rather you just get to know each other as you would with any person you just met. When we supported THE TEMPER TRAP, we only saw them for about an hour at each of the two dates and there’s no time for deep conversations to develop in that little time.’ 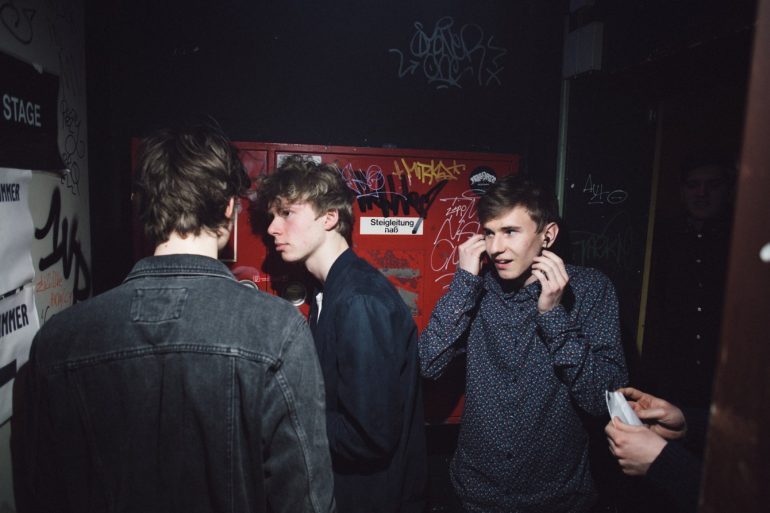 It seems like the constant touring and the release of a series of music videos has come to fruition, as GIANT ROOKS quickly found themselves playing to bigger and bigger audiences while their new material has been picked up by radios throughout the country. The New Estate EP, their first to be published via a record label, had been released for less than a week, yet still on that Thursday, the zakk concert hall in Düsseldorf had started to fill up as we were talking. ‘It’s completely different touring as a headline act. In fact, I’m just as nervous right now as I was before the very first gigs we ever played. It feels like starting all over again’, confesses Frederik.

‘With a support show, you feel like you don’t have anything to lose, but with a headline show, you know that everybody comes to see you. The tension is rising, but we’ve prepared ourselves very well and we’re a well-rehearsed team by now.’

It’s all about extenison

After two years of playing support shows, GIANT ROOKS had to adjust to playing longer sets. ‘It’s incredibly difficult to compose a set so that it stays interesting throughout and does not drop in intensity. As a supporting act, you just power through the entire set, but you cannot do that for 75 minutes’, explains Frederik. Aiming to re-enact their material as closely as it was recorded, they rehearsed the tracks from their new EP intensively and fine-tuned the ones they have not recorded yet. It goes both ways, as playing live gave the band the possibility to develop and improve their songs as they were on tour.

Being such a young band as GIANT ROOKS places an additional burden on the organisation of a headline tour, as two band members still attend their last year of high school. ‘I would not have expected it to be that stressful. When we finished our show in Luxembourg, we had to travel back at 1:30 and only got home by six in the morning. Playing support shows turned out to be more relaxed since we didn’t play for that long’, recounts Frederik. It is this relentless fervour for playing live that earned GIANT ROOKS their reputation as an impressive live act; for two support shows with buzzing German indie-pop sensation VON WEGEN LISBETH in Berlin, the band even decided to have three of their members flown in to play the show.

‘When we started out, we decided that it’s all or nothing and I think that this is the formula for success for any established band.’

But the course of things has also streamlined expectations towards their career prospects for the individual band members. While Finn and Frederik, who started the project together, necessarily feel like they need to push the project further given that they have already graduated, they also say that ‘every one of us has the desire to only do music and do it for a living’. ‘Only a year ago, we used to see it differently from Luke and Finnbo’, says Frederik, ‘but by now, everyone is on the same page and so invested into the project that there is little disagreement in that sense.’ 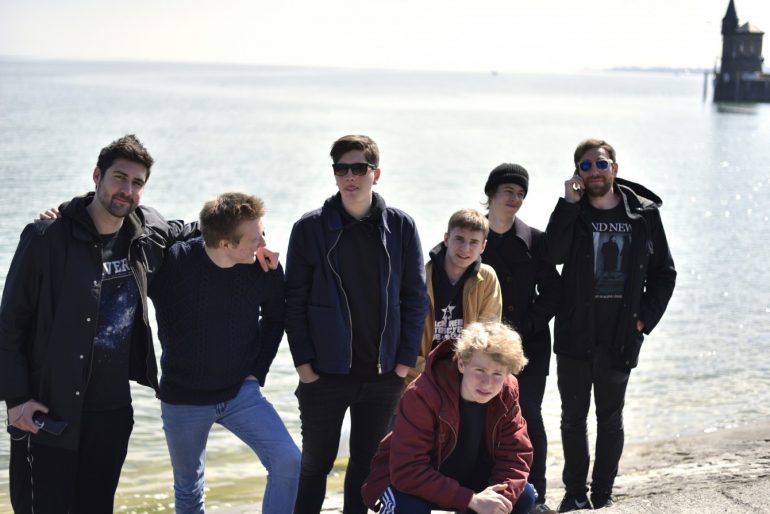 Bodensee: on the way to our show in Zürich. We were glad to have had Albert af Ekenstam from Sweden with us who made these days unforgettable.

There’s a lot to be taken care of on tour, especially when you manage yourself as GIANT ROOKS do – tour management duties are being handled by keyboarder Jonathan Wischniowski himself, who through the past months has evolved into an event engineer of sorts. The workload varies; as Frederik tries to go through lyrics or warm up his voice, he constantly finds himself interrupted. ‘Time flies by really quickly’, he says – disagreeing with his colleague Finn. ‘Sure, there’s a lot to be dealt with. But in my impression, in between those tasks, most of the time is spent waiting for something.’

Riding a rollercoaster of relaxation and exertion

Finding music for the tour bus that is equally pleasing to everybody proves an additional challenge. It doesn’t help that drummer Finnbo has a pronounced distaste for rap music, while both Finn and bassist Luca Göttner love the genre – a frequent source of discussions. Through all this, tensions occur and nerves sometimes get stretched. ‘It happens that we piss each other off or tease one another’, explains Finn. ‘However, often when there’s been a bit of fighting, it can translate into an additional energy onstage.’

It is probably this constant rollercoaster of excitement and boredom, relaxation and exertion that best describes the experience of touring as a young band. ‘Especially after you played to big audiences, you do fall into a sort of limbo. Sitting alone in the backstage after being in front of a big crowd is a stark contrast’, explains Frederik, and Finn adds: ‘You’re surrounded by so many people on tour, your bandmates, journalists, technicians and promoters, and when you get home all these people are gone. You do have to adjust to that, but it works.’ 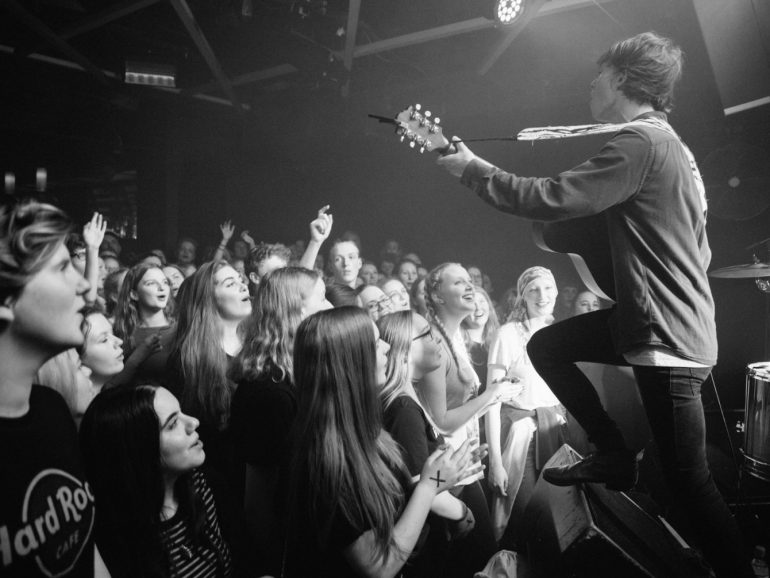 The people are going crazy and so do we! / © Nils Lucas / www.nils-lucas.de

All things considered, GIANT ROOKS still consider themselves lucky since they still live at home and don’t have to worry about financial burdens. ‘It certainly has its upsides, especially that we have a really good rehearsal space that is close to all of our homes, which is super nice since we can rehearse very often’, says Frederik. Their hometown itself, on the other hand, leaves a lot to be desired. ‘There’s a lack of cultural life and interesting bars to go to in Hamm. We’re on the road a lot and thus get to discover lots of interesting places, so that doesn’t bother us that much. However, I could never spend the rest of my life living there.’

‘I could imagine myself living in a bigger city studying something in one or two years time, but ultimately, we all decided that we want to go through with playing music as long as it is possible and as long as it works out for us.’

At the moment though, with two band members still in school, being based in Hamm is beyond discussion. ‘It has become quite stressful indeed, but the two of us who still attend school are relatively relaxed about it – they are both doing well at school.’ – ‘You can do so much with your spare time if you’re organising yourself well’, adds Finn. ‘Despite the stress, it’s quite a good perspective to know that in four months time, it’s going to be over and all the effort might have paid off.’ 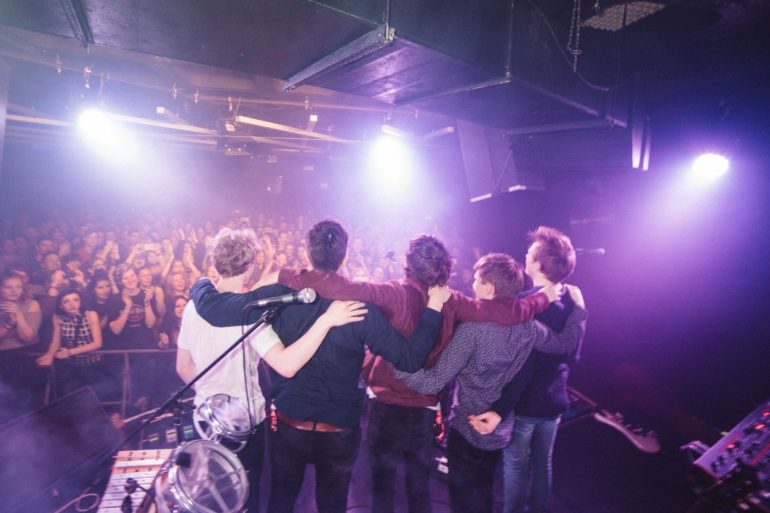 Thanks a lot to all the people who came to our shows and made this time so special for us! / © Nils Lucas / www.nils-lucas.de

The interview was conducted by Igor Franjić and Chris Hegholtz.
Photos courtesy of Giant Rooks, except where noted.