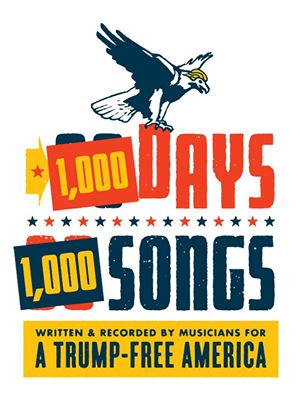 You all remember that ‘30 Days, 30 Songs playlist’ from last autumn which featured protest music from acclaimed artists like DEATH CAB FOR CUTIE, FRANZ FERDINAND, JIM JAMES and others, right? Well, as you all know right now, the result of the election wasn’t quite what the playlist’s curator, writer Dave Eggers, and many other liberal forces had in mind. But just because Donald Trump got elected doesn’t mean the protest has to stop now, right?

And that’s only one way why Eggers decided to just keep the project running for four more years. 1000 Days, 1000 Songs will feature new music on every weekday right till 2020 as it constantly evolves via different guest curators, artists, celebreties and who knows. They probably get Obama on board as well. Here’s what the project has to say about its continuation.

‘To combat apathy, entertain the citizenry, and provide a soundtrack to resistance, over the next four years, the producers of 30 Days, 30 Songs will assemble a playlist of 1,000 songs. One song every day to get us through what promises to be a tumultuous and frequently dispirting and certainly bizarre presidency. The playlist will feature original tracks, unreleased live versions, remixes, covers, and previously released but relevant songs that will inspire and amuse and channel the outrage of a nation. Despite the results of the election, we still believe it’s possible to build a more inclusive, equal, and just America. The world will not end on January 20th. It will continue to move forward, and it is up to us to chart its course. In the coming weeks, we plan to raise money for this endeavor through a crowdfunding campaign. If you enjoyed the work we did during election season, please consider supporting this next phase of the project.’

The first contribution arrives in the form of a rare 1989 live version of the R.E.M. classic It’s The End Of The World As We Know It (And I Feel Fine) which might be a too obvious choice but is still quite fitting. And while listening to these Antri Trump tracks please support any form of peaceful and legal protest, especially in the USA. The people from Women’s March have listed 10 actions you can do against the policy of the Trump administration, starting right now.