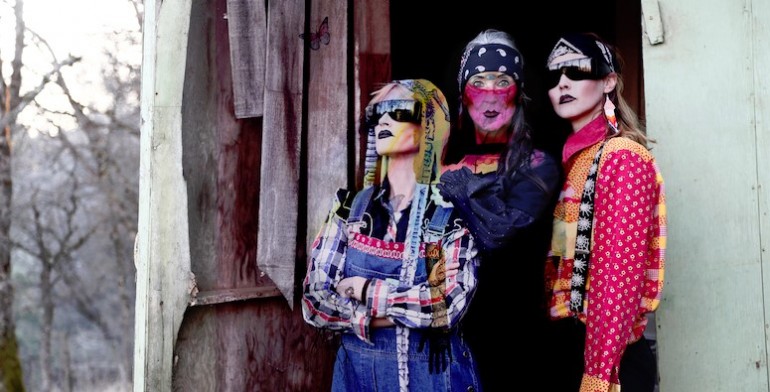 This week’s the week where Donald J Trump officially becomes president of the United States of America and it still feels kind of weird to write that down. One thing remains for sure: the protest isn’t about to stop and acclaimed indie music two-piece COCOROSIE will make sure to keep the opposing fire burning. The duo now released Smoke ‘Em Out a brand new song against the new president with also features the one and only ANOHNI as featured guest. According to a released statement the bands wants to ‘inspire the weary-disappointed hearts of so many crest-fallen citizens’ with this new song.

‘Today we share a new song to inspire the weary-disappointed hearts of so many crest-fallen citizens. We just started working on a new album, but “Smoke ‘em Out” begged to be turned loose on the world now, as a means of participation during these turbulent yet invigorating times. Joined on guest vocals by our fellow Future Feminist ANOHNI, ‘Smoke ‘em Out’ welcomes the new character who will be occupying the White House with a mob of women and children armed with forks and knives. In the wake of this unnatural disaster, we feel a call to rise, shout, and burn the house down. ‘The future is female’ and a very necessary force to be reckoned with.

In the wake of the new COCOROSIE track the band’s Bianca Casady has also released a poem which goes even deeper into the whole Anti Trump subject. You can find it below the song right here.

Bums rush out the door
Mama didn’t want you anymore
A thornless rose in her side
Despite being bonded by blood lines
It wasn’t the right time
She said no more free load
This is the end of the freak show
Half shake and heart broke
Half slewed half snapped
A rat trap snapping back
Hand bone hand me down
Baloney sandwich lonely clowns
Smoke laugh toke craft
Porn blood piss grass
Piss miss heart hand
Tried to take a stand
Down dropped sales low
The joys and woes
The curtains slowly close
Burning Down the House
Smoke em out smoke em out the dead girl shouts
I was on the verge like so many times
Got children and wives waving forks and knives
The new sound circles round
Slaughter raging death dice
Fall hot house burn down
Foes upon foes, west to east it goes
The dead girl says let’s just be friends
In the glorious tone of marrow and bone
These days of ore
The chance we meet once more
The smoke lightning crack asunder
The boom of guns the peel of thunder