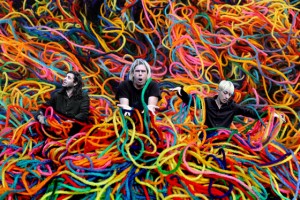 American wave rockers LIARS shared details about their new studio album with the world. Mess is the name of the new record which will be released on March the 24th via Mute Records. It follows 2012’s record WIXIW. And as colourful as the artwork and promo photos for the album are as joyful might have been the recording process.

Singer Angus Andrew on the new albumt: “We are a reactionary, or maybe a better word is schizophrenic band. We go from one extreme to the other. Working on the last record was really doubtful and paranoid, and that’s fine, but it just meant that when work started on this one, it was the exact opposite. It was way more instinctual, fun and confident.”

Today LIARS give a first glimpse of what to expect from the album. Mess On A Mission is the first song and you can stream it right here and watch an album trailer below.