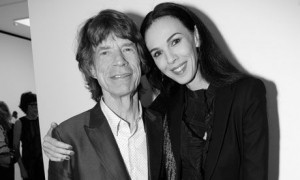 Last night, L’Wren Scott, girlfriend of MICK JAGGER, has been found dead in her Manhattan apartment. The Police do not suspect a crime. THE ROLLING STONES‘ frontman and the 47-year-old designer had been together since 2001.
The news reached Jagger in Australia where THE STONES wanted to play six shows. They have not commented yet if the planned concert tomorrow will take place. There will be a statement during the day.