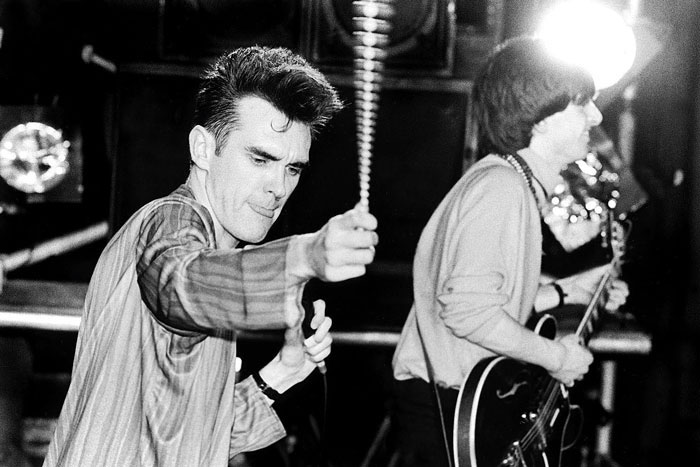 Barely any interview in the last years with JOHNNY MARR and MORRISSEY that didn’tcame up with the way too often discussed ‘reunion’ topic regarding THE SMITHS. Especially the two protagonists have gotten tired of all questions about this but now, it turns out the two gentlemen briefly discussed the possibility of getting back together in 2008. MARR revealed the information in a new interview witn The Guardian, promoting his upcoming autobiography Set The Boy Free (which arrives later this week).

Back then the guitarist was busy with remastering all albums of the legendary indie rock formation and also contacted MORRISSEY and bassist Andy Rourke about it back then. Spontaneously – as both were back in Manchester – they met up in a pub, for the first time in over a decade. MARR describes the scenery in the following words:’

The conversation about re-forming came out of the blue. I didn’t go there with that in mind. But there had been quite a few rumours about it, so naturally we discussed it. ‘It could happen…’ ‘How d’you feel about it?’ ‘What if?’ And off we went. ‘Who was more keen?’ I think we were both as keen as each other.’

So, for a few days the idea of THE SMITHS getting back together was actually on the table and both seem to be interested. But then due to their daily lives – a sudden radio silence came along which ended all thoughts. MORRISSEY went back to recording a new album andMARR toured with his band THE CRIBS back then. Speaking about his relationship with the excentric singer the Mancunian now reveals that their friendship is mainly over and that both sides are okay with it:

‘I think it’s run its course. I don’t feel unfriendly in any way towards Morrissey – there’s just no need for it. One of the things we had in common was that we lived for work, and we’re too busy doing what we’re doing now.’

Set The Boy Free arrives in book stores soon and you can relive our interview with the legendary musician from 2014 right here as well.