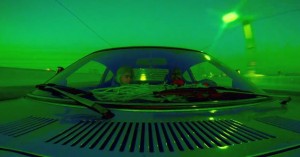 As some of you might remember wave pop singer George Lewis, Jr. aka TWIN SHADOW is currently running his Under The CVRS video series. Here he regulary covers songs requested by his fans. And why we lost a bit track of it after his version of Not In Love by British art rock band 10CC this new one really caught our attention. TWIN SHADOW got his hands on one of indie music’s holy grails, There Is A Light That Never Goes Out by THE SMITHS.

And by giving it a different and more synthpop sounding twist Lewis, Jr. managed to give this evergreen a few new ideas. The remake also comes with a fancy music video that also features Samantha Urbani of indie pop band FRIENDS who also sings on the track. Watch it right here and fall in love with this tune again.