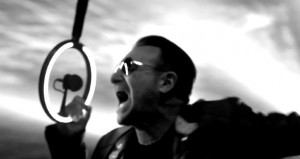 Irish superstar rockers U2 report back with the first material of their long awaited new studio album. Last night the legendary group revealed their new song Invisible which marks the first teaser of the new record. Besides Ordinary Love, last year’s contribution to the Nelson Mandela biopic, this marks the first new material by the band in four years. The follow-up to 2009’s No Line On The Horizon was recorded with producer Danger Mouse and is about to get released in the summer of 2014 with further details of this still to follow.

Invisible is also a chance to support Bono’s AIDS awareness campaign for (RED). If you download the track now you’ll instantly support the organization. A good move, as always. You can watch a teaser clip for the new U2 song right here.