Interview: FINK – ‘It’s not unusual that I fucking start crying’

As crafted songwriter Finn Greenall aka FINK in about to release his long awaited new album Hard Believer on July the 14th it was about time for a little update on what’s going on with this gentleman. NOTHING BUT HOPE AND PASSION met the relaxed lad for a chat in his current hometown Berlin. Read what he has to say about the upcoming record, his past encounters with big celebrities and why he isn’t afraid of crying during old Disney movies.

The term ‘Hard Believer’ means somebody who is difficult to persuade, who requires proof.’ This is what you say about the title of your new Album. are you a hard believer?
I really should have anticipated that question but I havent been asked that yet! Am I a hard believer? Ehm.. used to be! I used to think that my beliefs are set – When I was 18, I knew everything, when I was 24, I knew everything, and when I was 30, I knew everything. Now, my career has changed so much in my life, in really cool and interesting ways, and I’m much more open than I used to be.

It was your label Ninja Tune that in 2006 insisted that you commit to be a singer/songwriter instead of continuing to make electronic music. How did you experience that change, to suddenly release something completely different?
I don’t actually know why you put your music out, but thats what you do, and you want to do gigs and want to tour. But I guess a true artist would never release a record, they would just make it and listen to it privately. When you put it out there you put it out there for judgement in a way. I don’t watch the promos, I don’t listen to the sessions. I dont want to judge myself anymore. It will happen anyway. The only crazy thing is that in the internet age, all that stuff is permanent. You do a radio session in 2006, and it is still online right now.

But you even have a photo diary where you upload photos, thoughts and experiences about Berlin, where you live at the moment.
They make me do that! Actually I’m too busy collecting memories – not taking pictures. Sometimes if you go to a gig, you see people holding up their iPads and it’s almost like they are trained to enjoy things through the screen only. I can relate to it in a little way, but I rather absorb the memories instead of having some crappy picture. So I dont have time to write a diary, I am too busy living it. Also I cant do an instagram every day with what Im having for breakfast. But once a month I do take pictures of stuff and once every couple week I get: ‘Dude, come on, do some instagram, blog, social media, something!’

Your music and lyrics became more and more personal with the years. Hard Believer is very serious, it deals with life’s twist and turns, and bittersweet experiences. What lead you into opening up this way?
A couple things actually. Electronic music was very different when I was doing it. It was not about personality. It is a lot about the scene and the genre. You wouldnt have a press shot to put your photo on the record – So shameful, you’d be such a sellout! You wouldn’t use your own name – like DAVID GUETTA or something. It was a faceless imagery, blank covers. I soon realized that the most unique piece of equipment you have in the studio is yourself. And in the quest of being different and unique as an artist, you kind of have to put more of you into stuff. More truth, more realness. So for first three albums I did, I put my photo on the record. Not because Im a maniac or because I wanted to get laid. But just because I wanted to say: This isn’t just a construct, or an item you buy on iTunes. This music is about me.

Nevertheless, the first single of the album, ‘Looking Too Closely’, advises someone not to look too closely for the truth in order to prevent pain. Should we close our eyes to reality?
Are YOU looking too closely? Yeah, you absolutely nailed it. It is about the relationship you have with yourself. About NOT looking too closely. Sometimes it is best to do it this way to remain positive. You can be obsessed with details. Like everybodies own posession of what they look like in the mirror naked. Its SO different to what they actually look like.

Yeah, and everyone has a mirror face. What’s your mirror face?
(strokes his beard) probably like this? The thinker. My appartement in Berlin is so fucking hipster, its completely empty like a giant warehouse. In my trendy hipster appartement there is no mirrors, because Christian, my patron in Berlin where I live, he doesnt need mirrors. He just gets out of bed and looks awesome. The only mirror is in the lift, and the lightning there is so brutal. Sometimes when you get into the lift, you’re like ..’oh shit’. 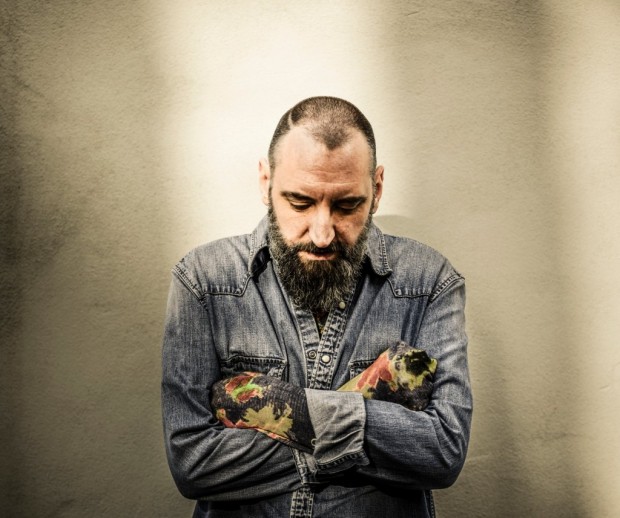 Imperfection can still be a good thing. You decided to record ‘Hard Believer’ in only 17 days.
That was really fast. It’s great, you get to capture a moment and you can not ruin it, overthink it, overcook it, burn it. You do all the writing, all the arguments ,all the ‘fuck you, I’m out of here, I’m done, I quit’, at home, where its not costing 1000 Dollars a day. And then, there is a specific feeling that we all have when we know that we can go. We were really excited about it, we loved all the songs. It can never be perfect. Perfect sucks really. Its what ‘they’ do, the others.

The ATOMIC KITTENS of this world?
Ha! Funny story, I once worked for a record company, and above it was their record company. I met them a couple of times. Our record company was super trendy. We had KINGS OF CONVENIENCE, ERLEND ØYE, a total hipster label. Above us was one of these super huge pop labels with BLUE and ATOMIC KITTEN. They’d have to walk through our office to get to theirs. And we felt so hardcore and trendy when we saw them. But some of them even are punks inside. I mean someone like ROBBIE WILLIAMS, you could never imagine him in a boy band. But he was. In the probably cheesiest modified engeneered boyband of the 90’s.

Now you even have your own label – Hard Believer is the first album to be released on the R’COUP’D imprint. What can we expect from this in the future?
Yeah – Fink doesn’t really fit on Ninja Tunes anymore, it never did but now it really doesn’t. They are much more like ACTRESS and electronicy stuff and KELIS than us. But now, me and my Manager have R’COUP’D. The artists Im looking at are very interesting. They will probably not sell a lot, but they are really cool. Best thing is, I can help artists to be happy. A happy artist is someone who is creative wo is productive – and being on the right label is part of it. I wouldnt be doing this if I wasnt in a good place myself. This is my seventh album as Fink in 8 years. I’m realizing that its a real achievement to do what you love for a living. That should be enough. An artist is about self-indulgance and interesting personal history – This Art-or-nothing, This-song-is-more-important-than-anything, now-I’m-not-going-home- kind of thing.

So it’s all about hope and passion?
That’s what you need. Hope is a weird one. Its almost like wishing. Passion is crucial. It should be all about that. When proper artists talk about performance in studios like ‘I need to perform this song today really well’, that is just a professional way of saying ‘I really need to give a shit today’. The passion to nail the take you need to nail should be pure intensity. So much so, that it can be difficult to do it – because of the emotion youre putting in. You know, it’s not unusual that I fucking start crying. If a take is a good one, than you probably will be a little bit emotional at the end because you really went there.

I will tell this to all of my friends that laugh at me when I cry at gigs.
I cry at movies and gigs all the time! My problem is: I cry when I’m happy, too. Its a bummer. I cry on the plane. I cry at the cinema. Especially Disney movies, man. The Lion King, I mean, come on! Even Finding Nemo. They don’t even need 90 seconds and youre crying through that whole fucking movie.