What Is Love? Get Well Soon’s Konstantin Gropper on the mother of all questions

Love, love, love. It comes in all shapes and forms. Plus, it’s a crucial part of the whole history of pop music. Now, German indie pop outfit GET WELL SOON is about to add another chapter to it. In their case, love comes in the form of a whole new album circling around the theme of all themes. Well, the band’s mastermind is a strong believer in the album concept, as we found out in earlier chats, and he’s never been shy to touch the really big ones.

It’s been a while since we’ve been able to listen to a full album of Konstantin Gropper – his latest works consisted of three individual EPs – but on January 29th, the new record Love is finally out. After teasing us with a Udo Kier-starring video to his current single This Is Love that revealed a somewhat twisted approach on the whole ‘love’-thing, we actually wondered where this new record is going for. So we did the only thing possible and sat down with Konstantin Gropper to chat a little about the album’s concept and inspiration, German music in general and if you actually need to study music to write a good pop song.

Your new album got such a universal name. Why did you decide on the theme ‘love’ and why now?

Konstantin Gropper: Good question. Love just basically came to me and I can’t really say ‘why now’ exactly. Maybe it’s a kind of a society thing or a more personal thing but for some reason it was kind of obvious to me. It wasn’t really a conscious decision, but more of an emotional decision, to go with love.

For Konstantin Gropper love is mainly a mess…

So is love really the only theme throughout the album or do you have any other topics you address and can tell us about?

KG: The album has a few song titles that start with ‘It’s’ and these are the songs I was trying to find either an explanation or just a picture for love. So maybe it’s like a maze or labyrinth. Is that a good metaphor for love? Or is it a fog? It’s a mess, that’s definitely true. In the end I just sing about how riddled the whole thing is.

When you released your debut record, which is now already seven years ago, the press were like: ‘he’s the German Wunderkind of indie-pop and now we finally have someone with international flair in the industry’. Did you feel a lot of pressure back then? And did you manage to move away from that pressure over the years?

KG: Yeah, I think so. Hm, I mean there wasn’t that much pressure… I was just really happy that it happened. That we were able to do tours outside of Germany and that the press outside Germany were supporting and interested. And hopefully still is! Fingers crossed. (laughs) 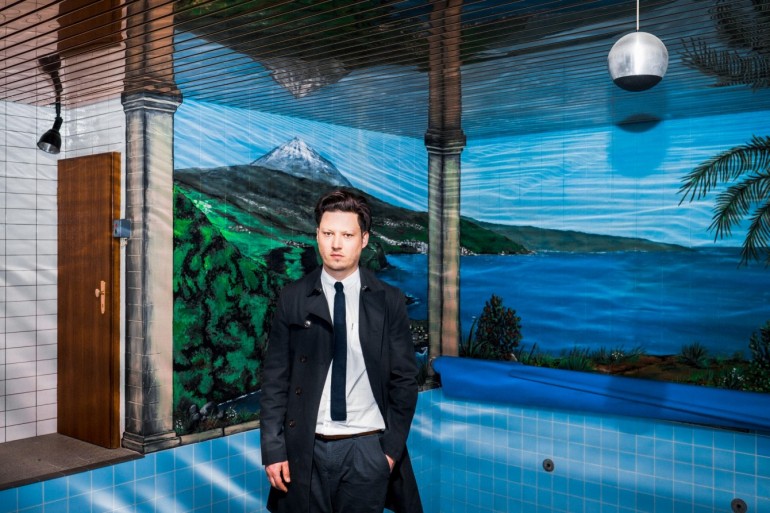 As GET WELL SOON almost instantly evolved from a one man bedroom project into one of international calibre back in 2006, it kind of seemed at first as if Gropper skipped the German market, which would have been the usual way (or maybe he was lucky enough to be able to skip that). Still, the creative core of the band remained here in Germany all through the following years. Probably, Gropper and his project have become a good example of the flaws of ‘Germanness’: Always on the verge of reaching out and caving in.

So, the question is a pretty obvious one: Would he ever consider making an album that reflects Germany and that would introduce the country to the world?

KG: It would be interesting but I’m not sure how that would sound like. It’s tough. I mean there is German ‘VolksMusik’ and that is in a way interesting. But I don’t know if that’s inspiring to me? Interestingly enough, when the debut album came out, people said – as a compliment – ‘he doesn’t sound German’. And now it comes back to the topic that for instance, the album cover is really German. It’s actually an Austrian painting by the way (grins). The whole romantic era is ‘German’. I mean I’m at peace being German but I don’t think I want to be the ambassador for German music.

There’s never been an urgency inside you to maybe write a song in German?

KG: Well, no urge…Like I’ve tried writing in German and have done a theater production two years ago, and have written the songs for that in German, but I didn’t have to sing them myself so that was okay.

Indeed, Gropper’s work has lately been diversified massively. He composed scores for films and plays, produced Hip-Hop records and pursued his passion of doing cover versions. It’s not just talent though, that enables him to do these several works. It’s also education, as he once attended the Popakademie in Mannheim, a German university solely for ambitious pop musicians, producers and promoters. And indeed, listening to this latest record, Love, there’s a lot more straight pop going on once again. But is it even possible to learn how to write a pop song? Or is that something that comes from within?

‘I’ve never really thought about it: how to write a song. At some point I just started to do it. I could explain how I do it. And you can teach the basics to someone like ‘these are the chords that fit together in a pleasing way’. But the whole magic about the whole thing isn’t something you can teach – well I hope you can’t. But maybe it’s more generic than you think…’ (Konstantin Gropper)

Okay, so you don’t really sit down and decide to write a pop song. But are there specific artists that kind of help you get inspired when you’ve got a little writer’s block?

KG: (laughs) I’m not going to pretend that I’m not looking for inspiration in other music. What I used to do is look outside of pop and look for inspiration there. This time, I’ve just really rediscovered pop for myself again and listened to a lot of pop music, so with that in mind, I made this album. The last album was really inspired by soundtracks and film music and Italian music. This one is now directly inspired by pop music. Maybe one more thing: I never listen to any current stuff when I write music. It’s more TOM PETTY, R.E.M, FLEETWOORD MAC.

Have you got any final words for all those out there waiting for the album and excited for the tour?

KG: Hmm, well I hope that everyone notices that the album is different to what I’ve done before. That’s probably the best you can ask for, as an artist. Not to bore people. (laughs)

Without giving too much away: GET WELL SOON succeeded in redefining themselves once again. Love is out January 29th via Caroline International and the band will hit the road promoting it pretty soon. See below for a list of the dates confirmed so far.