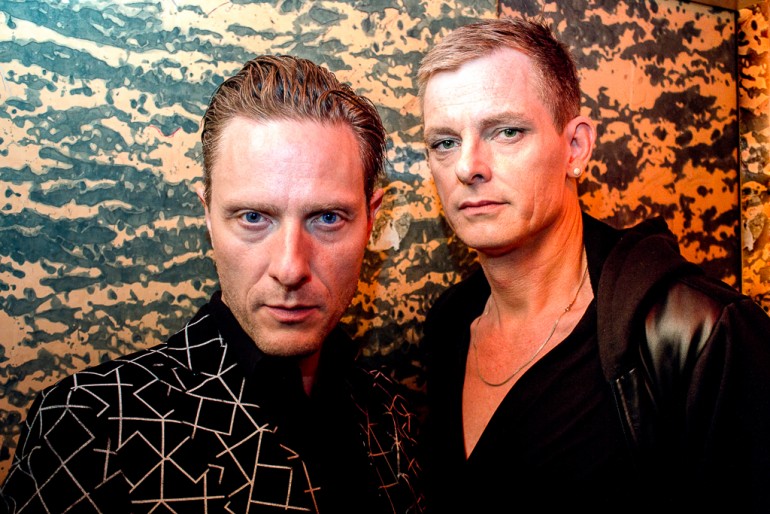 Iceland’s GUS GUS have been one of the rare constants in Europe’s ever changing dance music scene. The collective from Reykjavík has been around for two decades now and has become a live institution for many die-hard fans. A GUS GUS performance always is a pumping and energetic experience, one that celebrates the unifying character of dance music and the beauty of the rave concept if you’d like to call it that way. While the line-up of the group constantly changed over the past years the musical output of the group remained on a constantly high level. The band’s ninth studio album Mexico was released back in 2014.

As the world is celebrating 20 years of GUS GUS this year NOTHING BUT HOPE AND PASSION took the chance for a quick chat with the remaining founding members Birgir ‘Biggi’ Þórarinsson and Daniel Ágúst Haraldsson to look back on the group’s history, the whole buzz around the Icelandic music scene and why they don’t waste any thoughts on retirement right now.

You established yourselves as an avant-garde film and acting collective before venturing into electronic music. What spurred you to do so?
Biggi: We got a fax that changed our lives and our perspectives. We started out as a group doing short films and it was a collection of different people from different areas of music in Iceland coming together. I’m not sure if it was intended to do something; we just kind of realized. Daniel was a part of this…
Daniel: The directors were interested in us as characters and it so happened that we were musicians as well. Singers, songwriters, the lot. After we were included for the film, one of the directors and I had…
Biggi: Siggi…
Daniel: Siggi (Kjartansson) had this idea to make some music. I intended to move into electronic music myself, having been in a standard rock band, so this was a venture that was half planned… and half destiny.
Biggi: I just got a call from Stefán (Ámi), who was one of my childhood friends. Like Daniel was saying, they wanted to do something electronica and they were searching for people to join them as they were singers and actors, not producers. When Stefán visited me, I made a couple of songs and showed it to him. He asked me: ‘Do you want to do pop music? Do you like it?’ And I said yes. I was in a band called T-World with my friend Maggi Lego before we joined GUS GUS. There wasn’t any plan; we just wanted to take part. Everyone knew Daniel, he was this big star, he has this wonderful voice and we wanted to make pop music. So this whole thing was an experiment for us. First the album, then we did a couple of concerts… then we got the fax.

I find it really appropriate that you guys got signed by 4AD because the whole avant-garde thing that they’ve been curating…
Biggi: When we got the fax from 4AD to release this album worldwide, we met up and thought: ‘Okay… do we want to be a band?’ and we decided to. At that time, Emilíana (Torrini) said that she wanted to do something else, and she was not part of the group that made the band. Some of the gang decided to be GUS GUS… and you can say that from that point on, even though there was talk about doing something more visual, the focus was basically the band.

‘You just go out and do stuff’

How did it transit from an initial focus from visual to aural?
Biggi: Basically Siggi and Stefán were film directors and were part of the group, Siggi was a writer and also not interested in producing, Stefán was not in music at all. Their main focus was visual work, and when we became a band, we decided the visual side was important, I guess.

The Icelandic music industry has been picking up lately, with bands like SIGUR RÓS and OF MONSTERS AND MEN, SÓLEY and MÚM establishing themselves as international acts. What do you feel are the major changes with regards to the atmosphere and reception to Icelandic music back then as compared to now?
Biggi: The mentality of Icelanders has been been very creative. You could definitely see the impact when the punk scene emerged in the early 80s – about ’81, ’82. There was a huge punk scene and it established the attitude and capability of being creative without knowing anything. You just go out and do stuff.

Was it influenced by the United Kingdom?
Biggi: Yes of course. THE SUGARCUBES basically broke the ice and got famous, then of course BJÖRK did her thing and became super famous… after that was our small success, then SIGUR RÓS shortly after, and the rappers who got big in Japan…
Daniel: QUARASHI.

It’s so weird that Icelandic music would be an influence on Japanese rap…
Biggi: It proved to the creative crowd in Iceland that this is something definitely possible. The people who are involved in the music scene felt that they could go globally if they wanted to. They set their goals higher. 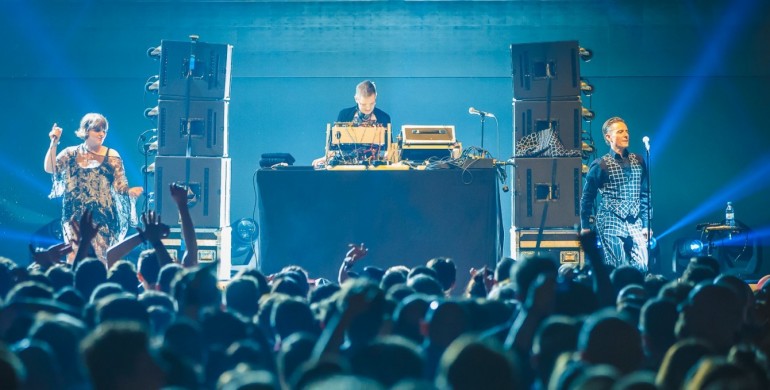 I want to talk about your aesthetic as well – when you started GUS GUS, the internet was at its infancy; you took about a decade to cultivate it. With the world wide web you can do it overnight now. Could you take me through your creative process?
Daniel: The visual aspect for us has always been really important. The aesthetics have grown and developed with the people that we’ve been working with. It comes with collaboration and also our own directors. Working with them and their contribution to the live show has been fantastic. Half of the show is based on ‘What do you come to see?’ and we wanted to make an impact with visually appealing things along with our music. That’s how GUS GUS has always worked.
Biggi: On the musical side, there has never been any grand vision. It’s just ‘what do we want to do next?’ And that has been influenced by the changes in the band. We did the first album, and then everybody left, and we were ‘what are we going to do now?’ Then we had Earth come in, and we did two albums with her and she left and she came back again. It forced the band to constantly explore and reinventing itself.

Do you feel frustrated to not have a fixed plan?
Biggi: Fixed is boring. It’s daft.
Daniel: There’s always a risk of stagnation.
Biggi: This comes with a want for something new. I don’t know if people feel or sense it in our music but that’s the drive for me. After an album, a void follows. Then we get Earth back to do something new. Even though it’s not very far from what we’ve been doing but there’re definitely new angles to explore.

It is a very vulnerable state to be in because we’re not quite sure what’s going to happen or what we’re capable of this time round.
Biggi: I can name a couple of examples. After we did the first two albums with a big lineup… A band is like many different people coming together. Like THE BEATLES – Paul McCartney coming in with his tape loops and and this guy with a sitar… everybody comes in with their goals in mind and we explore it together. From my perspective I wanted to try out the early 80s influence and it got mixed with the house sound that developed in the late 80s early 90s. Maybe that was the influence that I was asserting on the Forever album. After that, I was curious about the German techno that evolved in 2004. It was groovy, melodic and so beautiful. So we went in that direction when we did 24/7.

And on ‘Arabian Horse’ it was really minimal.
Biggi: Exactly. The plan was to have big chord structures to create a trance vibe in my mind.

You guys have been around two decades. Most of the people in the audience are in their late twenties to early thirties…
Biggi: It’s mixed. When we did Arabian Horse, it went really well with the young crowd, especially in Eastern Europe. When we were touring, we had the young kids showing up…
Daniel: We’re delivering something that relates to everyone.
Biggi: I’ve never felt that age equates to experience. Our approach to music has always been timeless. We grow along with it as new genres develop. It’s never been about what’s hot today; it’s always what we want to do. It’s been influenced by electronic music from all over, and we want to make the same impact on ‘all over’ like how it has inspired us.