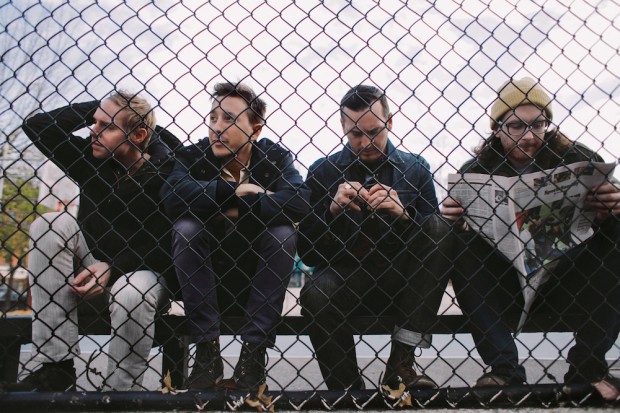 Connecticut’s arts college Wesleyan University is one of those places that has a shining career in store for many of its alumni. MGMT, SANTIGOLD and AMANDA PALMER are just a few of them. An encounter at Wesleyan also was the start of the band BEAR HANDS. Founding members Dylan Rau and Ted Feldman met there as film students but chose the musical path after deciding to start a band in 2006. With drummer TJ Orscher and bass player Val Loper they recorded an EP in 2007 and released their debut Burning Bush Supper Club in 2010.

The band admits that they had a complicated time after that, including problems with money, their label and their relationships and distractions like internet, drinking and reality TV. Fortunately they’ve overcome their apathy and took the production of the new record in their hands. Now Distraction is available in America and Canada and on August 8 it will be released in Germany and on the 11th the UK.

NOTHING BUT HOPE AND PASSION sat down with Ted Feldman and Val Loper to talk about the new longplayer, good books and second honeymoons.

I’ve read the title of the album is inspired by the novel ‘Chronic City’ by Jonathan Lethem.
Ted: Kind of. I love this book. It’s about a guy from New York, who is a former child actor. He doesn’t have to do anything. His girlfriend is stuck in a space station, he hangs out with some bizarre characters and there are second universes. I think there were parallels with what was going on with us. In our time, the internet age, people are distracted and willing to be lead around by the government or the vices or whatever.

Are there other books that have impressed you?
T: I’ve just read A Confederacy of Dunces. It’s about some awful people in New Orleans.
Val: I’m reading it right now. John Kennedy Toole wrote it in the sixties. He committed suicide because he couldn’t get it published. After his dead, his mother sent the book to a bunch of publishers. One fell in love with it and it became a cult classic.

Is one of you a reptile lover? Because there is this iguana in the video for Agora.
T: I put the reptile in the video as a tribute to the remake of the film Bad Lieutenant. It takes place in New Orleans and Nicolas Cage plays a horrible cop. He is smoking crack and there are these weird shoots of an iguana, that he only sees.

Many songs, like ‘Agora’ and ‘Vile Iowa‘, are pretty personal. Can you tell me more about that?
T: The lyrics of Vile Iowa are about Dylan’s ex girlfriend who was from Iowa. He had a bad experience meeting her parents. They didn’t like him.
V: Parents don’t like Dylan.

Why?
T: Have you met him? (laughs) We love him but parents get a little nervous. He is fidgety. Agora is about not leaving the house. Dylan doesn’t really have agoraphobia but he spent a lot of time in his apartment.

Are you guys afraid of something?
V: I am afraid of flying. I hate flying. Every time a plane takes off, I almost have a panic attack. My biggest fear is a plane crash into the ocean at night in shark infested waters.
T: Failure probably.
V: Oh shut the fuck up! (laughs)

Well, as a musician the chance to fail is very high. What did your parents say when you decided to work as musicians?
V: Good luck.
T: My parents are very supportive but it was not their ambition for me.

What was their ambition?
V: Male stripper.
T: Basketball star. (both laugh)