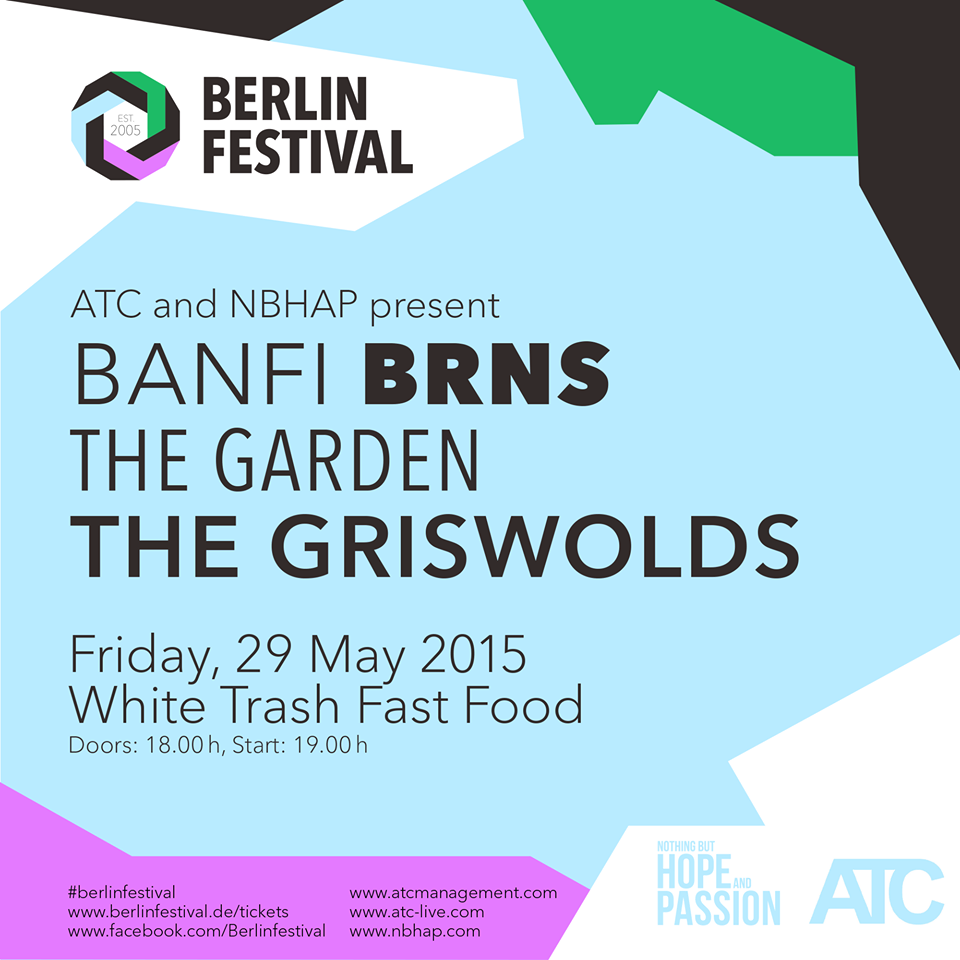 Alright folks, the date is approaching and as you might recall, the BERLIN FESTIVAL returns for a whole new event experience in 2015. Now officially located in the Arena Park in the German capital the event will start the festival season on the weekend from May 29 to 31, featuring a line-up that will please all lovers of contemporary and classic electronic beats. The headliners include Berlin’s very own FRITZ KALKBRENNER, the almighty JAMES BLAKE, RÓISÍN MURPHY and legendary British dance duo UNDERWORLD, .

Besides great names the BERLIN FESTIVAL will also feature plenty of interesting cooperations and concepts within the musical microcosm of the event. For the first time ever, NOTHING BUT HOPE AND PASSION will host a NBHAP Special together with ATC at the stage of the White Trash venue on the evening of May 29, featuring performances of the highly recommendable up and coming acts BRNS, THE GARDEN, THE GRISWOLDS and BANFI. In order to prepare you for that special night we would like to introduce you to those acts from all over the world that’ll gather on the stage of the White Trash on May 29th. Read on, get to know the bands and their music and when you’re done, then there’s maybe also the possibility for you to win a few tickets for the BERLIN FESTIVAL as well. Isn’t that something?

BANFI from London might sound unfamiliar to some ears but essentially it’s the new band project of the songwriter JOE BANFI who has been around for quite a while now, especially in the UK. After spending some years experimenting with his sound, proving himself on countless Open Mic Nights and putting out some EPs, JOE BANFI ultimately ended up in creating a quite distinct, new thing, compared to his former sound with his new band BANFI. It’s like a far more upbeat, but vocally and songwriting-wise still essential BANFI project. His first single Where We Part is promising enough to be excited about his appearance in Berlin.

Oh my, where did all the vowels go. Here’s yet another example of google-optimizied bandnames: BRNS (BRAINS) is an energetic four-piece from Belgium that has been on tour with BALTHAZAR recently and they actually do put on a really wild and exciting live performance. Rich in detail and multi-structured, their songs are heavy on percussion and build up to anthemic heights. The four-piece debuted with a strong Wounded-EP in 2012 and ultimately also released their first full-length Patine in late 2014. Prepare for some complex indie rock with a nod towards WOLF PARADE & Co.

These lads from Orange County, California call themselves a conceptual punk band and, how nice of them, to make it easier for us journalists, they even created their own genre on the way: Vada, Vada. According to the funding member Wyatt Shears it’s ‘an idea that represents pure creative expression, that disregards all previously made genres and ideals.’ Sounds pretty similar to the original definition of punk to me but hey, Vada Vada is a much more elaborate, new tag, isn’t it? THE GARDEN has been established in 2011 by twin brothers Wyatt and Fletcher Shears and their sound, although just made up of bass and drums, is indeed rather unpredictable. So shall be their live-shows. Reason enough to look forward to THE GARDEN‘s set.

Be Impressive is more than just the title of THE GRISWOLDS debut record from last year, it’s their mantra as a band. After the success of the Heart of a Lion EP the four-piece from Down Under established a sound that they themselves describe as one ‘that’ll break and mend your heart, have you dancing with joy. It’s the hedonistic island paradise that’s an escape from all of your worries.’ And indeed, this is the kind of sunny, dance-along pop music, all set up with big chorusses and tropic guitars, that simply creates an irresistible vibe. It’s a long way from Sydney to Berlin but we’re still pretty sure that THE GRISWOLDS won’t put on a lazy, tired show.

Did we give you enough arguments to attend? You want the tickets as well? For the whole BERLIN FESTIVAL? Well, what a coincidence that we’re giving away 1×2 tickets for the forthcoming event. Just write us a mail to win@nbhap.com, the subject ‘Berlin Festival’ tell us your full name and with a bit luck you’re going to be part of the event. The competition runs till May 20. Good luck, everybody!

THE GARDEN
THE GRISWOLDS