Thrust into the spotlight two months before its planned release date because of an online leak, BJÖRK’s ninth album, Vulnicura exhibits an emotional journey from heartbreak to healing. The leak was an aptly dramatic introduction for such a striking record. In stark contrast to her eighth studio album, Biophilia, accompanied by its own app for the listener to engage with and manipulate every track, Vulnicura is stripped down and personal to the artist herself. When considering her two latest albums, BJÖRK conceded to an interview in Pitchfork that, ‘[For Vulnicura] I couldn’t put any of that stuff on top of it, because it has to be what it is.’ If this was her ultimate intention, that her album ‘be what it is’, it has been achieved to the fullest. From start to finish, the deeply touching pieces exhibit a vulnerability never-before heard in her work. Vulnicura exposes the Icelandic singer as both the artist we know and the human about whom we learn.

While Biophilia’s accompanying app attempted to engage our bodies, the sheer intensity of Vulnicura’s sound engages our emotions. BJÖRK employs her signature, fragmented sound to guide us through a journey from fragmentation to new beginnings. Her synth trembles within the album’s first few songs, such as History of Touches, while it stumbling over lyrics of lost intimacy. It is in this track that she concludes her love affair before she forces the listener into the despair of Black Lake. This long, despondent piece employs melancholic lyrics over a string harmony to brood upon the confused ending to a relationship: ‘Did I love you too much? Devotion and re-broken.’ 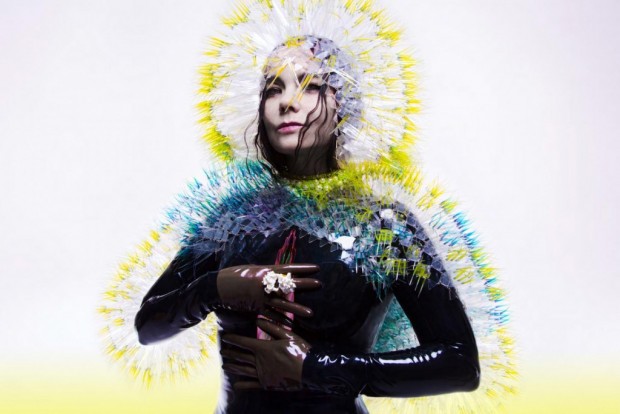 As the sentiment of the album shifts and develops, so does BJÖRK’s choice of instruments. She meticulously balances classical strings and electronic synths to interweave raw, fluctuating emotion within a continuous, musical style. Passions that may, in the hands of a lesser artist, have become a heap of incoherent feeling, are guided through a clear but fascinating narrative when BJÖRK is at the helm. Atom Dance exacts a pacier, rhythmical beat that sees the lyrics out of melancholia into new potential. ‘Enter pain and dance with me,’ demands BJÖRK, as she embraces her prior depression. She brings in the male vocals of Antony Hegarty, inviting others into her newfound solace. As their dynamically different voices reverberate off each other, Hegarty and the Icelandic singer illustrate a willingness to, once again, find feeling among others.

In the album’s conclusion, Quicksand acknowledges how BJÖRK’s use of distortion contributes to her own expression. It is at her most fragmented moments that BJÖRK exhibits her most unique artistry. ‘When I am broken, I am whole’, she declares for her listener. An album that feeds upon disjunction exhibits integrity of sound that many artists couldn’t find while simultaneously expressing such a range of sentiment.

From the educative, considered work of Biophilia, BJÖRK demonstrates the same intelligent creativity within Vulnicura but, this time, the subject is personal. The elusive artist exposes her listeners to anguish and, in response, we go beyond mere sympathy for the music to truly empathise with the range of emotions depicted. Vulnicura is as tumultuously cathartic as some great tragedies, but, this time, exhibits a glimmer of hope. BJÖRK’s pensive exploration of the psyche forces listeners to reflect upon themselves. An artist so deeply engaged with her own experimentation manages to make us consider a very private process. BJÖRK refuses to articulate clear causes and conclusions to her distress but, instead, holds our hand as we experience it through her music.

BJÖRK continues her evident talent from other albums on ‘Vulnicura’ but, also exposes a real personal depth which makes the record truly brilliant.