Bring The Mourning On – ‘Northern Ghost’ 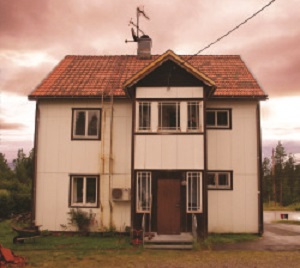 BRING THE MOURNING ON – Northern Ghost

Maybe it’s already a bit worn out but melancholy still seems to be a great driving force behind creativity. With their third record in four years, the Swedish foursome BRING THE MOURNING ON definitely align with that notion. On their way from Going, Going Gone over Ukiah to the now finshed Northern Ghost, they developed a specific sound between alt-country-vibes in the legacy of JASON MOLINA and 90s slowcore-minimalism. All in all an undoubtedly heavy mixture that’s hard to devour – but it is honest and it becomes more and more secure in the field of unyielding sadness.

Produced in exactly that house in Umeå we see on the cover, Northern Ghost brings ten songs between calm acoustic picking, the aforementioned alt-country elements, self-forgetful rhodes-melody and some more exotic folkie-tools like the saw or an accordion in the opener Cut. Above all, of course, sits the singing couple of Henning Petersson and Erika Axelsson, ready to squeeze the laughter out of our hearts. A narrative dialectic that is both quite predictable and of compelling urgency. Especially the voice of Petersson is reminiscent of that unique kind of calm expressiveness that makes lyrics really haunting instead of just preposterous. Armed with that, BRING THE MOURNING ON fight their way through some of their most depressing songs. With lengths of 7 and nearly 13 minutes in the case of the album’s closer 97,7%, that can be a rather challenging experience. But as everyone who’s into this kind of music knows: the way is the goal. And the way leads through the mist. Therefore: the mist is the goal.

It is significant that, especially with 97,7%, BRING THE MOURNING ON might have written some of their best song to date. Their former country-approach makes room for the one of some 90s slowcore-institutions like RED HOUSE PAINTERS, IDAHO, LOW…you name it. Fortunately, the Swedes do very well in honouring all of those, instead of just copying them. Needless to say: that makes Northern Ghost an album hardly imaginable among cheered-up crowds. You better take this one with you and disappear in the woods. There you might be able to redefine your highly subjective sense of what’s to be done and get rid of all that you’re supposed to be doing. Truly, an album that could emerge those kind of feelings is a rather rare achievement.

With some of their best songs to date, Bring The Mourning On develop their sound on Northern Ghost into slowcore-regions – for fans of the classics definitely a good choice.

BRING THE MOURNING ON