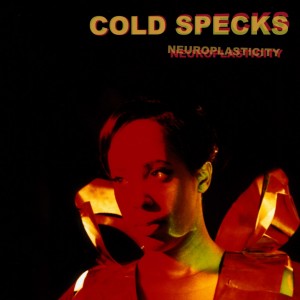 Neuroplasticity is the process by which it is thought human brains learn and adjust to new situations. After three secluded months in a cottage in Wick, Somerset, COLD SPECKS had to realign her ideas before she could start to produce the songs in Canada. Once again the 26-year old challenges the listener with cryptic half-religious, half-fatalistic lyrics. Bible quotes like ‘Death is swallowed up in victory’ (Exit Plan) stand next to elemental symbols like blood, water or animals and spooky allusions.

Whose is the gloomy baritone on ‘Exit Plan’ and ‘A Season of Doubt’?

It belongs to SWANS founder Michael Gira. COLD SPECKS provided vocals for a song of the recent SWANS album To Be Kind. In combination with the dry and ghostly playing of jazz trumpeter Ambrose Akinmusire, A Season of Doubt develops an ominous suction, ending with the line ‘I’ve got an unrelenting desire to fall apart’.

Where has the graceful expulsion led?

COLD SPECKS has courageously left her remote goth-gospel-cliff and moved forward to a broader place, leaving space for electronic experiments, synthesizers, accentuated trumpets and powerful percussions. Songs like Absisto and Bodies at Bay show a more upbeat side of the singer and stand out due to rhythmic imaginativeness and accomplished arrangements. Still it’s Al Spx’s voice that dominates the songs and touches the heart directly.

With ‘Neuroplasticity’ COLD SPECKS continues the way through her haunted world, but this time rays of light fall on her apocalyptic sound-paintings.