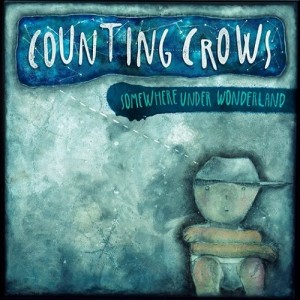 If you suffer, like Adam Duritz, from Dissociative Disorder, the ‘normal’ world seems like a wonderland to you. Somewhere Under Wonderland is where all the scarecrows, earthquake drivers and tragic national heroes gather and try to fix their broken biographies. Duritz emphatically turns their stories into poetry. The singer, who recently turned 50, still sounds like the tormented thirty-something he was at the successful start of COUNTING CROWS back in the nineties.

Swan song for the promises of youth

The lead single Palisades Park, part jazz-nostalgia, part old-school-rock, tells the story of two friends, one of them is a cross-dresser. The painful and mystic time of youth is embodied trough the up and down of the roller-coasters of the former amusement park in New Jersey. ‘And you carry that spark from Palisades Park / Down over the cliffs and out into the dark / It’s a long life / Full of long nights / But it’s not what I was looking for’

Solid and yet intangible

Musically the record is more cheerful than the usual COUNTING CROWS output. There are mostly uplifting rock-tunes like Earthquake Driver, a country piece (Cover Up the Sun) and a melancholic leaving-home-song (God of Ocean Tides). The LP works as a whole but, apart from the touching ballad Possibility Days, the songs don’t really linger in the memory and leave the listener undecided and often untouched because of their vagueness.

COUNTING CROWS‘ melancholic-romantic stories are still fascinating, but the background music of ‘Somewhere Under Wonderland’ lacks the crazy hunger, that made us feel for all the tragic figures of the past albums.