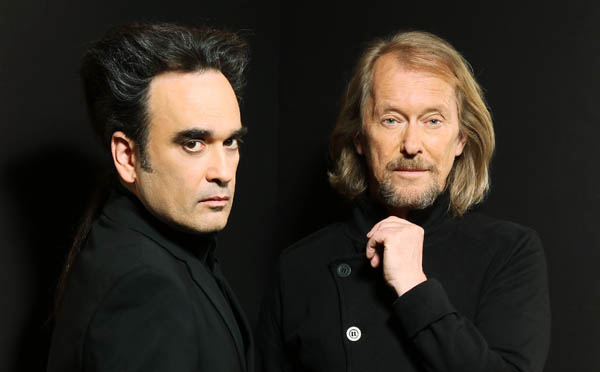 The goth scene is burdened with clichés. Some think of cemetery music and pale people with death wishes others might even think of occult rituals and sacrificed animals. The best way to do away with those prejudices is to visit a place where those ‘scary’ people gather, for instance a concert of the German electro / dark wave band DEINE LAKAIEN. Okay, black still is the fashionable colour and there was a remarkable amount of patent leather and lace gowns. But no sign of beheaded bats or units of stored blood when singer Alexander Veljanov and synthesizer expert Ernst Horn entered the stage together with Yugoslavian musician Slobodan Kajkut, who supported them on the drums, and Goran Trajkoski (electric guitar), who comes, like Veljanov, from Macedonia.

Colour-Ize, the opener of their 1986 debut, also opened the show. With a great version of Reincarnation from their second record Dark Star the journey to the past went on and continued among others with songs of their most successful record Kasmodiah (1999): the painfully wonderful Return and Into My Arms with its gloomy lines ‘Like a rising monster / All veiled in grey / See the walls of dawn / They warn you of the day’.

There is no doubt, DEINE LAKAIEN make ‘dark’ music. But the vault we descended with them was lined with Veljanov’s velvet black baritone, there might have been some instruments of torture gleaming in the distance, but all in all the nightly trip was rather romantic than threatening. Of all those people dressed in black, Veljanov probably was the one who took himself least seriously. When he didn’t sing, he elegantly danced to Ernst Horn’s ingenious soundscapes, between the songs he acted like a presenter, guiding through the programme or passing ironic comments like: ‘How was the church?’ and ‘Berlin, you are really going crazy’, regarding the pretty lethargic audience (almost no raised hands, not even devil horns). When the band played a brilliant final of the fast-paced Overpaid, pounding on their instruments, it took a while until the people understood Veljanov’s signals to join in the last line ‘Influence my will’.

At least the project’s new album Crystal Palace influenced the fans – it sells quite well – and the new material worked well onstage, for instance the power-pop piece The Ride and the longing Farewell, which ended the main set. Of course the band came back to give encores and suddenly the audience woke up. When DEINE LAKAIEN stroke up the baroque avant-garde Crystal Palace, the crowd began to sway and when they played the stomper Dark Star, some people even danced – which obviously means pure euphoria in goth circles. After the third encore the band finally closed their crystal palace and the team from the sound guys to the female trucker, a kind gesture that showed all the amateur sociologists how ‘those goths’ really are: polite, guarded, refined.