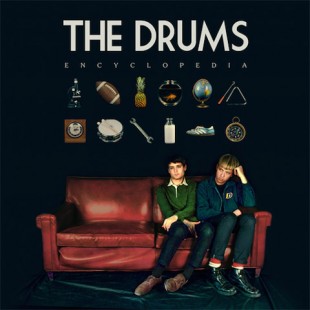 Four years have been passed since the release of THE DRUMS self-titled debut record, three years since their second LP Portamento which almost followed it’s predecessor fluently. They didn’t really take a break in between these two records, so they took a long one before releasing the third one Encyclopedia. And that has been the right decision- Encyclopedia seems to be a lot more elaborated and mature then their other records – although there’s only the two founding members Jonathan Pierce and Jacob Graham left.

There is a lot going on on Encyclopedia: the strong and powerful, kind of punkish opener Magic Mountain which makes you want to go in there with them, the cheerful and poppy Kiss Me Again which reminds a bit of Let’s Go Surfing rousing spirit or the rather sad Break My Heart which kind of  follows the manner of Down By The Water. In short, they deliver variety on a high level without losing the typical DRUMS-sound.

With maturity comes the deepness- at least in case of THE DRUMS. Encyclopedias lyrics are profound, dealing with religion, homosexuality and romance. Also the melodies kind of attach a certain deepness: thought-out guitar chords meet sophisticated electronic tunes and sonorous indie-tones.

With their third record ‘Encyclopedia’ THE DRUMS deliver an album full of changes, special moments and elaborated melodies without forgetting their unique spirit.