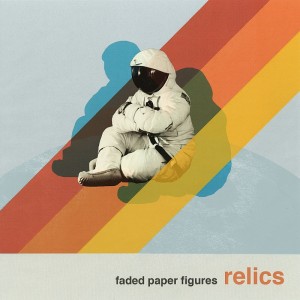 Okay, when we say FADED PAPER FIGURES sound like a videogame soundtrack, we mean it if BELLE AND SEBASTIAN teamed up with BRIAN ENO to soundtrack a game about hunting poppies in outer space. (So, we mean it in the nicest, most flattering way.) This fourth album from this L.A.-based synth pop trio grabbed our attention with the early release track Breathing. Breathing is about trying to understand death, within the framework of ancient Egypt (Sample lyrics: ‘no love escapes this necropolis’ and ‘so let it be, just come to me like jackals in the night.’)   Relics is a perfect marriage of tight controlled pop with synthesizer. Each song manages to be original and multi-layered, and songs morph unexpectedly, the effect is quite delightful. Unlike so much of the genre, the songs have real thoughtful lyrics backed up by skilled electronica: think of THE POSTAL SERVICE if they didn’t get annoying.  Thankfully, they aren’t just retreading where bands like ARCHITECTURE IN HELSINKI has gone before, but adding their own, darker strand.

The day jobs of the FADED PAPER FIGURES are pretty interesting: R. John Williams is an Assistant Professor of English at Yale University, Heather Alden is a doctor in residence and her husband/bandmate Kael Alden writes music for a production company (called Robot Repair).  This band is well-rounded, the diversity of their interests gives Relics plenty of fascinating edges. Not the End of the World (Even as We Know It) is a true fan’s tribute to R.E.M.’s It’s the End of the World As We Know It.

The track has the staccato lyrics reminiscent of the R.E.M. song, but it’s toned down and whispered, and FADED PAPER FIGURES has replaced the crashing guitar chorus of the original track with sweet, spacey keyboards. Spare Me brings back popping synths and features Heather on vocals, she has a voice that can switch between accusing and sweetly plying, like a braver FEIST.  Real Lies works in some fuzzed out keyboards, and wordplays with the lyric ‘Real lies, real lies, real lies/need your lies, need your lies’ over. The album closes with Forked Paths, a more contemplative, darker track that asks ‘Why should I never feel at home?’

‘Relics’, the excellent fourth album from FADED PAPER FIGURES, is ideal for fans of thoughtful and melodic synth pop.