Little Islands of Happiness – An Insight into Goa

A country road, somewhere in East Germany, 60 miles away from Berlin. Fields, a village, meadows. The street goes through a forest and suddenly a small green flag marks the destination. A bumpy path leads to a stubble field and to the entrance of the INDIAN SPIRIT – one of many Goa festivals that take place every summer in Germany.

On entering the festival area, that extends over a mowed meadow, it becomes clear that goa festivals are different to other festivals. There is security, but they don’t rummage through the bags in search of prohibited things and bottles. It is allowed to take beverages along, even alcohol in glass bottles. Even if some of the festival visitors look like fakirs who are able to run over broken glass, they don’t have to worry about about their feet. The ground is not only fragment-, but also rubbish-free.

Tattoo of the Sanskrit syllable Om – the Goa sign. (Photo by Friederike Bloch)

It looks like friendly hippie-aliens have landed in this wasteland and erected a camp of oversize flowers and mushrooms, tepees and colourful tissues. The September sun shines on the people who have gathered on the main dance floor. They wear ribbons and beads in their hair, dreadlocks, feathers, patchwork dresses and harem pants – old and young versions of Tarzan and Jane.

The bass booms out of the huge speakers. Four-four time and 140 beats per minute – the heartbeat of Goa music. There are also collages of atmospheric and psychedelic sounds and other electronic effects. A big blue owl watches over the exotic crowd, in its belly is the DJ desk. At the moment Ralf Dietze und Piet Kaempfer put their music on. For over ten years they travel all over the world and make music together under the name PROTONICA. After the show they wipe off the sweat and make time for talking about their job and the origins of Goa.

‘In the seventies and eighties the Indian state Goa was a meeting point for hippies from Europe. They played electronic music with analogue synthesizers at the beaches’, explains Ralf. ‘When they came back, they took this sound with them and organized the first underground parties and festivals.’ Goa-trance or psytrance is the generic term for various subgenres that refined over the years. ‘The music we make is called progressive trance’, says Piet. ‘Other styles are offbeat, darkpsy or full on. The sound is very experimental and a certain monotony is useful to reach a state of trance. Goa is faster and more driving than other electronic music, darkpsy can reach up to 200 beats per minute.’

Besides Mexico and Brasilia, Germany with festivals like VuuV, Antaris Project and Waldfrieden Wonderland is one of the European hotspots for the international Goa scene. The atmosphere at those festivals is relaxed and friendly. The people seek eye contact and smile. It’s about the sense of community, tolerance and environmental consciousness.

Dogs play in front of the big chill-out-tent, where people relax, listen to hypnotic sounds and watch the mice that dash over the ground. It smells of chai tea that is made with milk and oriental spices, joss sticks and, of course, weed. Drugs belong to the Goa scene like they belong to every music scene. Most of the visitors think it is better to inform about drugs, instead of prohibiting them and making them a taboo subject. Jan, who offers massages in his tepee, is one of them, although he doesn’t take drugs anymore. ‘For me Goa also works without drugs. I took them for 40 years, now I think it’s just boring, apart from the dangers. You forget the love and your libido gets lost. It’s just a synthetic happiness.’ What Jan likes about Goa festivals is the creative energy and the visual design.

While it gets dark, the lasers and black lights turn the area into a surreal world. The music will be playing all night long and the people will dance and celebrate love and peace on this little island of happiness. May the spirit be with them. 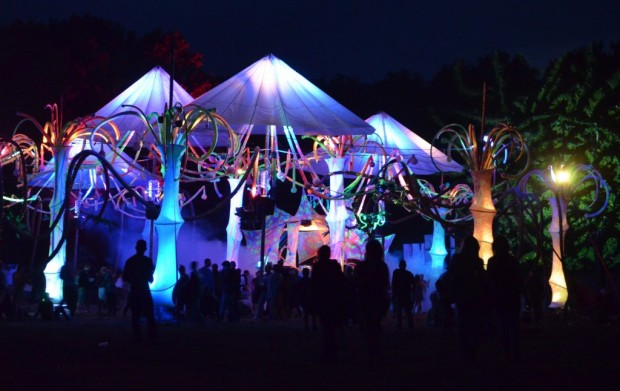