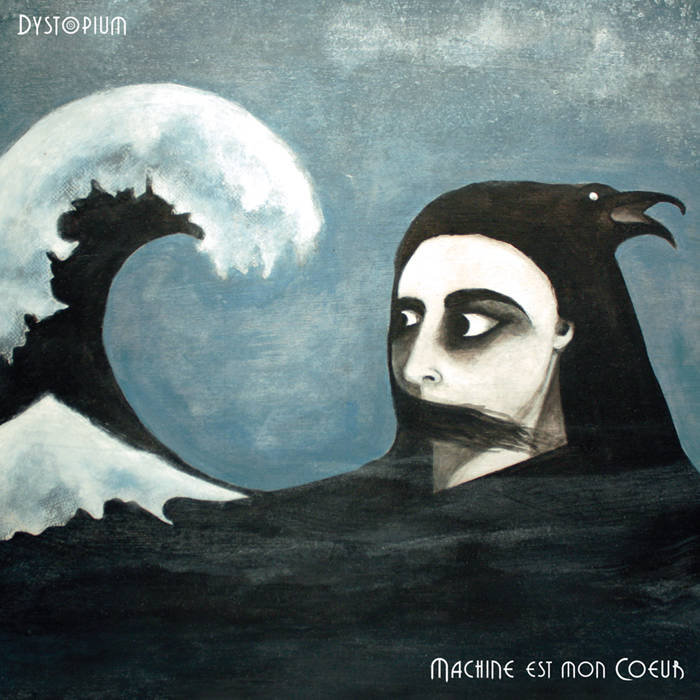 MACHINE EST MON COEUR are a half French, half Australian duo comprised of Bianca Calandra on vocals and guitars and Gabin Lopez on synths and piano. Nothing But Hope And Passion featured their single Beam Of Fire back in February, and now they’ve returned with their first full-length album, Dystopium. Recorded in an old house in the French countryside (as, y’know, you standard debut album is), its press material claims that it mixes baroque styles with sci-fi dystopianism, which is a pretty big call to make. It’s time to find if then record can live up to the rhetoric.

What’s immediately obvious is that the band certainly do live up the ‘machine’ part of their name.  This is a very mechanical album, it’s industrial soundscapes combined with the human touch of Calandra’s soft, cushioned vocals. If Dystopium can be compared to anything, it might what a David Lynch soundtrack might sound like in 2015, with the director’s trademark bleak drama updated to include fizzing electronics and harsher, industrial sounds. I had a dream is built around thuds, echoes and Calandra’s voice, rising occasionally to higher notes before slipping back into a mechanical drone. Endormez-Vous is subtle and fragile, its bleeping melodies juxtaposed against the background crashes and wallops as it drifts to its conclusion.

There’s a slight resemblance to BEACH HOUSE in the album’s ability to drag the listener into its fuggy, dreamy headspace, but whereas the American band prefer to build out of the fog and swoop up into higher, brighter melodies, MACHINE EST MON COEUR stay firmly rooted down in the darkness. Dystopium is an album that is true to its name, a gloomy, immersive nightmare space that sucks you into its bleak, frosty but compelling world. These are songs that’ll probably never soundtrack a birthday party or light up a DJ set (not without clearing the floor in rapid speed), but it’s difficult to deny the achievement here. Dystopium is a odd and unique album, but one that is very artistically impressive once you get to grips with it. It’s not exactly going to function as breezy everyday listening, but those that do find themselves falling for it will fall deep into its murky, mechanical world.

Dystopium is a heavy, unusual album that takes some getting used to, but one that eventually draws the listener into obsessive re-listening in an attempt to fully uncover its shadowy, mechanical landscape.