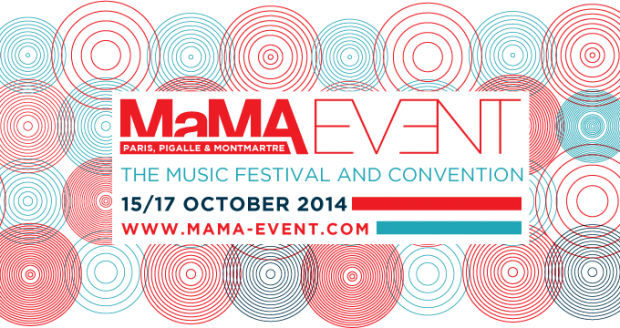 There can be no doubt: last week’s MaMa Event in Paris was a success. Three days all around the three major themes ‘festivals, artists, recorded music’ during the conference part of the festival. Besides that 100 acts attracted the crowd in 20 emblematic venues and unusual places around the world famous Moulin Rouge. NOTHING BUT HOPE AND PASSION went to the French capital to find out about new interesting acts.

CHASSOL harmonizes the reality. Known as pianist, composer and musical director (PHOENIX, SEBASTIEN TELLIER), Christophe Chassol is the author of something special with his combination of atmospheric music and live visuals.

GASPARD ROYANT and his backing band play highly energetic lo-fi rock. Yes, you can be reminded of THE HIVES now, but with a bit more high polish rock’n’roll attitude. Combined with the charismatic show by GASPARD ROYANT definitely catching.

NAKHANE TOURE is mostly influenced by African indigenous music and indie rock. After he got already hyped by Rolling Stone and The Guardian, also we say that the Johannesburg based singer songwriter has a bright future to come up. It is rare to see great young artists as NAKHANE TOURE.

Thursday: from dreaming to dancing and back to dreaming

English quartet CYMBALS take their electropop influence clearly from the 1980s. But they spice it up with literature and poetry which makes the band’s music dreamy and dancy at the same time.

We already stumbled upon NATAS LOVES YOU at this year’s Reeperbahn Festival. Now we saw the band from Luxembourg again and – again – have to say that their warm, bright and colourful indoe pop music is highly danceable and brings an amazingly good time to the audience.

French new wave / electronic pop outfit TRISTESSE CONTEMPORAINE are no new act on NBHAP. Their song Waiting was already featured on the free download compilation ‘Nothing But… Melancholia’. At MaMa Event Paris the it was time for a shoegazing dance with the trio.

PEGASE transforms muses into constellations and mesmerizes everyone who listens to their dreamy tunes. The musician and his band know exactly how to convince with minimalist and powerful pop music. At their show at MaMa time disappeared.

EZ3KIEL could be the soundtrack of the 21st century. OK, this might sound like a massive exaggeration, but this is our feeling after we saw the French crowd’s reaction on the electronic act’s performance at MaMa. Without any doubt EZ3KIEL create epic soundscapes that are absolutely worth to be checked out.

If not by now then definitely very very soon: KAROL CONKA will be one of the Brazilian artists all eyes will be on. At her highly energetic live shows the Brazilian M.I.A. should only change one thing: not having someone on stage who does nothing but making embarrassing moves. If Karol and the – seriously amazing – drummer & percussionist get backed up by a proper band they’ll make it to the big stages very soon.

KADEBOSTANY – again – smashed everything. Whoever sees this band live and doesn’t get infected by the Kadebostanian virus did something wrong. When electronic pop meets brass (and a pretty military style) everyone has to understand that this is the perfect mixture of pretty much everything.