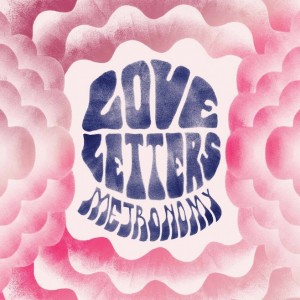 After releasing their third album The English Riviera back in 2011, British band METRONOMY became one of the most celebrated acts of the indiepop-community. Hits like The Look and The Bay could’t be left out on any groovy playlist. Now they’re returning with a new record, called Love Letters. The expectations have been high after the acclaimed predecessor – will METRONOMY continue with the fresh indiepopsound or will Love Letters be something completly different?

Actually, Love Letters is far more personal and experimental than The English Riviera. And it feels a bit like a journey back into former METRONOMY days where they worked a lot with restrained lo-fi sounds. In a recent interview with NOTHING BUT HOPE AND PASSION band mastermind Joseph Mount commented on this fact: ‘The lo-fi-effect comes from the recording via old analogue tape… I think the most important thing is to let the songs be in charge. And I also knew that I wanted to follow The English Riviera with something that was way more different. Half of it happened on purpose the other half… well, just happened naturally. I wanna continue this, you know – exploring this sound as I get more comfortable with my music.’

But it’s of course not only lo-fi pop. There is also a distinctive vintage sound on the record, like in Love Letter‘s title track. The sound – especially the piano and the backing choir- reminds of 60ies bands like the BEACH BOYS. Furthermore the guitar plays a bigger part than we’re usally used from METRONOMY. Never Wanted and the song with the fancy title and lyrics – The Most Immaculate Haircut – feature Mounts sentimental guitar playing. Although the curly head said in our interview that he’s not really good at it you don’t notice it in the tracks. I’m Aquarius – the album’s first single – is a catchy piece featuring nice synthie sounds and the choirs ‘Shoo-doo-doo-ahs’ which animate your body to move to the beat. Also an instrumental piece can’t be left out – Boy Racers impresses the listener with sounds that sound like a wich would perform magic.

There is one vast similarity to The English Riviera: Mount manages it again to diversify a lot with his unique voice – once low- pitched, the other time high-pitched; once natural, the other time out of tune.

METRONOMY‘s ‘Love Letters’ is a great record which unifies various styles of pop music. But some fans might be disappointed – it doesn’t continue ‘The English Riviera”s catchy indie-sound, rather it leads back to the band’s experimental lo-fi roots.