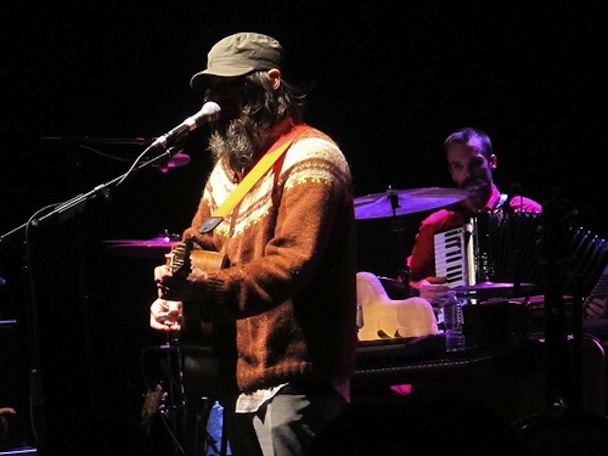 When a band that was best described as ‘a marching band on acid’ only released two official albums in 1998 reunite seemingly out of the blue and start playing shows, you’re going to feel a bit apprehensive. Especially when the reunion comes in a wave of 90s indie bands reuniting: what does it mean? How am I supposed to feel about this? NEUTRAL MILK HOTEL mean a plethora of things to the people who call themselves fans: Jeff Mangum’s plaintive, reedy voice over fuzzed out accordions and a heart-attack inducing horn section and various types of saws, their songs instill a frothing, intense devotion. You can be  fan from their original early days or a belated discoverer of the masterpiece In An Aeroplane Over The Sea and feel the same wrenching connection to songs that sing about pianos filled with flames and holy rattlesnakes around your feet.

With an impressive opening act from Brazilian band psychedelic rock act BOOGARINS, (begging the question ‘Who DO you book to open for NMH‘?) the crowd was primed. Reunion tours are the modern day form of idol-worship, and without further delay, the cult of NEUTRAL MILK HOTEL began releasing the snakes.  Looking like various incarnations of the Seven Dwarfs, including a guest spot by a female accordionist who turned out to be none other than Laura Carter of fellow Elephant 6 band ELF POWER (who we decided was Snow White, of course) a member of the audience commented, in reference to Jeff, ‘He’s old, but he doesn’t look more than 28…’  For reference, he’s the ‘old’ age of 43.  Doc, Dopey, Sleepy and Grumpy where all there, ready to counteract the poison apple with the most sublime, crashing cacophony.

The NEUTRAL MILK HOTEL show was everything you’re taught not to expect from a band schlupping back onto the stage together after a decade and a half. Instead of tension, they were a big happy family. Instead of the glazed look of musicians playing for dollar, not passion, they were leading sing-a-longs. It surprised as a euphoric gift of a show where every song felt like it was being played for the first time. 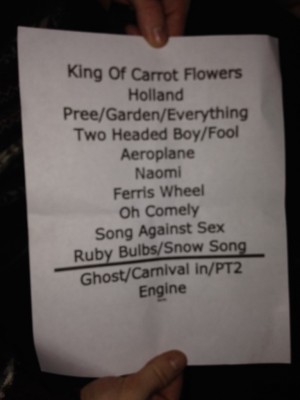 Still, the fifteen years had passed, and how. Formerly fresh-faced Jeff Mangum had done a Rip Van Winkle and woken up with a head full of grey hair and a long beard. But the saws were still there and Julian Koster was still bopping about like an eight year old on his birthday (in a NICE way) and even though, in their absence, a hundred other bands have tried to emulate their play-anything-as-an-instrument stylings and their weirdness, nobody has done it quite so well or quite so heartwarmingly as NEUTRAL MILK HOTEL.

Mangum had slumbered only to wake up to the horror the horror of the unending chatter of the social meeja world. Something we can only conclude he isn’t a fan of – there’s been strict NO PHOTOS OK? type signs and instructions from security guards throughout this tour, which is something that felt curiously charming. No need for that time machine, Jeff – just watching other people watch a band instead of watching it through their phones sent us swirling down a vortex all the way back to 1998.

And for a large chunk of the audience, that might have been the first time they’d seen a show without an aura of mobile-emitted blue light. Because despite us all assuming the show would be a massive nostalgia-kick populated by thirty to forty somethings, the girl beside us had braces on her teeth and there were a lot of people who looked like they’d get IDed if they asked for anything stronger than Coca Cola at the bar.

Jeff Mangum might not heart the internet, but the internet hearts him. Unless these youthful concert goers were each the rational end game of their siblings passing along mixtapes, one can only assume they (as I did, aged fourteen) discovered NEUTRAL MILK HOTEL via a blog or a playlist online.

And yet! Don’t underestimate the youngs. They knew every word and sung along just as throatily  as if they’d been at their shows the first time round and had been counting off the days the whole fifteen years until they’d return. Which was wonderful. Because the last thing you want is an audience full of record store clerks, right? The crowd danced and sung and were painfully, wonderfully enthused. More soon, please.