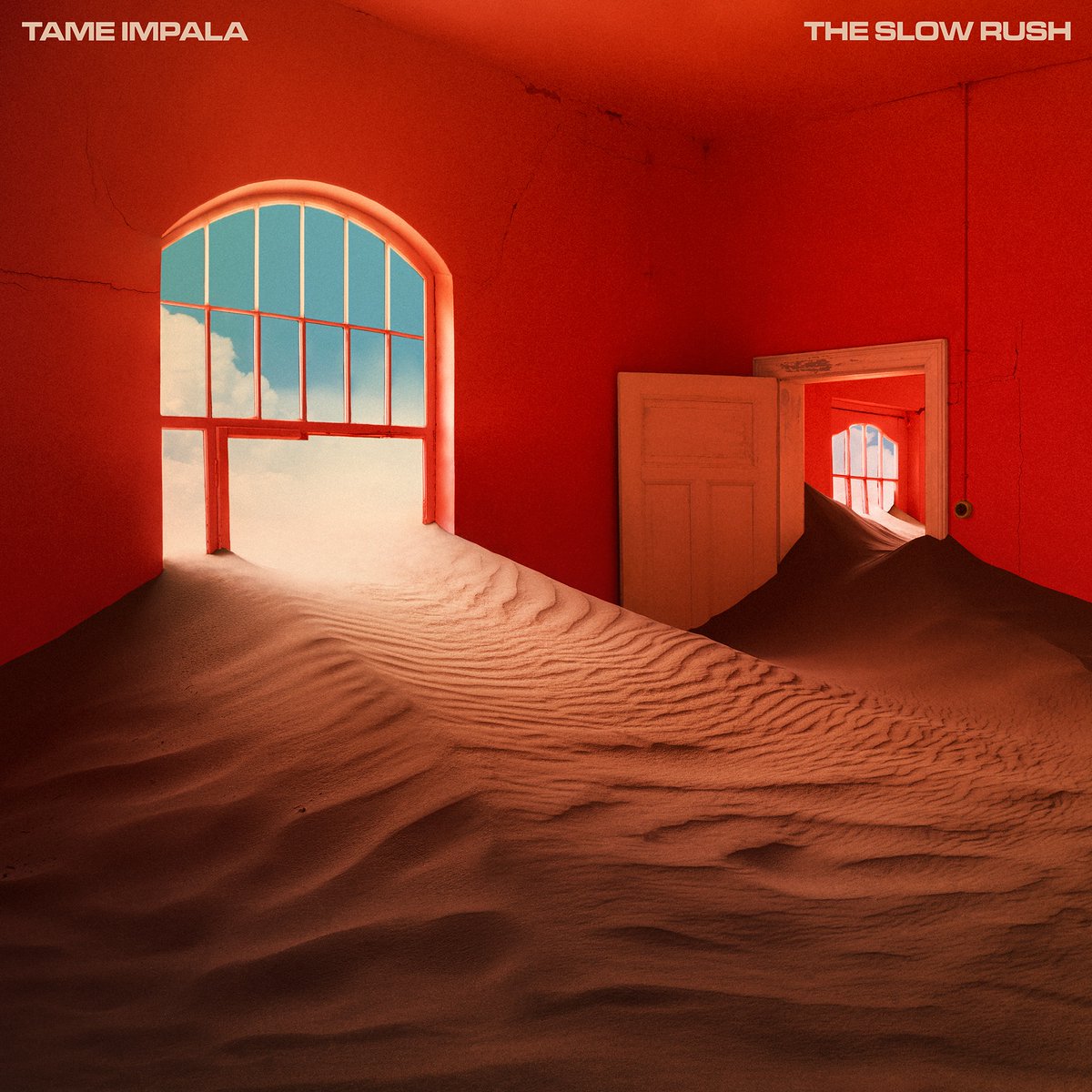 Sounds like … a supersonic voyage deep into the oceans of time.

For quite a few people out there, Tame Impala, the now world-famed Australian rock outfit around singer, multi-instrumentalist and producer Kevin Parker, is nothing less than the most precious band of the preceding decade. After the much acclaimed sophomore record Lonerism, it was the tremendous commercial breakthrough of 2015s LP release Currents, which catapulted the group to headlining festival stages as big as Glastonbury or Coachella. Pairing elements of psychedelic rock with electronic influences, added by an all-devouring synth alongside Parker’s frail voice, it was the experience of an overwhelming cosmic wall of sound that made sure the hype got real with this album. And once in its stream, it is pretty hard to resist the vibe.

Roughly five years later, the highly anticipated successor, The Slow Rush, is taking up forces to become the band’s next big thing. Inspired by the „idea of time passing, of seeing your life flash before your eyes, being able to see clearly your life from this point onwards“, the result is just an epic one. It shows once more Tame Impala’s potential of creating substantial worlds of sound that leave you at once dazzled and charged with awe. Similarly slick and spheric in its production, although more polished than the previous records, this album reverberates much of the giddy vibe of its precursor, in offering glistening, upbeat tracks like Borderline or Lost in Yesterday, which present the intensity of a broad-ranged sound palette. And then there are songs of a more evolving format, such as the precious Posthumous Forgiveness. Taking off with an atmospheric synth palette and some gentle guitar notes, this one grows into a passionate and deeply personal hymn about the singer coming to terms with the passing of his father. In its epic scope, this is a tune that can easily take it up with the density of Currents’ opener Let It Happen. “And while you still had time, you had a chance / But you decided to take all of your sorrys to the grave” … at least on a lyrical level, Tame Impala manages to take their art onto a whole other level. Quite honestly, not every track can compete with such grandeur though. Yet, The Slow Rush will be worth your time. While it mainly sticks with the core signature sound of the band, the new songs delve into an even deeper realm of feeling. This does not make it any easier to escape their fascination. (Andreas Peters)

DRAMA – ‘Dance Without Me’ 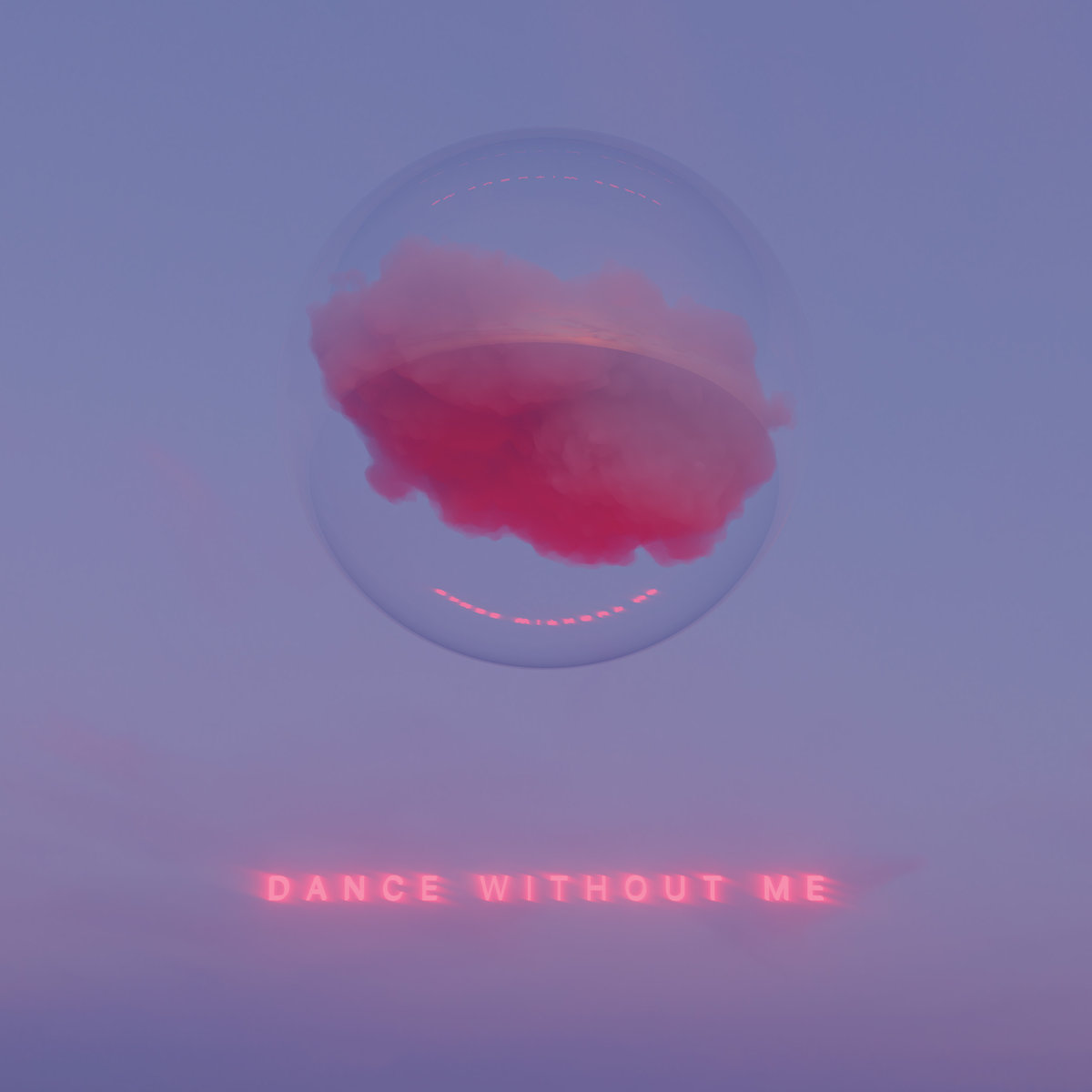 Sounds like … the musical equivalent of warm morning light shining into your bedroom.

Falling in love during spring time is the best and on the other side seeing other people falling love while you ain’t got nobody can be a pain in the ass and in many ways this sums up the theme of Dance Without Me pretty well. Producer Na’el Shehade and vocalist Via Rosa have been constantly working on their vision for DRAMA since 2014, ultimately resulting in a joyful debut album that’s packed with electrifying synthpop gems that deals exactly with the feeling of watching love blossom from the outside. Rosa isn’t even trying to hide the bittersweet melancholia in her songs but there’s also a decent amount of musical warmth that shines through the entire album, making it a record for lovers as well. I’m pretty sure picking Valentine’s Day as a release date was a conscious decision. Shehade on the other side delivers a fitting musical surrounding for it all. 7:04 AM opens the album with a fragile piano and a laidback beat, making it the musical equivalent to a spring morning’s first rays of sunshine. Years continues this vibe as it rides on a smooth drum break beat. Later on DRAMA speed up the tempo a bit and can’t hide their love for house music on songs like Hold On and Gimme Gimme. However, they avoid heading for an ‘in-your-face’ character here. The songs aren’t club anthems, they feel more like late night after hour dance tunes.

From the delicate four-to-the-floor vibe of Hold On to the trippy Good For Nothing and the trip-hop infected Days And Days – DRAMA manage to create a coherent, warm feeling throughout the entire record, resulting in a captivating flow. It partly feels a bit like a more life-embracing daytime version of HÆLOS since the American duo also flirts with 90s nostalgia when it comes to sounds and beats. And every now and then they also surprise the listener, for example with the beautiful string outro on Lifetime. After all Dance Without Me is an album that celebrates love, life and the positive things that can come out of it despite all the nonsense that goes on in the world. It’s the almost naive intimacy along with the musical skills and profound songwriting that makes this record so enjoyable, no matter if you are in love right now or not. If you are looking for a fitting electropop soundtrack to guide you through the upcoming warm seasons this might be a fitting choice. (Norman Fleischer) 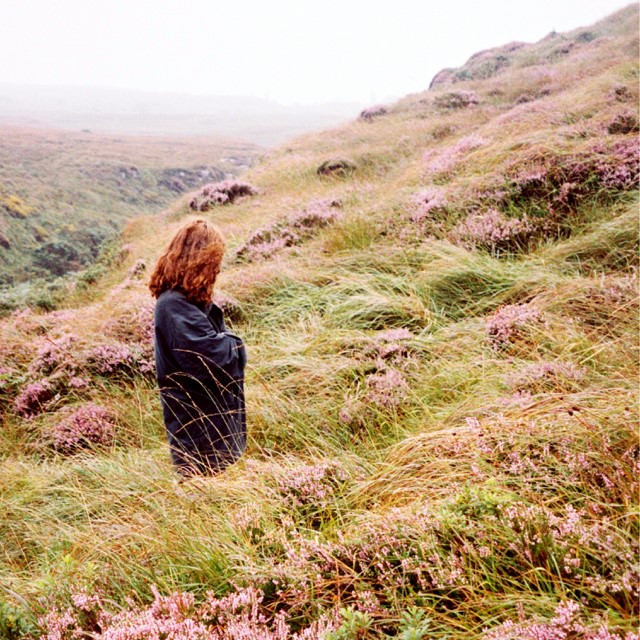 Sounds like … an old grainy photograph from the unruly seaside.

If a grainy photo of a seaside landscape were to become a piece of music – it would probably be Núria Graham’s new record Marjorie. The half-Catalan, half-Irish singer ponders in melancholia for the seaside towns in Connemara and visits smoky bars on the Toilet Chronicles. Assuming several roles throughout the album, the singer is mainly driven by the inspiration of her grandmother Marjorie, whom she never met in person. With steady electronic percussion and just the right amount of subtle synthesizers, the young artist creates an irresistible draw for the distance, an ever present nostalgia – the kind you get when you stare out into the misty of over the horizon over the ocean for too long. Yet, the vocals do the real transporting back into the past. Tender and soulful, they tell observational tales some sixties folk musicians would grow jealous of.

On Marjorie, Núria Graham walks with an assured step on the road she has carved out for her musical vision. Between hazy folk, soulful vocals and the occasional syncopated beat, she lulls the listener into her own universe. Actually, she even does so visually. I do not think anything captures the sound of the album better than the video for the single Connemara. So I will stop right here. But not without saying that capturing the melancholia inherent to the stormy seaside of Ireland through music, is not as easy as Núria Graham makes it sound. (Liv Toerkell)

Sounds like … when there is nothing more to do, listen to ÄTNA.

ÄTNA take the love hate relationship between pop and electronica to the next level and show us that it can still be done so well! The holy trinity of this record are clearly the pop sensibilities fused with deep electronic beats and topped with the impressive vocals by singer Inéz. After already impressing with two EPs the German Duo is now releasing the long-awaited Made By Desire. The record shows off their capability to make people dance with punchy electronica that could be played in dark Berliner underground clubs, like on Come To Me. But on Made by Desire ÄTNA introduce us to another side of the project; Try is a tender ballad and a dance between minimal piano instrumentation and the singer. Throughout the other tracks, the vocals are often distorted or electrically enhanced for the according to the vibe of the track but here, Inéz voice is pure and strong.

‘Try when there is nothing more to do’ her deep voice resonates. Then, another surprise on Try; to the gloomy electronic orchestration the singer suddenly switches to her native tongue. The darker timbre of German fits so well into the instrumentation, you almost might not notice it at first listen. Another highlight with surprising twists and turns is the club-ready anthem Like That Game. Demian’s drum-heavy pulsating beat feels exotically dynamic – it shifts from minimal drum driven to ecstatic explosions and lastly to chirping birds. The most impressive trick this duo pull off is making it all sound so natural, you do not even question their intelligent arrangements. While dancing to it – hold on every once in a while, to listen to the details ÄTNA lovingly worked into their debut LP. (Liv Toerkell) 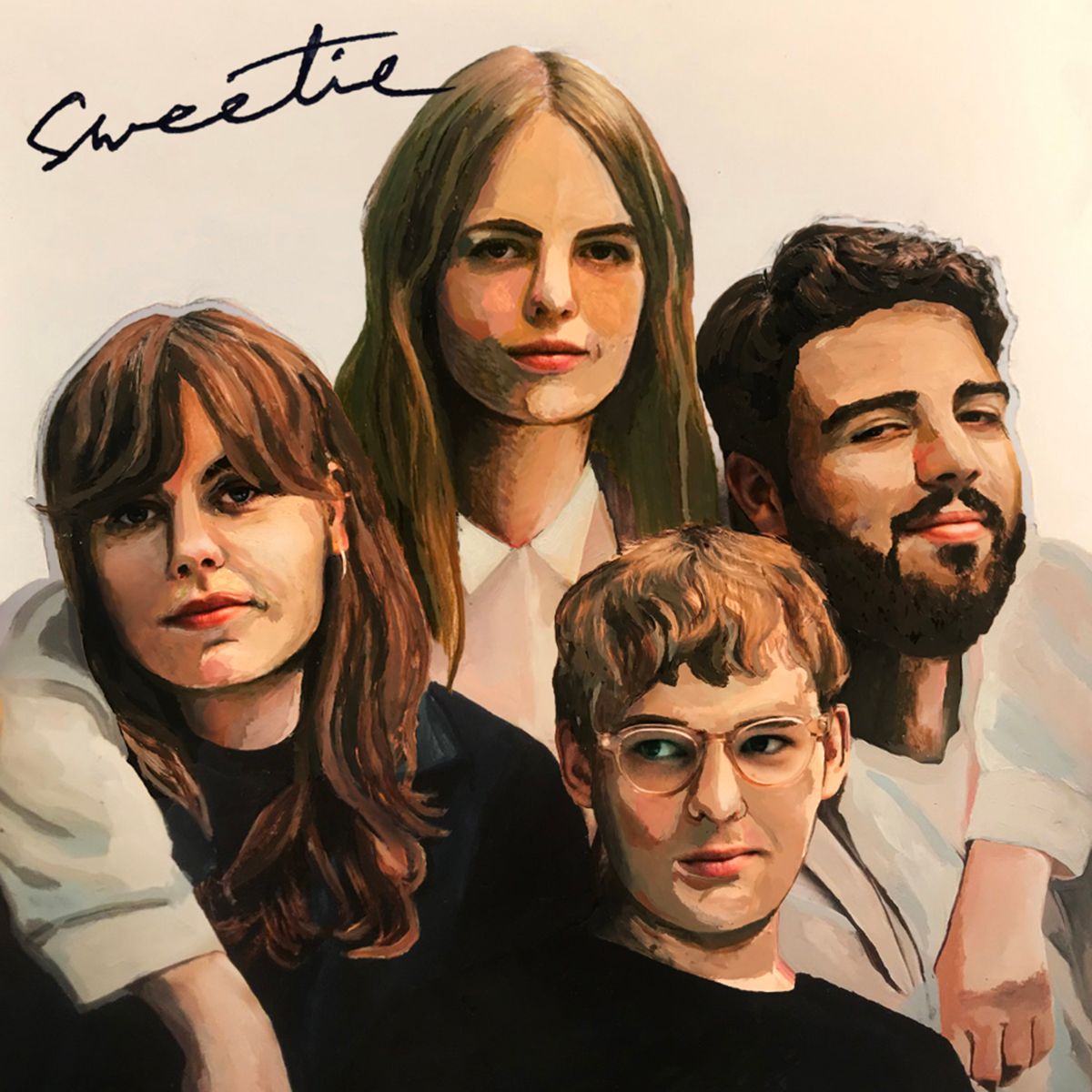 Sounds like … timeless heart-wrenching indie-pop anthems for all young romantics.

The debut album by the band with scene’s coolest name too a while to manifest itself. Four years after their first single and a few more promising good tracks later Steve Buscemi’s Dreamy Eyes finally unleash Sweetie to the world, packed with some of their finest work to date. The twelve songs on this LP place themselves in a familiar field between dream pop and new wave romanticism, carried by shimmering guitar melodies and pumping basslines, enriched with personal stories from the band as they reflect on their personal futures. Lead singer Siri Sjöberg’s voice plays a distinctive part here; it’s unusual, soulful and not as slick as one might expect it. It helps to transport the youthful wondering and the tender melancholia that dominates the sound of SBDE.

Moon starts the album in quite a joyful way and tracks like the uplifting Stainless Steel and the huge anthem Change Of Heart continue the energetic vibe of Sweetie. In-between the single ingredients get their time to shine bright. Future Is Dance gives bassist and co-vocalist Tilde Hansen the chance to unleash a funky bassline and there’s also a glamorous guitar solo happening in the end. Intern is also a nice example here as it gives the bass play a bit more space to unfold its groove. A few more quiet tracks like the tender Distances would have also suited the record as it also shows a great strength of the group here. Harmonies and big anthems suit these folks pretty well but it’s actually the grounded nature of Sweetie that is its biggest strength of this lovely little record. Steve Buscemi’s Dreamy Eyes aren’t even trying to be something bigger than they are. They keep things pure, light-hearted but still loaded with a lot of emotion. There’s undeniable love and great talent sensible in these songs once you get behind the odd band name. (Norman Fleischer)