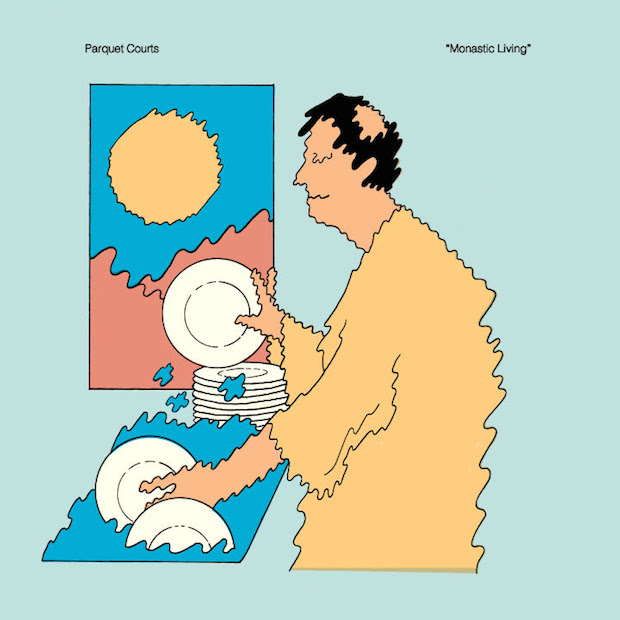 Eclecticism is the way

PARQUET COURTS can do everything they want. After Sunbathing Animal (2014) and the releases of their album Content Nausea in 2014 and the EP Tally All The Things That You Broke, 2013, all under their other name of PARKAY QUARTS, the New York post-punk band publishes a mini-album with nine songs and over thirty minutes of music.  The album being almost entirely instrumental – with sparkling guitars, rocky bass and a solid drum –  Monastic Living is a record in which the eclectic nature of PARQUET COURTS reaches its highest point.

Post-punk and experimentation in the Monastic Living

Monastic Living is a post-punk album. The opening track No, no, no! is the only song with a vocal track. The record begins with a mechanical drum, punk shouts, heavy guitars and a final ‘No, no, no!‘. It’s more than a minute in duration, it takes less than a second to understand how cool the album is. The title-track is an hypnotic sequence of chords that ends up in feed-backs and overdrive fury. Harsh Elegy Of Imperialism and Frog Pond Polor are both songs that last less than two minutes but who’s acid guitars and instrumental rage dominate everything. Condition Holiness is quite an electronic song with organ and delay, that guarantee a success. Same can be said for Monasting Living II: electronic and calm vibes. Alms For The Poor is an interlude that, through the exuberant Ignored Suffering, takes you to the great finale: Conversion.

Monastic Living is another demonstration of the artistic attitude of PARQUET COURTS. The band feels comfortable with experimenting but never forgets its healthy cynicism and a political sarcasm, which is made visible just looking at their song-titles. This last release keeps the band quality level high, with some immediate impact songwriting and heavy sounds that can be soft too. The EP is their debut on new label Rough Trade, and PARQUET COURTS have managed to create a very good album that flows, despite nine instrumental tracks. All that’s left to say is: good job guys and never stop running.