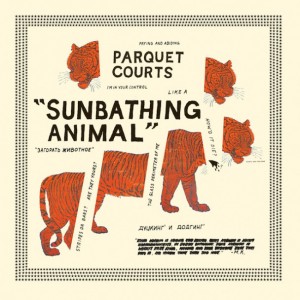 PARQUET COURTS first charmed the world with their unique blend of lo-fi rock back with their debut Light Up Gold. Named in reference to their love of basketball (we learned this in our interview with them) PARQUET COURTS‘ follow-up, while not drastically different, is a significant improvement: the band sounds tighter, more composed and still making us laugh with lyrical in-jokes like “You can read about it in her Moleskine.”  Like a modern-day PAVEMENT, the  band has almost nonsensical lyrics over solid musical chops: you can sing along even though everyone will look at you like you are nuts.

Opening with Bodies, the chorus is “bodies made up/slugs and guts” and that sets the tone for the sort of post-2000s realism the album brings.  This is not alternative rock to get happy to, but to get drunk to and think about your problems.  Vienna II is the track that most obviously references DEVO and the post-punk band TELEVISION, with monotone lyrics and a simple guitar riff. She’s Rollin is the song you listen to stoned thinking about your ex-girlfriend, with a plodding baseline and sloopy fuzzed out guitar to fuel your jealousy. It ends in with a harmonica as played by a beginner, pure genius.

The first single from the album, Sunbathing Animal, was presented with a kind of anti-video (the whole thing is black and white cat hanging out on a couch). The song is a furious, charging punk song that would fit in on a 1980s punk seven inch. Lest you think all the rage is directed outward, the guys get introspective with Instant Disassembly: “Mamasita, I plead my defense.“. The thing about Andrew Savage, the frontman and songwriter of PARQUET COURTS, he’s an avid reader, so look for a big vocabulary and some literary asides in his songwriting.

For fans of bands like BUILT TO SPILL and THE JAM, PARQUET COURTS second album ‘Sunbathing Animal’ will delight and beguile.