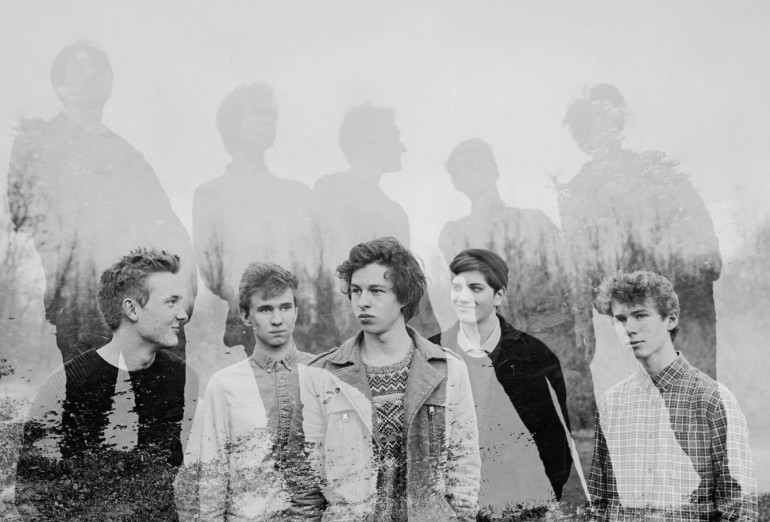 GIANT ROOKS. The name of the band sounds catchy and memorable, yet mysterious. There is not much information about the newcomers floating around the internet. But if you discover GIANT ROOKS here and now, you will be able to watch a band grow, develop, and progress. NOTHING BUT HOPE AND PASSION editor Chris sat down with the band to provide ‘a portrait of the artist as a young band’.

GIANT ROOKS are both incredibly busy and young. Within the past twelve months, they released two singles (Småland and Chapels) and a debut EP called The Times Are Bursting the Lines. Their amount of releases, written songs, and touring is even more remarkable considering that only three of five band members already left school. GIANT ROOKS are Frederik (vocals, guitar, percussion), Finn (guitar, vocals), Luca (bass, vocals), John (synth, piano), and Finnbo (drums) who all come from Hamm in North Rhine-Westphalia. Although the band was founded only two years ago, in 2014, especially Finn and Frederik have known each other for a much longer time: We are cousins and started to create music together at the age of eight, says Finn.

The term ‘indie’ is overused

The strong relation between the two cousins might in parts explain why the band appears rather experienced and self-confident while at the same time still being young and, quite obviously, extraordinarily talented. However, the whole band interacts and is involved in the process of writing songs: Well, generally speaking we get inspired by artists and music we like. Furthermore, personal experiences as well as literature and film serve as a basis for our lyrics, tells John. John and drummer Finnbo became acquainted with Frederik and Finn at school and decided to form a band. GIANT ROOKS eventually completed their line-up with bass player Luca whom they encountered through the internet.

Through the year-long gestation period of their music, the band has created a sound that eschews the aesthetics of traditional genres. As Finn points out,

‘The idea for ‘art-pop’ came up when we were trying to find an alternative to the label ‘indie music’. First, we thought that ‘indie’ does not really describe what we do. What is more, the term ‘indie’ is overused and sort of everything can be classified as ‘indie’ these days.’

They are not the first German newcomers to play with self-invented genre labels. Prominent examples include DER RINGER (‘soft punk’), DRANGSAL (‘brachialpop’), and ISOLATION BERLIN (‘Berliner schule/ proto-pop’). As much as it conveys a certain ironic relationship towards overwrought categorization, it also serves as a way to highlight uniqueness and distinction amongst a flood of buzzwords.

If you take a closer look at the present work of GIANT ROOKS, especially the inclusion of the word ‘art’ makes sense. Together with some friends and almost no budget at all they filmed and released two impressive video clips for both Småland and Chapels. Whereas the footage for Småland shows the band members on the road, the reduced clip accompanying Chapels visualises a live session of the band playing their second single in Frederik’s living room.

‘The visual aspect of our work is important to us. When we received a message saying that the pressing plant would not be able to print the artwork for our EP in time, we used some stamps and did a first limited pressing ourselves.’

‘We and the people who bought the CD liked it so much that we used the same concept for a reissue of The Times Are Bursting The Lines’, explains Frederik. Musically speaking, ‘art-pop’ underlines the band’s aspiration to experiment with new sounds. This makes us diverge from classic indie pop, says Finn.

NOTHING BUT HOPE AND PASSON is proud to announce and present an exclusive stream of GIANT ROOKS‘ debut EP The Times Are Bursting The Lines for a limited time. Cosy, yet brisk in character, the five-piece tells tales of carefree times spent in picturesque sceneries. Echoing a juvenile melancholy, an undirected yearning, these stories are delivered with a maturity unusual for such a young band. Moments of urgency, such as the buoyant opener Itchy Feet, contrast with the more somber moods of Rituals or the slick R ‘n’ B leanings of Småland. However, it is the live take of Chapels that captures best the dichotomy of youthful élan and creative foresight, marrying lush, idyllic pictures with a rhythmically dynamic performance. A reissued edition of the EP including a colourful poster is now available at their online store.