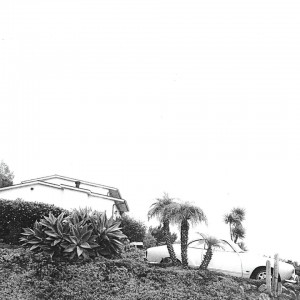 PR agencies like to use the word ‘cinematic’ to describe the music of their artists. Probably because it is universally applicable. ‘Cinematic’ is always right somehow and for journalists it’s pretty comfortable to jump on that bandwagon.

The good news is: There are cases that justify the use of this word or even cry out for it. Hot Dreams, the new LP of Canadian band TIMBER TIMBRE, is a perfect example. Frontman Taylor Kirk, a former art school student, was always interested in making films and writing the music for them. In the end he decided in favour of music and founded TIMBER TIMBRE in 2005. Simon Trottier and Mika Posen complement the band with their multi-instrumental abilities. For Hot Dreams the trio got further support from Olivier Fairfield on drums, Mathieu Charbonneau on keys as well as from saxophone player Colin Stetson and backing vocalist Romy Lightman (TASSEOMANCY, AUSTRA).

As Taylor Kirk told NOTHING BUT HOPE AND PASSION in a recent interview, he got the ideas for Hot Dreams in Laurel Canyon, California. The place is known for famous inhabitants like FRANK ZAPPA, JONI MITCHELL and JIM MORRISON. The landscape, the people and the spiritual energy inspired Kirk to write ten new songs that would match a 60s movie as well as a Jim Jarmusch or Tarantino film.

Hot Dreams is TIMBER TIMBRE‘s fifth studio album and Kirk uses terms like warm, dense, lush and yes, cinematic, to describe it. Compared to its predecessor Creep On Creepin’ On (2011), Hot Dreams is heavier and dirtier.

The opener Beat The Drum Slowly sets the direction that the whole record consequently follows. Jarring violins, drums beating the time and omnipresent guitars create a balanced yet angular and sometimes ghostly sound.

The single Curtains!? sounds like NICK CAVE quickly delivered a latecomer for the Django Unchained soundtrack and the last instrumental track The Three Sisters could score a slow motion showdown of some bone dry western scene.

Hot Dreams is a solid and special work. Here and there we’ve got some long-drawn passages but then there are those great irritating moments like in Run From Me. It starts like a piano love song but changes to the opposite when creepy violins and female voices are added and Kirk is singing ‘You better run for your life’. More of those moments would have helped to keep Hot Dreams even longer in mind.

The record will be released on April 1 via Arts & Crafts and the new pieces could definitely continue the number of TIMBER TIMBRE songs that have been used for the soundtracks of series and movies. If you tend to speak about the good old days with a whisky in one hand and a cigarette in the other, Hot Dreams is the perfect record to abandon yourself to sweet melancholy and lower your eyes with a sigh.

‘Hot Dreams’ is a nostalgic homage to the golden era of Hollywood. TIMBER TIMBRE‘s thick blues and ghostly folk will leave you with a scary and wonderful feeling of melancholy.