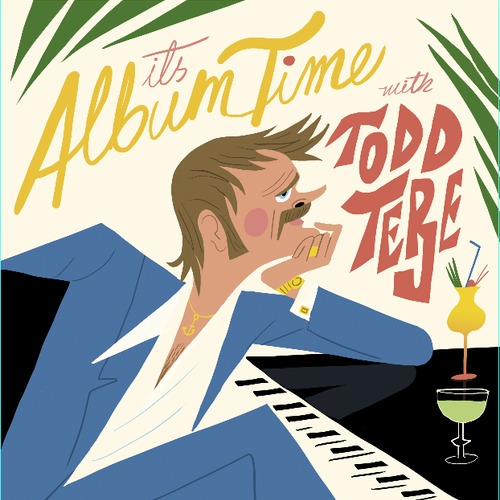 It has been a decade since Terje Olsen first appeared in the dance music underground. Known for numerous cheeky releases under the names like TANGOTERJE and CHUCK NORRIS, Norway’s Terje Olsen, better known under his alias TODD TERJE, finally cooked up his debut full-length album It’s Album Time. Around three years ago Terje started to focus on his own productions. Since then he managed to built a reputation by remixing classy disco edits. That might sound like TERJE being a retro-fetishist and about ten years too late. But he is going to prove that prejudice wrong.

TODD TERJE is one gifted and confident producer to make up those surprisingly sticky synth lines. Leisure Suit Preben has this overall sentimental feeling in the beginning – lonely, nearly classical and somehow also triumphant. These lush groovy arrangements are just a hint of what he, musically speaking, is capable of. Delorean Dynamite is one piece of high energy music. It fits perfectly into the cosmic discoesque sound of the whole album but has a slightly dark groovy territory that converges into quite a pop tune by the end.

His and BRYAN FERRY’s cover of Robert Palmer’s Johnny and Mary, is by far the quietest tune on the album, bringing us back to the smooth side of the 1980. It is nothing but a bubbly soft pop hit, dimmed with bright synths and a slow motion beat. Overall Terje delivered a lovely homage and shows the potential of such an evergreen. The all-time piano loop of Inspector Norse can not be missed on the album. Being all around the web and on the dancefloors from 2012 on, it still has its infectious grooves. The kind of daytime noir song you could be listening to forever and the perfect piece to end this space disco firework.

The emphasis on It’s Album Time is primarily light and breezy. There are themes for solitude, themes for walking alone and some catchy delirious high rising tracks. There is an energetic rage of colour and mood all over the album, which is refreashing and fun.

The waiting for the full-length debut of TODD TERJE was worthwhile. Having the playfulness, he turns any tune on the album into a soft joyride with his synthesizers.