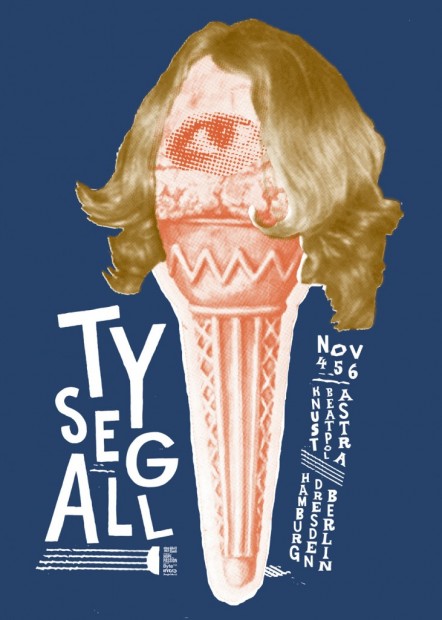 TY SEGALL is nothing short of a garage prodigy. Well-schooled in the arts of fretboard-licking and fuzz-mongering, the intensity of his prolific audial output can only be matched by the raucous unravelling of his notorious live show. His appointment with Berlin’s Astra Kulturhaus last night, then, was one met with giddy joy by lo-fi lovers the city over.

Astra is a gigantic hall, curiously reminiscent of a highschool gymnasium when not concealed beneath its cape of coloured lights. A problem with the stage set-up was immediately apparent – a metal barrier had been erected, wedging a hefty two-metre gap between the musicians and the audience. Anybody that’s been to a TY SEGALL show in the past knows that this is unacceptable. It failed, however, in its efforts to deter. Before the support had finished a special friend – known only to us as ‘The Monkey Man’ – became the first to take the stage plunge, crashing fairly promptly to the ground in a tangle of limbs; the precedent, then, had been set.

Our long-awaited garage hero was introduced by the mysterious ‘Jimmy Longhorn’, a swagger-savvy cat in a cowboy hat who told the tale of his life running a saloon on the fourth moon of Jupiter. One day, he explained, a horde of wandering galactic ruffians had turned up on the doorstep; naturally, he took them in. At this point, somebody throws a plastic cup – a seemingly small ripple that becomes the opening missile of a battle which will be waged the entire evening. 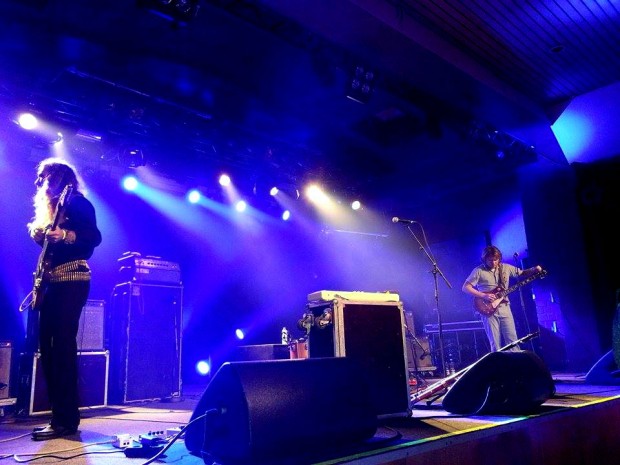 SEGALL takes the stage in a blue jumpsuit, eyes rimmed with his now-characteristic metallic embellishments, and dares the crowd to throw as many cups as possible at him during the show. He soon ups the ante, demanding that future cups contain beer. ‘No beer?’ he challenges. There is no response. ‘Aww, you don’t want to throw beer at me because you want to drink it all? How nice!’ he mocks with a clean touch of sarcasm before launching back into the stringed fray, dodging the incessant wave of projectiles.

The first half of the set cleanly rides the Manipulator wave. With a full twelve months set aside for its conception Manipulator is slicker, smoother, bejewelled with galactic garnishes and extra-planetary harmonies. Feel descends into a deliciously chaotic swerve, SEGALL pulling bends and turns from the fretboard as though manipulating spoons, while Tall Man Skinny Lady is a glittering number that edges SEGALL toward a sweet falsetto, a shiny shard of Californian sunshine. 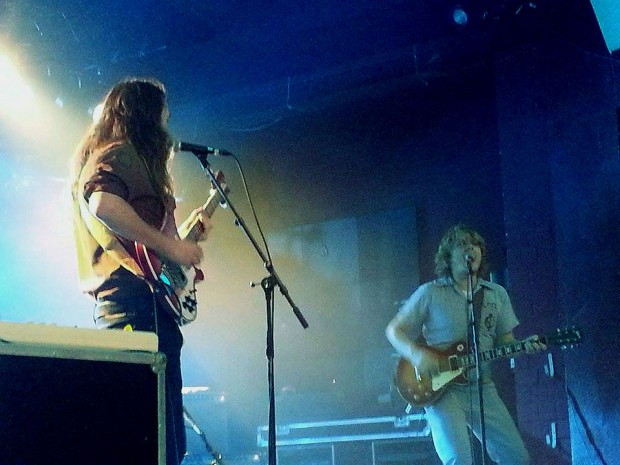 The hall gets continuously sweatier as the writhing mass spreads, drawing more shoulders into its tentacles. Young things hoist over the metal railing and fling themselves into the crowd like dying moths before a lamp. The mob in the middle becomes a pit that boils over with volcanic ferocity. It’s Over is a lightning bolt driven into shaking chests; it’s spasmodic, continuously picking up speed, a perpetual careering into the fuzzy abyss. Caesar is a welcome appearance from the back catalogue and draws the most spirited reaction from the crowd, swinging back and forth between a wall of thick guitar and a spirited singalong: Whyyyy, must the people cryyyy? is the howl, hundreds of arms appealing to the roof in unison. The final episode of the cup saga arises when SEGALL‘s comrades hand him an impressive stack, which he hurls into the crowd like a javelin. Within moments, they are flying back at him, a plastic meteor shower of oddly-chosen affection tokens.

The encore is a slightly mysterious conglomeration of tracks; though of course, expectation isn’t a word that finds prominence in the TY SEGALL vocabulary. Bodies continue to seethe almost involuntarily until the last drop of sonic juice is squeezed, the musicians ushered out with a thunderous, perhaps slightly debilitated round of applause. As the houselights creep in with their yellow glow, the hall is a throng of glistening foreheads, rosy cheeks, and sweaty shags of hair that lie limp and exhausted like a pile of wrung-out towels. This, and the glimmer of glee in their eyes, is all that’s necessary to confirm the success of the evening’s intergalactic voyage.