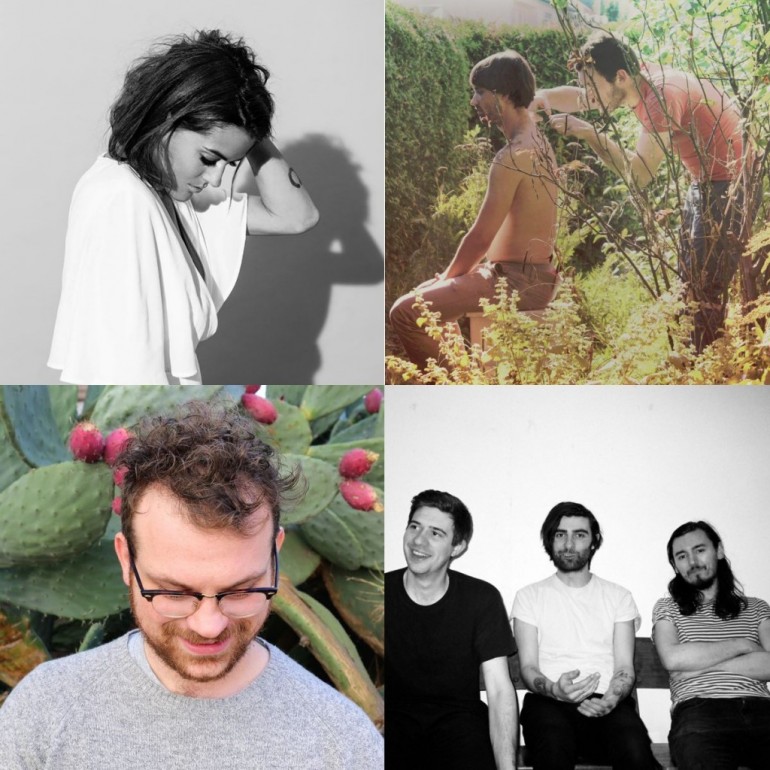 Okay, CHLOE BLACK might look and sound like she’s been manufactured in a factory for contemporary hipster pop but… damn, is that single catchy. Groupie is indeed an hommage to the legendary ‘profession’ and all the things that came with it back in the 1970s. The singer states: ‘In some cases these groupies have become even more legendary than a lot of the men they worshipped and have become poster girls for rebellion and sexual liberation.’ Who would have guessed that there’s a feminist aspect to this, right? Listen right here.

We can’t really say that we are surprised about the level of weirdness Swiss krautpop two-piece KLAUS JOHANN GROBE provides in its latest music video. Geschichten aus erster Hand delivers a really strange and slightly pschedelic performance video that proves once again why you should keep those guys on your radar. The new LP Spagat der Liebe arrives on May the 6th via Cargo Records and we would like to take this opportunity once again to advertise the sexy guestmix these guys created for NOTHING BUT HOPE AND PASSION back in December.

We almost overlooked this really entertaining music video by PUP but since it’s never too late to share high quality we might give it a shot right now. If This Tour Doesn’t Kill You, I Will is not just a powerful piece of lo-fi garage rock with an entertaining title, it also comes with a funny and bloody-thirsty music video which you can witness below. The new PUP record The Dream Is Over arrives via SideOneDummy on May 27. You have been informed

There aren’t a lot of feelings that are as wonderful as the one of waking barefoot on the sand, right? It was about time for a new song about these moments. Italien songwriter GIUNGLA made one. It’s called Sand (obviously) and hypnotizes the listener with infectious guitars and luscious melodies. A new EP called Camo arrives on May 20 via Factory Flaws and you better make sure to have the following song in your vacation playlist this summer.

John Congleton & The Nighty Nite – ‘Until It Goes’

A little NSFW piece that we want to draw your attention to is this rather new video for JOHN CONGLETON & THE NIGHTY NITE‘s Until It Goes. Actually, it’s really pretty gorey, so consider that before you hit play. But you definitely should do so as this is just another piece of twisted, stomping beauty from the hands of Congleton who most of us know as the prolific and Grammy-winning producer of records from ST.VINCENT, SWANS, THE THERMALS etc. etc. It’s hard to believe how many great records sound the way they do because of this man. His former band incarnation THE PAPER CHASE has now been replaced by said JOHN CONGLETON & THE NIGHTY NITE and they just released their debut record Until The Horror Goes via Fat Possum. Get yourself ready for some unsettling noise-rock in the shape of odd pop bliss.

Susanna – ‘In The Need Of A Shepherd’

We reported about distinctive Norwegian singer SUSANNA before via her video Hole. Now, she unleashed new visuals for her song In The Need Of A Shepherd. The track is the latest teaser off the upcoming LP Triangle (out on April 22 via Cargo). The clip was directed by Guri Dahl and its a simplistic black and white video that manages to underline the industrial feel in the song. Follow SUSANNA on a dark train ride below.

Jake Rollins – ‘Figure It Out’

JAKE ROLLINS‘ Figure It Out is part of Brighton label Memorials of Distinction‘s new tape comp Sentimental Journey (the label blurb for which has some of the best track descriptions going. Why can’t all music PR be like this?). It’s that kind of fuzz-pop that US indie bands do so well, with a absurdly pretty, beamed-straight-from-the-sun melody wrapped up in waves of scuzz and squall. The tape drops on April 20th, and if tapes are too old-school for futuristic, high-tech kids like you you can also listen ‘online’ too.

None other than Mark Hoppus of pop/punk old stars BLINK 182 produced the new album by garage rock sweethearts PAWS. That might sound like a surprising combination of worlds but the result looks pretty handsome and sounds like tight hit material. The band wrote their new LP No Grace in a reflective period after spending an entire year on the road and you can witness the result in the form of its first two tracks below. The entire album arrives June 17 via Fat Cat.

Swedish trio CHANCVN (pronounced chan-coon) have just released their debut single Heart Out, and it’s a song loaded with the kind of widescreen, sweeping grace that pop at its peak can achieve. Musically, it’s crafted from thumping drum momentum and nervy guitar riffs, which inject the song with tension and intensity that builds and builds until it’s all released in the cathartic rush of the final chorus. Pair that with the delicate emotion in the vocals and some exposed-nerve lyricism (“nothing but my pure confession, could reach you”) and you’ve got a perfect piece of classic indie-pop.

Two years after his really sweet LP Arranged Waves charismatic US songwriter STEPHEN STEINBRINK returns with a freshly announced new album. Anagrams arrives on July the 1st via Melodic Records and a first single called Absent Mind arrives today, providing sunny vibes and the right amount of intelligent songwriting we’ve come to love from this man. ‘I don’t care about continuing in a tradition of songwriters,’ STEINBRINK also explains while adding: ‘I rarely intentionally self-identify as one.’ He might be something entirely different but that makes him even more interesting for us.

Undone by ELLA ON THE RUN is that sort of pop song you are allowed to like. It got that tender sinister vibe that mixes epic drums with synthpop and those sweet 80s new wave guitars we all can agree on. The London-based artist clearly is one to look out for. Undone arrives via Skruffy Records on April 22 and fans of intelligent and crafted pop melodies should risk to hit the ‘Play’ button below.