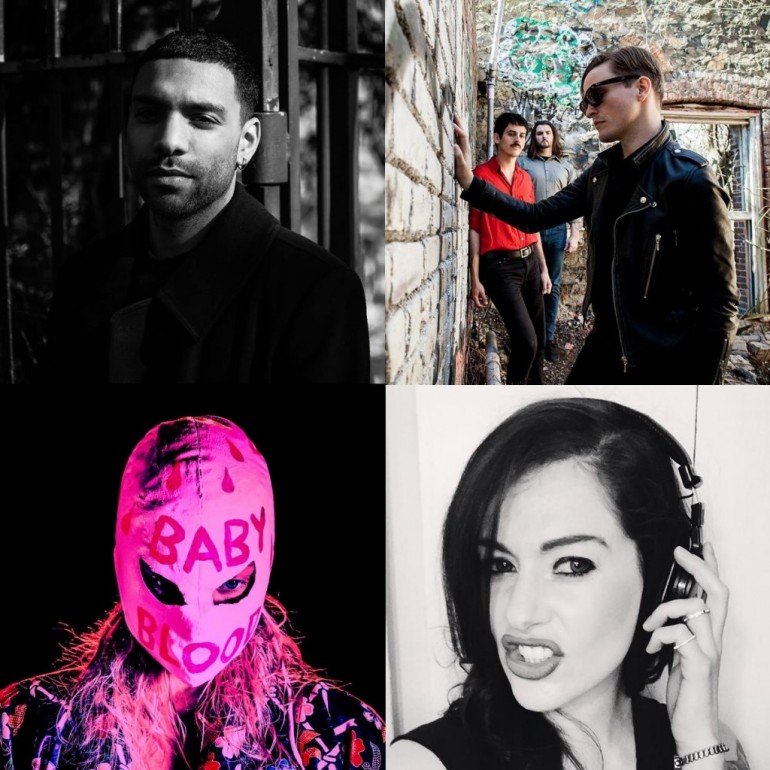 Following their quite satisfiyng 2014 debut LP After The End, American new wave rockers MERCHANDISE now make a pumping comeback with a colourful new video. Flower Of Sex is a first teaser from a potential new studio album and the track spreads finest late-80s fuzz magic, carried by charismatic leading man Carson Cox. What a tune, ladies and gentlemen. It’s the anti summer hit for 2016, that much is for sure. At least for those who don’t enjoy sunny beach that much.

CEZAIRE is the head of Roche Musique, a french-touch housy label that is becoming seriously trendy. Other artists from the label include FKJ and KARTELL. They’ve been heavily touring over the last two years, to the extent that they’re now unavoidable on the french scene and are collaborating with prestigious institutions as the Kitsune house. Some even say it is they represent the renewal of the french touch. For the time being you can enjoy this song from the first EP of CEZAIRE – with which he proves that he is as talented as a label manager as an artist.

LANDSIDE is the new side project of Italians producers HUNTER/GAMES with which they’re collaborating with KURA, an icelandic band. Their sound is melancholic waves of synths layered by slow thumpy beats. The production is very refined, and they’ve already have sweet remixes as this one with AXEL BOMAN. This first EP – just released – let us imagine the best for a possible forthcoming album. They made their live debut a few weeks ago and most likely will go for a full tour anytime soon.

NICOLA CRUZ is one of the most exciting electronic producer from Ecuador. Last year, He released a fantastic album titled Prender El Alma on ZZK Records, the most influential label of Buenos Aires. His label just released an album of remixes from his first full length, sharing the spotlight with others latin artists such as CHANCHA VIA CIRCUITO or EVHA. This remix is from BEGUN, a producer from Barcelona who also gravitates in this musical family.

There’s a weird duality in club music, where the best songs often combine pounding, uplifting music with misery-soaked lyrics (see ROBYN‘s Dancing On My Own as the textbook example of this). This duality is something that Swedish duo RABBII have fully grasped and mastered in their own work (this isn’t the first time we’ve featured one of their anxiety-laden anthems). New Friends sees vocalist Johanna Berglund mourn the gaping hole left in her life by the absence of a close friend over high-octane, pounding beats and a thunderclash of pulsing synths. Perfect for those club nights where you’re stranded in the twilight zone between best night ever and collapsing into depression.

If I had to guess, I would imagine that Danish artist BABY BLOOD is a pretty big PEACHES fan. The abrasive production, take-no-prisoners approach to personal politics and costume aesthetic all owe a little to the Canadian legend. But BABY BLOOD is still very much doing her own thing, and Gender Science is a very fine example of what that thing is. Over sleazy, darkroom electronics she tears societal tropes apart by ‘fucking with gender’, making your prejudices her own personal playground. It’s unapologetically brash,and you won’t have to wait much longer for another helping, as her debut EP Await The Coven drops on Jun 17th on The Big Oil Recording Company.

If you are not tired yet of the fragile mixture of tender electronic beats and soulful songwriting in the style of JAMES BLAKE and SOHN, this young gentleman might be your new favourite pop darling. BADGER from Berlin is inspired by exactly the acts we just mentioned but still manages to sound a bit different. Especially the sweet build-up in the second half of his new single You And Me is really pleasing, we must say. And that’s just his debut single, girls and boys!

Icelandic trio SAMARIS dropped their new album Black Lights last week, and now we have a audio video for album cut T4ngled. T4ngled is a slinkly, murky synth-pop tune, one that creeps up on the listener like breath on the back of your neck. It’s accompanied by a video of bouncing, colourful shapes, echoing the cover of Black Lights. Black Lights is out now on One Little Indian Records and SAMARIS tour Europe this summer.

It feels a bit as if British newcomers TEN FÉ really can’t do wrong right now. They’ve already given us great hits like In The Air and Elodie in the past months. Now, they unfold a truly amazing remix of last summer’s Make Me Better. None other than the legendary UNKLE got their hands on the track, resulting in a hypnotic ride through a sea of electronics you won’t regret, trust us.

And for our final contender today we’d like to offer you a sweet dose of over-the-top power pop from EMYLE. The American songstress delivers finest dance pop with Drunk On You, somewhere between PET SHOP BOYS and the spirit of DONNA SUMMER’s I Feel Love. It might be a bit too much for those of you who are looking for edgy sounds but the rest will just dance along the sunshine with this tune. Don’t be ashamed to do so.