“A Moment In Time Captured”: Siv Jakobsen On The Sentiments Surrounding Her Second Album

Right from the beginning of our talk, I get the impression that Siv Jakobsen is one of these artists who are in the game of music for the sake of all or nothing. „I wanted this record to sound big and intense“, she assures me. „I wanted it to feel bigger, have higher feelings and bigger rooms almost“. However, it isn’t that the Norwegian musician is ready to leave her crafted realm of soothing, melodious flights on A Temporary Soothing just yet.

But that well-tuned charm is met with a sense of struggle, which Siv manages to render in expansive sonic frames. Following her 2015 debut EP The Lingering and her first record The Nordic Mellow (2017), her new record blends her willowy vocals with delicate folk arrangements that glimmer with comfort and redemption. However, one has to go down a long way before that emotional state truly kicks in, and this is also the story of A Temporary Soothing.

The conditions of art

We are probably all familiar with the idea of „the suffering artist“, without which modern pop culture would look significantly different. As much as the notion probably helps to put artistic achievements on a pedestal by mystifying the way from struggle to success, it can also be a huge obstacle, as Siv Jakobsen is eager to point out. She „worked through and figured out that glorious concept“ for herself, telling me how surprised people after her shows often reacted, when faced with her „content and balanced human nature“. A mirror that was quite irritating, to say the least.

“I have come to realise that I don’t believe you have to be sad all the time to create good art.” 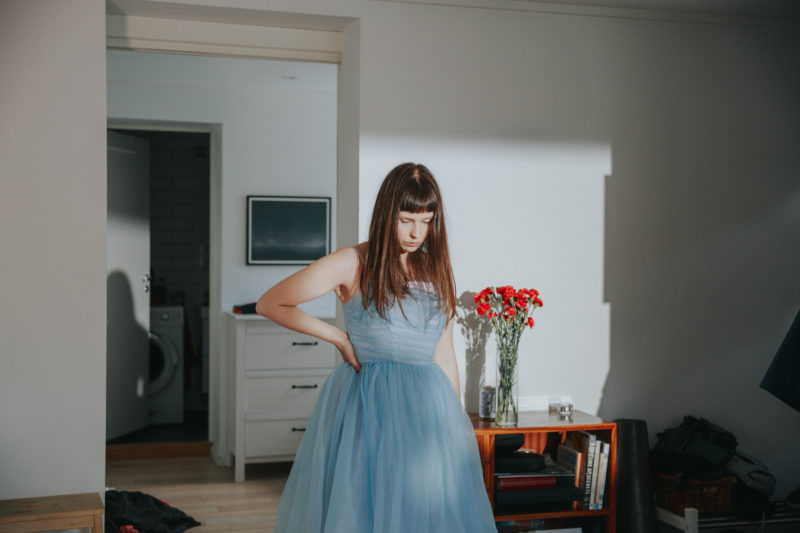 Working through these misconceptions is then a central argument of her writing on A Temporary Soothing and it is refreshing how she takes a stab at these fears. „I realised that I can write about pretty much any emotion“. These inner processes took up „a lot of space“, Siv admits. But in the end, the set of songs demonstrates the artistry of someone who has worked through these anxieties. Siv Jakobsen has found a way to challenge what she believed art could and should be. She has turned these struggles into something daring and authentic. And isn’t that what all art strives to achieve?

“It became a challenge for me to see how expansive my writing could be, that there were other things too. You don’t have to be heartbroken to write a record.”

The sound layers Siv Jakobsen has arranged, seem to go just right with the open and reflexive emotions of A Temporary Soothing. By trying to break free from former structures the artist enters new ground.

“My music up until this album has been very sparse, very close and intimate and acoustic. I really wanted to see what happened when I kept the intimacy but went about it in a different way.”

From the charged Fight Or Flight, the soothing guitar ballads Shine and Anywhere Else, the more upbeat Islands to the final piano-led I Call It Love, the harmonies shine on long after the last note. The songs open up space for newfound creativity and well-being amidst the challenges of fear and anxiety.

The two-fold nature of solace

Well aware of the album’s central image of a momentary solace, Siv Jakobsen develops a powerful play with the notion of being in a constant state of happiness. „The title comes from having the realisation that you cannot actually feel happy all the time“, she remarks. Instead, „if you strive for a good amount of it, a general happiness, that feels more real and more approachable“. With that in mind, the emotional ups and downs of the songs’ stories carry an underlying message of positivity and endurance in the face of struggles.

“The album is like a time capsule. I write to understand what’s going on in my life and in my own head. That’s why I feel such a need to write. It helps me declutter.”

And so, A Temporary Soothing comes across as a snapshot taking into account the beauty of harmonious moments, while also addressing the struggle that is part of the experience. On that note, Siv states that she wants „the album to be ‚a temporary soothing‘ to the listener, but not to make someone feel great all the time“. That surely is true, but for the time being she has given us at least some moments of bliss, born straight out of the fight and the emotional struggle.

“What will I write about if I don’t fear the fear?”
(Fear The Fear)

Siv Jakobsen‘s new record A Temporary Soothing arrives on August 21 via U OK?.